Raw Superstar Curt Hawkins came to NXT to try to even the score with the competitor who recently topped him on WWE Main Event, Aleister Black. Unfortunately for the self-proclaimed “Captain of the Star Factory,” his fate was no different than anyone else who has tried his luck against Black.

Employing a variety of strikes, the eerily composed Black connected with a high-flying quebrada before polishing off Hawkins with his Black Mass spinning heel kick, much to the delight of the sold-out Allstate Arena.

After weeks of building anticipation, the NXT Universe finally got its first look at The Velveteen Dream. Chicago's own Robert Anthony had the displeasure of experiencing The Velveteen Dream firsthand, and following the painful run-in, he might suffer nightmares for weeks to come.

Decidedly flamboyant in garb and posture, the captivating Superstar from Washington, D.C., proved to be a multifaceted threat right off the bat. Between verbally berating Anthony and clubbing him with punches, The Velveteen Dream broke out silky-smooth offense, including a dropkick and a top-rope elbow drop that finished off Anthony with the seriousness of a stake through the heart.

Former NXT Tag Team Champion and known roughneck Wesley Blake was looking for a fight when he targeted Drew McIntyre; the slayer from Ayr, Scotland, was all too happy to oblige.

The double-tough Texan mouthed off to McIntyre and immediately paid for it as the former Chosen One booted him square in the face. Still, Blake wouldn't go down easily, taking McIntyre off his feet with a big lariat and using submission holds, including a double wristlock and a cross armbreaker, to try to ground the 6-foot-5 Scotsman.

McIntyre, however, muscled out of every scenario Blake threw his way, and he eventually landed his single-leg Yakuza Kick to drop Blake and continue his undefeated streak. 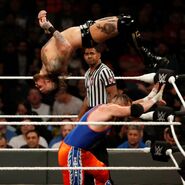 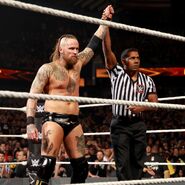 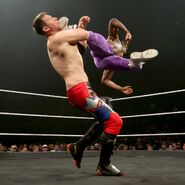 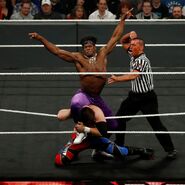 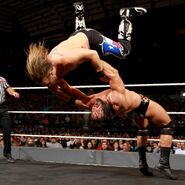