The May 22, 2017 Edition of RAW is a Professional wrestling television show of the WWE's RAW brand, which took place on May 22, 2017 at the Van Andel Arena in Grand Rapids, Michigan.

In just two weeks, Roman Reigns, Finn Bálor, Seth Rollins, Bray Wyatt and Samoa Joe will battle in an Extreme Rules Fatal 5-Way that just might change the course of the New Era. And apparently, none of them feels like waiting until then to fight.

In the middle of a match between Reigns and Wyatt — sanctioned by Kurt Angle after Reigns interrupted The Reaper of Souls’ opening sermon, wherein he claimed he was the only man who could defeat Brock Lesnar — Samoa Joe crashed the ring and locked The Big Dog in the Coquina Clutch, much to Wyatt's delight.

The interference made Reigns the winner via disqualification, and Joe doubled down by locking Wyatt in the hold when the former WWE Champion tried to Sister Abigail him for the second consecutive week. Moments later, Seth Rollins rounded out the fray, and the former Shield brothers expelled Wyatt and Joe from the ring, leading Angle to sanction a tag team match between Rollins & Reigns and Wyatt & Joe for later tonight.

The rivalry between Akira Tozawa and The Brian Kendrick will reach its apex tomorrow on 205 Live when the two Cruiserweights do battle in a Street Fight.

But The Man With a Plan remained relatively unmoved by the skills of his prospective “student,” even as Tozawa put on a clinic against the newly opulent Ariya Daivari on Raw. The Stamina Monster denied a game Daivari and put The Persian Lion away with a top-rope senton, and while Kendrick admitted he was impressed by Tozawa's display, he claimed he would one-up The Stamina Monster by "destroying" him on 205 Live tomorrow night, exclusively on WWE Network.

Elias Samson finally wandered through one too many confrontations on Raw when he interrupted Raw General Manager Kurt Angle's business, but The Olympic Hero had to be pleasantly surprised when his planned punishment for the roaming balladeer — a match with Dean Ambrose — instead turned into a showcase for Samson's abilities.

After foretelling The Lunatic Fringe's doom in song, Samson absolutely overwhelmed the Intercontinental Champion, much to the delight of The Miz at commentary. Ambrose managed to fight his way back and looked to have momentum on his side until Miz rushed the ring and cheap-shotted Samson, costing Ambrose the match on a disqualification ruling. (Remember, Ambrose will lose his title if that happens at Extreme Rules.)

The Lunatic Fringe gave chase to Miz, but Samson attacked from behind and administered a swinging neckbreaker to the champion, proving he'll stroll wherever he pleases and back it up when called upon, as well.

Conspicuous by his absence in Raw's opening four-way brawl was Finn Bálor, the fifth man in the high-stakes Extreme Rules Fatal 5-Way. But the Irish Superstar clearly caught the eye of one particular individual with a vested interest in the Fatal 5-Way: Paul Heyman.

The ensuing confrontation was, of course, a foreboding one, as Bálor will book a one-way ticket to Suplex City should he win the Fatal 5-Way and earn the right to challenge Heyman's client, Brock Lesnar, for the Universal Championship. But an unusually complimentary Heyman admitted that, while he viewed the rest of the field as little more than prospective “victims” for Lesnar, the idea of the fearless Bálor challenging The Beast Incarnate had him "intrigued." In fact, Heyman even went so far as to say that a Bálor victory was the outcome he was pulling for, wishing Finn luck on Lesnar's behalf. Bálor responded by giving Heyman a message for The Conqueror in return: That he would indeed win the Fatal 5-Way and reclaim the Universal Title that he never lost.

A confrontation with Paul Heyman will rile anybody up, but still, Finn Bálor's performance against Karl Anderson was nasty and efficient even by his standards on Raw.

Anderson, for what it's worth, gave as good as he got in this match, but Bálor dove over the rope onto both Anderson and Luke Gallows before administering the Coup de Grâce for the victory.

The rubber match of Raw's recent Sasha Banks-Alicia Fox series goes to The Boss, though she might not be as free of Alicia as she'd hoped.

The former Raw Women's Champion dispatched Fox in relatively short order to earn what she called her “freedom” from Fox's eccentricities. Alicia's boyfriend, Noam Dar, got in Banks’ face the second the match was over in defense of his lady love, which earned him a slap across the face. Foxy responded by blasting Banks from behind and knocking her to the mat with a Scissor Kick.

Apollo Crews’ budding stint in The Titus Brand has been paying dividends in the ring, but his tendency to seemingly fight Titus O'Neil's battles for him hasn't been sitting too well with Kalisto.

The King of Flight went so far as to ask whether or not the new-attitude Crews was behind a brutal sneak attack on Enzo Amore following their scuffle at the end of last week's Raw, a charge Crews vehemently denied.

Crews insisted that he was only partnered with Titus to keep his options open, but he certainly seemed to emulate The Big Deal's ruthlessness when O’Neil organized a match between the two after Kalisto refused to join the Brand. Titus’ nonstop instructions seemingly threw Crews off his game, however, and The King of Flight was able to capitalize with the Salida del Sol for the win.

Goldust may have abandoned his Tag Title pursuits for a return to eerie, directorial form, but reigning Raw Tag Team Champions The Hardy Boyz have swept their No. 1 contenders in singles action. Matt Hardy piggybacked off of his brother Jeff's win over Sheamus to hand The Alabaster Gladiator his second loss in the last two weeks, and this one came with a hefty price tag, too: It gave the Hardys the right to choose the stipulation for their title defense against Cesaro & Sheamus at Extreme Rules.

The Celtic Warrior had been rolling against Hardy, until a timely interference by Jeff gave Matt enough room to brawl his way back into the match. Jeff once again made his presence known, taking out Cesaro at ringside before The King of Swing could get involved and diverting Sheamus’ attention long enough for Matt to seal the win with the Twist of Fate. And what stipulation did they select for their troubles? A Steel Cage Match.

With the WWE Cruiserweight Title Match at Extreme Rules reconfigured into a Submission Match, the fate of the purple brand has come down to a battle of Last Chancery vs. Rings of Saturn. And while the former was enough to lead Austin Aries to a win on Raw, reigning champion Neville would not be so easily upstaged.

Facing off against Tony Nese, A-Double countered The Premier Athlete's impressive, impact-based offense with a wide array of submissions culminating with the Last Chancery — a hold that has come within a hair of beating Neville twice now.

After observing the action from ringside, Neville entered the squared circle following the match and trapped The Premier Athlete in the Rings of Saturn, sending an unmistakable message to his No. 1 contender: Anything you can do, I can do better.

Last week, Alexa Bliss went to town on Bayley with a Kendo stick and, while the attack led to a Kendo Stick on a Pole stipulation for their title rematch (short version: Whoever grabs the stick first gets to use it), it didn't sit well at all with The Huggable One's friend, Mickie James. So, the onetime La Luchadora attempted to teach the Raw Women's Champion a lesson on Monday night, though Bliss quickly flipped the syllabus on its head for the veteran Superstar.

It only took one big move to do it, too, as Mickie had been in the driver's seat for the majority of the match until The Goddess of WWE straight-up punched James in the face. Bliss pounced with her DDT to win the match, then produced the Kendo stick to dispatch James. She only got one hit in, though, before Bayley rushed the ring and seized hold of the equalizer, sending Bliss scurrying in wide-eyed terror.

It's every man for himself in two weeks at Extreme Rules, but on Raw's main event, two teams of the Extreme Rules Fatal 5-Way competitors had to coexist. That's a lofty goal, especially when the teams are Bray Wyatt & Samoa Joe (who've been trading cheap shots for two weeks) or Seth Rollins & Roman Reigns (everyone knows the history there).

Oddly enough, the newer team was the more polished one: Rollins & Reigns were arguing from the start over who would begin the match, and a miscommunication doomed the team after The Architect — who had singlehandedly been holding off Wyatt & Joe — caught an accidental shoulder block from Reigns following a missed Superman Punch. The action screeched to a halt following the ensuing disagreement, and Wyatt quickly hauled Reigns out of the ring and hit him with Sister Abigail, while Joe put The Kingslayer to sleep with the Coquina Clutch for the win.

Once again, conspicuous by his absence was Finn Bálor, who made it a point to tell Raw General Manager Kurt Angle that he wanted in on the action next time around. Finn asked for a match against one of the competing Superstars, and The Olympic Hero did him one better, sanctioning Bálor vs. Bray vs. Joe for next week's Raw, as well as a one-on-one showdown between Rollins and Reigns. 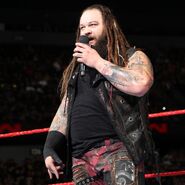 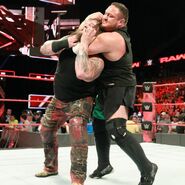 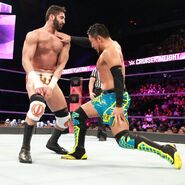 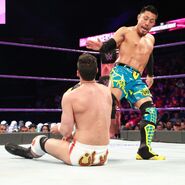 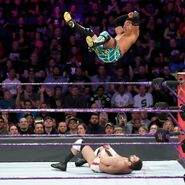 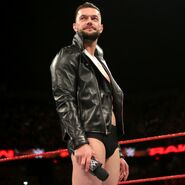 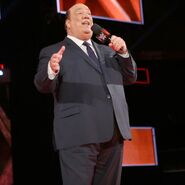 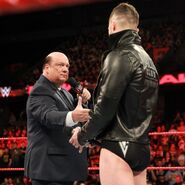 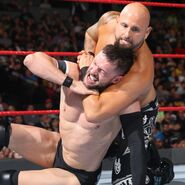 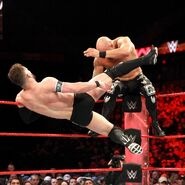 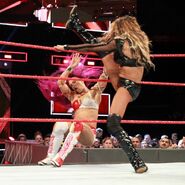 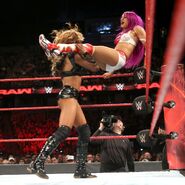 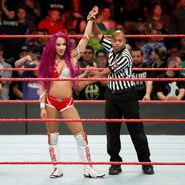 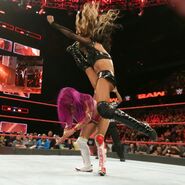 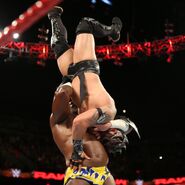 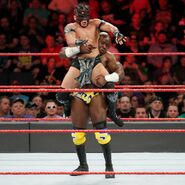 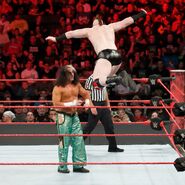 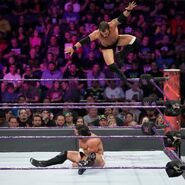 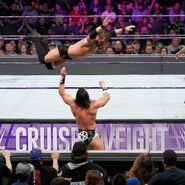 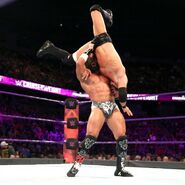 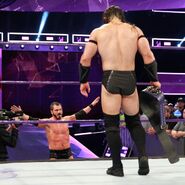 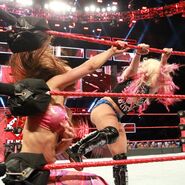 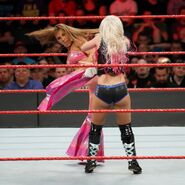 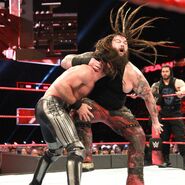 Retrieved from "https://prowrestling.fandom.com/wiki/May_22,_2017_Monday_Night_RAW_results?oldid=1560824"
Community content is available under CC-BY-SA unless otherwise noted.