May 27, 2011
The May 20, 2011 Edition of Smackdown is a Professional wrestling television show of the WWE's Smackdown brand, which took place on May 17, 2011 at the American Bank Center in Corpus Christi, Texas.

After a formidable fight from both Superstars, Christian escaped Sheamus’ High Cross and rolled him up for the pinfall. But before he could celebrate the win, Christian was attacked by Mark Henry. Next, Sheamus soon joined in the brutal assault. As the 2-on-1 beating continued, Randy Orton appeared at the top of the entrance ramp. A hesitant Viper watched the carnage from afar before finally rushing to the ring to help fend off Christian's attackers.

After recalling tangling with Kharma on Raw, Brie Bella picked up a victory over the hard-charging Natalya. Will Brie continue the momentum into WWE Over the Limit when she defends her title against Kelly Kelly?

Before the massive tag team bout began, Ezekiel Jackson spoke about how his recent attempt to walk away from The Corre was met with a beating. A fired up Jackson then led his behemoth team to victory by slamming Justin Gabriel five times during the match, then finally making him submit with a backbreaker. Can Jackson finally assert his independence with a win over Intercontinental Champion Wade Barrett on Sunday?

With tensions growing between Chavo Guerrero and Sin Cara – and a match between the two at WWE Over Limit looming – Chavo wanted to prove he was the better Superstar. To showcase his skills, Chavo set out to beat Daniel Bryan quicker than Sin Cara did last week. However, when the self-imposed five-minute limit was up, Chavo could not get the victory. Before he could ponder the loss, Chavo was downed by an attacking Sin Cara in one fell swoop. Is Chavo in for more of the same at WWE Over the Limit?

One week after being beaten in a match against Cody Rhodes, Ted DiBiase was surprisingly accompanied to the ring by the masked Superstar. After making DiBiase wear a paper bag over his head, Rhodes laid down some harsh criticism by saying “what once was a blooming flower, is now a wilted shrub.” After the rebuking was over, DiBiase took care of business against Trent Barreta, dispatching of him with Dream Street.

Newcomer Jinder Mahal continued to get in The Great Khali's face on SmackDown. After the verbal lashing, the focused seven-footer got an easy victory over Jey Uso with a Khali Chop followed up by a Punjabi Plunge. When Jimmy Uso stuck his nose in things, he too felt the destructive force of the Khali Chop.

World Heavyweight Champion Randy Orton was holding his own against The World's Strongest Man Mark Henry – until Sheamus decided to make a statement with a ruthless attack. After the match went to Orton because of a disqualification, Henry joined The Celtic Warrior in a vicious 2-on-1 assault on the recoiling Viper. As the brutality unfolded, Christian emerged at the top of the ramp, hesitated a bit, then decided to help the champion fight off his attackers. With the odds evening, an energized Viper took down Henry with a blistering RKO. After the dust settled, Christian and Orton celebrated with a handshake. But come Sunday, which Superstar will be celebrating a World Title victory? 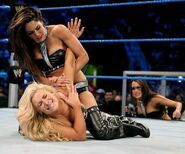 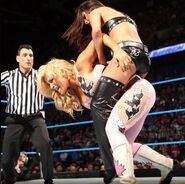 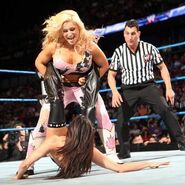 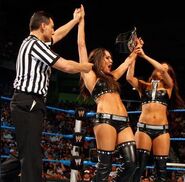 Retrieved from "https://prowrestling.fandom.com/wiki/May_20,_2011_Smackdown_results?oldid=1560814"
Community content is available under CC-BY-SA unless otherwise noted.