As the NXT Universe was still reeling from the major announcement that Samoa Joe and Finn Bálor's huge NXT Championship Match at TakeOver would be contested inside a steel cage, they were surprised for a second time this week, as two of NXT's newest stars joined forces for a big tag team encounter!

After Blake & Murphy rudely interrupted him in William Regal's office, the NXT General Manager granted Austin Aries a tag team match against Alexa Bliss’ charges, with a partner of his choice. “The Greatest Man That Ever Lived” made, perhaps, the best pick possible in the form of Shinsuke Nakamura.

The dissension brewing between Blake & Murphy spilled over into the beginning of the match, as Murphy tagged himself into the bout at the bell. Despite Blake offering to tag in, Murphy waved him off, which ended up being their undoing. Aries and The King of Strong Style picked Murphy apart.

The new partnership of Aries & Nakamura was not without a rough patch, though. Aries, who thinks he's been flying under the radar in NXT since Nakamura's arrival, stuck out his hand for a tag with Murphy on the ropes. However, the red-hot Nakamura ignored the offer, instead walloping Murphy with the Kinshasa to pick up the victory. Any potential discord between Aries and Nakamura seemed to be wiped away after the victory, as the two were all smiles in celebrating their victory.

However, that was not the case for Blake, Murphy and Alexa Bliss. Fed up with the former NXT Tag Team Champions’ recent shortcomings, Alexa threw up her hands and walked out on them. And, frustrated with his partner's behavior, Blake turned his back on Murphy and left him at ringside.

Carmella is certainly excited for Big Cass’ recent success on Raw and SmackDown, she is laser-focused on making her dream of becoming NXT Women's Champion come true. The Princess of Staten Island took her first steps toward making that happen this week. Surviving the ferocious tactics of “The Venus Flytrap of NXT” Peyton Royce, Carmella countered with feisty offense of her own and locked on an inverted triangle hold to win by submission.

With Blake & Murphy seemingly on the outs, there is an open spot for a duo to make an impact in the NXT tag team division. Johnny Gargano & Tommaso Ciampa look to be doing just that. Just a few weeks removed from their huge victory over The Vaudevillains, Gargano & Ciampa unleashed a staggering array of double team moves, including a superkick/running knee combination that devastated Rob Ryzin, on their way to a well-earned victory.

For the first time since TakeOver: London, Bayley squared off with Nia Jax. The former NXT Women's Champion once again showed no fear, going right after her much larger opponent. That looked to be paying off for Bayley early on, as she trapped Jax in a sleeper hold and sought to wear Nia down. However, the difference in power was too much for Bayley to overcome in the opening moments, as Jax hurled her around the ring with ease.

Jax continued to assert her dominance and overpower Bayley. The former NXT Women's Champion seemed to succeed when she could create space, eventually slamming Jax's head into the turnbuckles, but Nia returned the favor when she caught her, launching Bayley face-first into the corner.

The towering Jax focused her attack on Bayley's left arm, slamming it into the turnbuckles, headbutting it and wrenching away on it with a sadistic smile. Nia tried to squeeze the life out of her rival, but there was seemingly no stopping the resilient Bayley. The former champion battled back, stunning Jax and sending her to the arena floor.

The battle to counter Jax's power caught up with Bayley, as she struggled to get up with an injured left knee. Nia took advantage, crushing Bayley in the corner and following up with a devastating leg drop to the back of Bayley's head to earn an impressive victory. 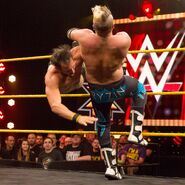 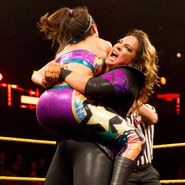