The May 17, 2000 Edition of WCW Thunder is a Professional wrestling television show of World Championship Wrestling's, which took place on May 16, 2000 in Lafayette, Louisiana.

The Filthy Animals get a new intro. 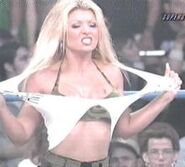 Lex Luger putting a trashcan over the head of Chuck Palumbo.

Norman Smiley and Ralphus are trying to sell some fake F. U. N. B. shirts.

The Cat hitting Terry Funk with a bag of popcorn.

Funk trashes the table as he gets yelled at by Norman Smiley.

Norman Smiley and Ralphus are arrested for selling bootleg T-shirts.

Tank Abbott walks out of his locker room with security.

The Monster truck drives away with Rick Steiner and Tank Abbott.

The Wall chases Shane Douglas with a table.

Arn Anderson rushes to the ring as the Four Horsemen music plays.

Vampiro burns a Sting mask while cutting a promo.

The ring ropes catch on fire.

Charles Robinson assists Ric Flair in getting out of the ring.

Members of the Millionaires and Misfits then walk to the bus and lift it on its side.
Add a photo to this gallery

Retrieved from "https://prowrestling.fandom.com/wiki/May_17,_2000_Thunder_results?oldid=1534010"
Community content is available under CC-BY-SA unless otherwise noted.