The May 16, 2017 Edition of Smackdown Live is a Professional wrestling television show of the WWE's Smackdown brand, which took place on May 16, 2017 at the SNHU Arena in Manchester, New Hampshire.

The New Face of America recapped his beatdown of The Ayatollah of Rock ‘n’ Rolla and predicted that he would deliver a similar pounding to AJ Styles with his title on the line this Sunday at WWE Backlash, but The Prizefighter couldn't get too far into his rant before being interrupted by The Phenomenal One.

The two opponents jaw-jacked over their impending United States Title contest in Chicago, with Styles suggesting that he and KO not wait until Sunday and get into it right now, until Owens’ scheduled guest for The Highlight Reel, Jinder Mahal, hit the scene.

Accompanied by The Singh Brothers, the No. 1 contender to Randy Orton's WWE Championship confidently declared that he would defeat The Viper for the title this Sunday. Disagreeing vehemently with The Maharaja's hot takes, The Phenomenal One prompted Owens to flee to the announce table before stating that it was time for the talking to cease and for everyone to bear witness to an actual highlight reel in his match against Mahal.

The No. 1 contenders for both the WWE and United States Titles clashed in the opening contest of SmackDown LIVE with The Singh Brothers by Jinder Mahal's side and United States Champion Kevin Owens on commentary, keeping a keen eye on AJ Styles.

After a competitive clash, the numbers game proved to be slanted too drastically in Mahal's favor, as The Singh Brothers distracted the referee, allowing KO to bolt from the commentary desk and nail Styles in the leg with his United States (of America) Championship. This led to Mahal connecting with The Khallas for the victory.

With “The Fashion Files” sweeping the WWE Universe by storm and Breezango's SmackDown Tag Team Championship Match this Sunday against The Usos drawing near, the No. 1 contenders have been on a hot streak (pun intended) that's seemingly unrivaled by anyone else on SmackDown LIVE. The Colons attempted to cool down the firestorm that is Tyler Breeze & Fandango, but to no avail on this night, as Fandango connected with the Falcon Arrow on Epico for the win.

After the contest, however, SmackDown Tag Team Champions Jimmy & Jey Uso appeared to literally read The Fashion Police their rights and warn them that in five days, it wouldn't be paranoia ... it would be, you guessed it, The Usos.

SmackDown LIVE Commissioner Shane McMahon was the moderator for the first-ever contract signing of its kind between the two teams that will compete in Six-Woman Tag Team action this Sunday at WWE Backlash: The “welcoming committee” of Carmella, Natalya and Tamina will clash with the team of SmackDown Women's Champion Naomi, Becky Lynch and Charlotte Flair.

As expected, both sides hurled insults, and a scuffle ensued after James Ellsworth started spouting off at the mouth about how Carmella was going to take Naomi's title ... and her GLOW!

The fracas resulted in Shane-O-Mac making a match between Naomi and Carmella to occur immediately.

Two weeks removed from pinning the SmackDown Women's Champion in a tag team match thanks in part to James Ellsworth getting involved, Carmella again stood toe-to-toe with Naomi fresh off their heated exchange from just moments ago.

It seemed as though the match took a turn in Naomi's favor when Ellsworth, and later Tamina and Natalya, were ejected from ringside by the referee. However, before Natalya and Tamina exited, they rebelled and ambushed Charlotte and Becky Lynch, leading to Naomi becoming distracted and allowing “Princess Mella” to take advantage and roll her up for the win.

Looking to keep pace with Jinder Mahal after The Maharaja's major win over AJ Styles earlier in the evening, WWE Champion Randy Orton faced off with one of SmackDown LIVE's finest, Baron Corbin, in the main event.

The ultra-physical and competitive contest saw The Viper prevail with an RKO, but the story would not stop there. After the bout's conclusion, Mahal hit the scene and attempted to distract Orton so that The Singh Brothers could blindside him. The Apex Predator initially fended off their attack, but the numbers game soon caught up to Orton when Mahal pounced and the three decimated him.

Mahal stood tall and raised the WWE Championship above his head ... was it perhaps a sign of things to come this Sunday? 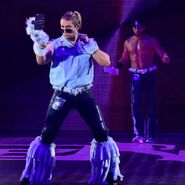 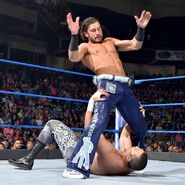 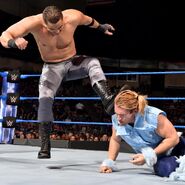 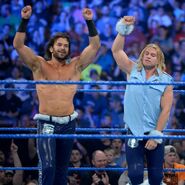 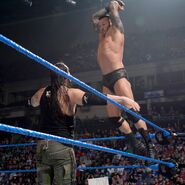 Retrieved from "https://prowrestling.fandom.com/wiki/May_16,_2017_Smackdown_results?oldid=1560792"
Community content is available under CC-BY-SA unless otherwise noted.