The May 15, 2017 Edition of RAW is a Professional wrestling television show of the WWE's RAW brand, which took place on May 15, 2017 at Prudential Center in Newark, New Jersey.

With WWE's overseas tour completed and half the Raw roster clamoring for the first crack at Universal Champion Brock Lesnar, Raw General Manager Kurt Angle laid out the parameters for the battle that could change the course of the New Era itself: It will be Roman Reigns, Finn Bálor, Seth Rollins, Bray Wyatt and Samoa Joe in a first-time-ever, every-man-for-himself Extreme Rules Fatal 5-Way to determine who will challenge The Beast Incarnate for the title.

Moments after The Olympic Hero made his announcement, all of the aforementioned Superstars arrived to confront each other in Raw's opening moments, and they didn't waste any time attempting to get a leg up on their opponents — in Rollins’ case, literally: In the ensuing fracas, The Kingslayer landed a blow on Joe's knee that sent him limping up the ramp, though it was Bálor who ended the fray with an over-the-top-rope plancha to Reigns and Rollins on the outside.

The days of polite handshakes in the Raw Tag Team Title race are over.

With the battle lines drawn once again between The Hardy Boyz and the new-attitude Cesaro & Sheamus, the Raw Tag Team Champions and their challengers deployed half their respective ranks — Jeff and Sheamus, to be exact — for a singles competition that lacked any of the tentative sportsmanship of their last cycle of matches.

In fact, Hardy started like a house on fire against The Alabaster Gladiator, only to find his aggression turned against him when Sheamus tossed Jeff into the barricade minutes into the match.

The Charismatic Enigma eventually clawed his way back after kicking out of a knee to the face that miraculously didn't knock out any more of his teeth. When The Celtic Warrior Brogue Kicked Matt Hardy off the apron (an unsuspecting Cesaro broke his fall), Jeff caught his opponent with the Twist of Fate and administered the Swanton Bomb. Hardys, one. Challengers, zero.

Sasha Banks pinned Alicia Fox last week, but the former Divas Champion had a shoulder up outside the ref's field of vision, which means Fox got another chance to exorcise her aggression against The Boss ... and this time, she won. With her Cruiserweight love interest Noam Dar at ringside, Fox deployed the full force of her strength against Banks, muscling out of a Bank Statement attempt and nailing Banks in the small of her back with a ruthless Scissor Kick to claim the win. And since a big win deserves a big celebration, Dar hoisted Fox on his shoulders and paraded her around the ring.

The Miz's tendency to get people riled up to the point of a blind, frothing rage didn't just land him on the wrong end of a Dean Ambrose beating — it cost him the Intercontinental Championship.

Granted, Miz technically won the match, but The Lunatic Fringe's excessive aggression was such that the ref was forced to throw out the contest, handing Miz the disqualification victory but allowing Ambrose to retain the title via champion's advantage.

It was a surprising ending to a match that had been a dead heat from the word jump, and things only took a turn when Maryse distracted the ref while Miz wound up for a massive low-blow on The Lunatic Fringe. Ambrose intercepted the attack and replied in kind with a Charlie Brown boot to The A-Lister's nether regions, only this time the ref was watching, and Ambrose was disqualified as a result.

Luckily for Miz, Kurt Angle was willing to give him another opportunity at the title at WWE Extreme Rules, but The A-Lister demanded, and received, further consideration, cajoling The Olympic Hero into adding the stipulation that the title can change hands via disqualification. The confrontation got a bit more heated than expected, but the reappearance of Elias Samson was enough to diffuse the tension.

Alexa Bliss’ Raw Women's Title victory tour has been a whirlwind of impeccable side-eye and scathing insults thus far, but the “Goddess of WWE” may have finally pushed her favorite target to the breaking point.

Moments into her evisceration of the city of Newark, Bliss was interrupted by former Raw Women's Champion Bayley, who announced she was exercising her rematch clause for WWE Extreme Rules, resulting in another round of bone-deep mockery by the champion, who insisted Bayley was too timid to get “extreme.”

It was enough for The Huggable One to shove Alexa out of the ring, but The Wicked Witch of WWE responded quickly, producing a Kendo stick from under the canvas and laying Bayley out with a single, surgical swing.

If The Huggable One wasn't quite ready for extreme, however, the good news is she'll have an opportunity at redemption: Following Alexa's attack, Bayley successfully petitioned Kurt Angle to add an extreme stipulation to their rematch, which he granted in the form of a Kendo Stick on a Pole Match.

Austin Aries and Gentleman Jack Gallagher have found themselves in Neville and TJP's crosshairs for weeks now, so it was only fitting that the two joined forces against The King of the Cruiserweights and his apparent protégé on Raw. Unfortunately for them, Aries’ bum knee put the team at a disadvantage, and Neville & TJP were working in perfect sync from the jump.

Neville would distract the ref and TJP would get in a few illicit punches on a staggered Aries, all the while keeping Gentleman Jack from the ring. When Gallagher eventually entered the fray, it looked as though he was in control of The Fil-Am Flash until things broke down into an all-out brawl.

When the dust settled, Gallagher landed his headbutt and teed up TJP for the “Gentleman’s Dropkick,” but Neville grabbed his ankle to thwart the maneuver. His No. 1 contender, Aries, clobbered The King of the Cruiserweights with the Discus Five-arm, but TJP capitalized nonetheless, landing a match-ending Detonation Kick on Gentleman Jack. And with a TJP-Aries showdown looming on tomorrow's 205 Live, Neville reassured TJP that they would end the "problem" A-Double has posed in advance of TJP's oft-hinted at title match.

Immediately after losing to Finn Bálor in their first-ever matchup last summer, Roman Reigns said he wanted another opportunity against the Irish dynamo. Well, he got it on Raw in the first of three Kurt Angle-mandated matches among Extreme Rules’ Fatal 5-Way competitors, and Reigns delivered on said opportunity, avenging his nearly year-old loss and defeating Bálor in Round Two.

Reigns fought like he had something extra to prove, stomping Finn into the corner and displaying the powerhouse strategy that might well win him a potential Universal Title clash, as it already helped put Braun Strowman out of action for up to six months. Bálor, of course, has a history with brawlers, and replied by bashing Reigns in the face and ribs with kicks that could find themselves connecting with The Beast down the line.

In this battle of speed vs. force, however, force ultimately won out. Despite tweaking his bad shoulder in a collision with the ring post, Reigns thwarted the Coup de Grâce by shoving Finn off the top turnbuckle and sealed the match with a last-gasp Spear.

Last week, The Golden Truth tried with all their might to get themselves back on the right track in Tag Team Turmoil and came up short. This week, Goldust decided he'd rather just run R-Truth off the rails rather than give it another try.

Even though Truth had finagled a match against Luke Gallows & Karl Anderson to help his team get their sea legs back under them, the bell never rang, as The Bizarre One laid out his partner at the end of their entrance. Goldust subjected Truth to a merciless beating before grabbing hold of the mic and declaring, “That’s what’s up.”

Titus O’Neil may not yet be reaping the full benefits of The Titus Brand, but it looks like Apollo Crews just might be.

After running afoul of Enzo Amore & Big Cass, O’Neil found himself wrangled in a match against Don Parmesan that was so unexpected (O’Neil had thought it was going to be Crews vs. Enzo and did a whole riff on Amore's intro), The Big Deal had to compete in his suit. Cass quickly disposed of the former WWE Tag Team Champion, but Crews wasn't about to let his mentor get disrespected without some payback.

When Enzo attempted to mock Titus’ post-match selfie routine with a snapshot over O’Neil, Crews obliterated Muscles Marinara with an enziguiri in a rare display of attitude (he also mocked Enzo's chicken dance in a rare display of cockiness), leaving the hometown hero shaken as he exited the Prudential Center.

There aren’t many more effective ways to rile up Seth Rollins than by calling him “gutless,” but that's exactly what Bray Wyatt did in advance of their first-ever singles match in Raw's main event, and The Kingslayer was out to make sure The New Face of Fear would regret it. Rollins won the match ... but not in the way he would have liked.

Rollins put Wyatt on his heels almost immediately in the show-closing clash, forcing The Reaper of Souls to fight from underneath and wear The Architect down with his unorthodox, punishing offense. Rollins hung in tough, escaping Sister Abigail and swooping down on Bray outside the ring with a cross body, at which point Samoa Joe stormed in from the crowd and attacked The Kingslayer as payback for injuring his knee earlier in the night.

The Samoan Submission Machine's interference didn't sit well with the disqualified Wyatt, who suckered Joe into a tentative alliance before hitting Sister Abigail on the unsuspecting big man. The Eater of Worlds then turned his attention to Rollins, also administering the maneuver to The Kingslayer.

So, this is where we leave five of Team Red's top Superstars: Primed to clash in the first-ever Extreme Rules Fatal 5-Way match in a battle that could potentially reshape the New Era with an opportunity to challenge Universal Champion Brock Lesnar at stake. With it being every man for himself, there will truly be nowhere to run. 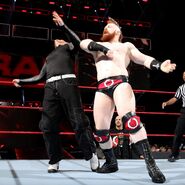 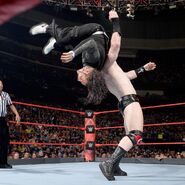 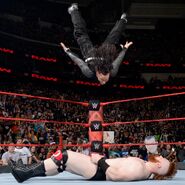 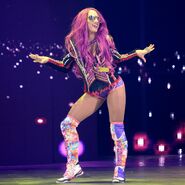 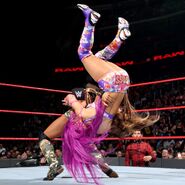 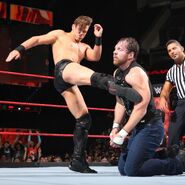 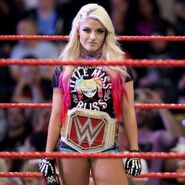 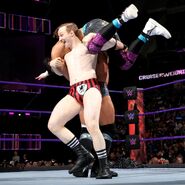 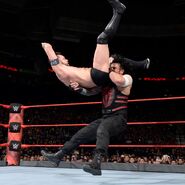 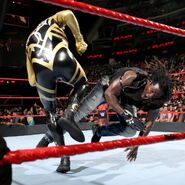 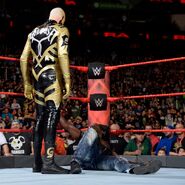 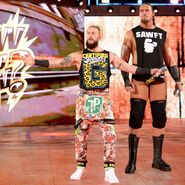 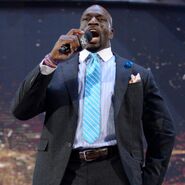 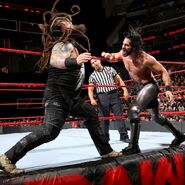 Retrieved from "https://prowrestling.fandom.com/wiki/May_15,_2017_Monday_Night_RAW_results?oldid=1560535"
Community content is available under CC-BY-SA unless otherwise noted.