The May 14, 2012 Edition of RAW is a Professional wrestling television show of the WWE's RAW brand, which took place on May 14, 2012 at CONSOL Energy Center in Pittsburgh, Pennsylvania.

Raw SuperShow began with WWE COO Triple H addressing Brock Lesnar. "Your arrogance and stupidity offend me,” The Game said then admitted he was embarrassed that he bought into the hype surrounding Lesnar. Giving props to John Cena, The Game then recalled how Cena did not give up and fought to victory against Lesnar at Extreme Rules.

Next, a tense standoff ensued when Paul Heyman, accompanied by a lawyer, hand-delivered Triple H a lawsuit from Lesnar. According to Heyman, Lensar is owed millions after his contract was breached. “Consider yourself served,” Heyman said after calling Triple H a “corporate sycophant.”

As Heyman and Triple H squared off, Heyman criticized The Game's business acumen. When emotions reached a boiling point, the COO grabbed hold of Heyman by the face. “You tell Brock Lesnar, he’s going to get everything he deserves,” Triple H said. But before things got even more physical, The Game relented and released his grip. As Triple H left ringside, Heyman threatened another lawsuit – assault and battery – and vowed to see the COO in court.

Less than a week before WWE Champion CM Punk will defend his title against Daniel Bryan at WWE Over the Limit, the champion tangled with his foe in tag action. And it was The Straight Edge Superstar who captured victory for his team over Cody Rhodes with a GTS ... all the while making sure Bryan kept close watch on his fast and furious offense against Rhodes.

With her WWE Over the Limit opponent Divas Champion Layla watching from the entrance ramp, The Glamazon dispatched of Alica Fox with a hard-hitting Glam Slam. After the victory, when Phoenix looked to dish out more punishment to Fox, Layla came charging in the ring, sending Phoenix from the ring. Who will prevail this Sunday when the two collide for the butterfly-emblazoned title at WWE Over the Limit?

Right in the middle of a battle between two of WWE's behemoths, John Laurinaitis ordered Big Show to apologize to him. The distraction opened the door for a chokeslam victory for Kane over The World's Largest Athlete.

After the match, the GM demanded an apology for Big Show making fun of his voice or he would be fired. With the ominous warning, Show took an emotional trip down the memory lane of his career and asked the GM to let him keep doing what he loves. When the GM was adamant that Show make a clear apology, Show obliged.

Next, the GM demanded Show get on his knees and beg to keep his job. But the visibly shaken and emotional World's Largest Athlete couldn't bring himself do it and begged not to be made get on his knees. Saying he'd do what is right for business, Laurinaitis said he reconsider Show's fate.

But as the GM walked away from the ring and appeared ready to fire the veteran Superstar, Show finally gave in, dropped to his knees and apologized for making fun of the GM's voice. When he asked the GM if he was happy, he got the news that stunned the WWE Universe. "No I'm not. As General Manager of Raw and SmackDown, I wish you the best in your future endeavors. And Show, you’re fired,” leaving The World's Largest Athlete weeping on his knees.

After the shocking firing, an emotional Show said his final goodbyes to the WWE Universe.

Zack Ryder will take on Kane in the WWE Over the Limit live Pre-Show event, which will stream on YouTube.com/WWE, Facebook and WWE.com Sunday at 7:30 ET/4:30 PT.

In a prelude to the tag title war to come at WWE Over the Limit, the WWE Tag Team Champions battled their foes in a six-man tag match. With his high-powered offense, Kofi Kingston blasted Miz with Trouble in Paradise, then Brodus Clay claimed victory for his team by decimating Miz with a monstrous splash. Watching the action from a skybox were A.W. and his All World Promotions clients Primo, Epico, Rosa, as well as potential client Mason Ryan.

As Chris Jericho and Randy Orton fought tooth-and-nail, the action spilled outside the ring, where World Heavyweight Champion Sheamus was seated at the announce table. During the fray, Jericho threw Orton into the champion, sending him crashing to the arena floor. When the fight resumed in the ring and Orton blasted Jericho with a DDT, he was poised for a final blow with an RKO. But before The Viper could strike, The Celtic Warrior pulled Jericho form the ring, ending the bout in a disqualification. Furious with the outcome, Orton lured Sheamus in the ring, where the two were ready to mix it up before having to be separated by WWE officials. Who will prevail when Jericho, Orton, Sheamus and Alberto Del Rio battle in a Fatal 4-Way Match for the World Title at WWE Over the Limit?

When John Laurinaitis called John Cena and his WWE Universe supporters "losers," Cena emerged to give the GM an earful. As he analyzed Laurinaitis’ achievements in his backstabbing rise to GM, Cena concluded the GM is nothing but a loser himself.

After riling the WWE Universe up about the potential beating coming to the GM at Over the Limit, the GM's Executive Administrator Eve came to the ring with a letter in her hand.

But before the GM could read the letter, Cena ripped it from his hands to reveal some shocking stipulations directly from the WWE Board of Directors:

“Your match with Mr. Cena will be one-on-one. There will be no special guest referee. No one is allowed at ringside. The only way to win is by pinfall or submission. Any Superstar who interferes in the match will be immediately terminated … Should you, Mr. Laurinaitis, lose this match to John Cena, then you will be officially terminated.”

With the stunning news, the WWE Universe exploded in approval. Then, when Cena questioned what major announcement the GM was reported to be making that would change the future of WWE, the GM slapped Cena and walked out of the ring and up the ramp. 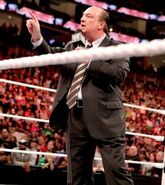 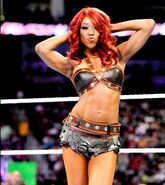 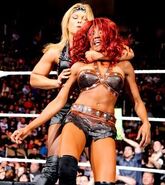 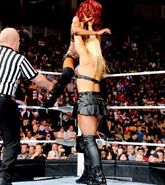 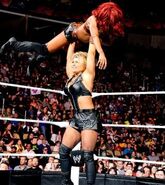 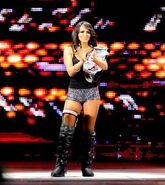 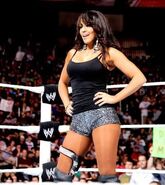 Retrieved from "https://prowrestling.fandom.com/wiki/May_14,_2012_Monday_Night_RAW_results?oldid=1560521"
Community content is available under CC-BY-SA unless otherwise noted.