Sha Samuels was the catalyst for an edge-of-your-seat Heritage Cup Rules Match between Nathan Frazer and Noam Dar, and he was also the difference-maker when the highflyer and The Scottish Supernova threw down in a grueling five-round bout.

With the score knotted at 1-1 in Round 5, Samuels grabbed the leg of Frazer, who was positioned on the ring apron while the official checked on Dar. Frazer eventually booted Samuels to the floor, but the delay gave Dar enough time to recover and dodge Frazer’s springboard dropkick. Seconds later, Dar blasted his foe with the Nova Roller to claim the win.

Round 1 concluded without either competitor scoring a decision, though Dar made sure to tattoo Frazer with a right elbow to the jaw after the bell. Frazer responded by getting the better of an exchange of pinning combinations, keeping Dar’s shoulders to the canvas for the 1-2-3 and taking a 1-0 lead less than a minute into Round 2.

After a scoreless Round 3, Dar earned a decision in Round 4 when he evaded Frazer’s attempt at a springboard moonsault and ensnared his opponent in a Kneebar to force a tapout, setting the stage for his controversial pinfall victory in Round 5.

Just a few weeks after the forming Subculture alongside Flash Morgan Webster and Dani Luna, Andrews was his typical acrobatic self against the powerful Levi Muir.

Muir had his opponent reeling with an uppercut and a torture rack, but Andrews scored the win with a Stundog Millionaire, a dive through the ropes, and a shooting star press.

Though she wasn’t originally slated to compete in the No. 1 Contender’s Gauntlet Match, Meiko Satomura nevertheless took advantage of the opportunity to sub in for the injured Xia Brookside and emerged triumphant over Emilia McKenzie, Isla Dawn, Dani Luna and Jinny to earn another title bout against NXT UK Women’s Champion Kay Lee Ray.

After making her typically cryptic entrance, Dawn kickstarted the marathon bout against McKenzie, her recent rival. Following a lengthy battle, The White Witch eliminated McKenzie with a kick to the face and a half-and-half.

Luna hit the ring like a ball of fire and immediately clocked Dawn with a kick to the head, but Dawn recovered in time to pick up her second elimination by rolling up her opponent after Luna crashed shoulder-first into the ring post.

To the surprise of the NXT UK Universe, Satomura next hit the squared circle as the replacement for Brookside, and she took Dawn out of the match by quickly transitioning from a submission hold to a pinning combination for the 1-2-3.

Accompanied by Joseph Conners, the calculated Jinny entered the bout hellbent on earning another title fight with Ray. And although she had Satomura reeling after sending her neck-first into the middle rope before spiking her into the mat, Satomura nevertheless booted the meddling Conners off the apron and planted Jinny with the Scorpion Kick to become the No. 1 Contender.

After the bout, Ray entered the ring and seemingly showed respect to Satomura in the form of a bow. When The Best in the World returned the gesture, however, she was greeted by a vicious kick to the face from The Forever Champion, who shouted “I’m the champion here, and no one is going to change that.” 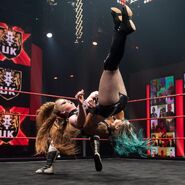