The May 13, 2011 Edition of Smackdown is a Professional wrestling television show of the WWE's Smackdown brand, which took place on May 10, 2011 at the Bridgestone Arena in Nashville, Tennessee.

One week after his career-long dream of being the World Heavyweight Champion was destroyed by a sudden title match with Randy Orton, Christian emerged. He stated to the WWE Universe that he respected GM Theodore Long's decision to make their World Title Match, congratulated WWE's Apex Predator on winning the title and made it clear that that their rematch at WWE Over the Limit will have a completely different outcome.

When Sheamus and Mark Henry both emerged and attacked Captain Charisma, Orton entered to even the odds, later stating that he wanted to face a 100 percent Christian at the fateful pay-per-view in nine days.

Before Sin Cara's match with Daniel Bryan could begin, Chavo Guerrero took it upon himself to introduce the newly drafted masked Superstar as "following in his footsteps." Joining the SmackDown announce team, he repeatedly referred to himself Sin Cara's "mentor."

But, after the high-flyer realized that his win over Bryan came – at least in part – because of a Guerrero distraction, a frustrated Sin Cara confronted the self-proclaimed "Mexican Warrior." After Guerrero stuck his finger in his chest, the explosive grappler shoved him to the canvas.

Layla informed the WWE Universe that during her match with Michelle McCool at Extreme Rules, she sustained a serious knee injury.

Following Michael Cole's interruption – which he used to talk about his rematch with Jerry Lawler at WWE Over the Limit – the mesmerizing Kharma emerged. Cole proceeded to trip Layla, allowing the monstrous anti-Diva to drive her to the canvas with absolute force. When Kharma focused her attention to the cocky announcer-turned-competitor, however, Cole quickly scrambled back to the safety of his glass fortress.

Just when it looked as if Kane had overcome distractions by The Corre and was set to chokeslam Intercontinental Champion Wade Barrett, Justin Gabriel and Heath Slater attacked. After giving The Big Red Monster the win by disqualification, his adversaries used their overwhelming numbers to take him down.

Moments later – one week after getting forcefully "excommunicated" from The Corre – Ezekiel Jackson exploded to the ring, delivering a major onslaught on his former allies before once again succumbing to their 3-on-1 assault. The punishment he endured culminated with Gabriel's 450 Splash.

Carrying the burden of his deep emotional scars, Cody Rhodes urged the WWE Universe – and even his former Legacy ally Ted DiBiase – to hide their faces with paper bags. Despite an ultra-competitive effort by the priceless Superstar, his bitter opponent ultimately reigned supreme with the Cross Rhodes.

After The Corre's massive assault on Ezekiel Jackson for the second week in a row, Wade Barrett poked his stick at the self-professed "The Personification of Domination" with an Intercontinental Title challenge.

On the same night that the World Heavyweight Championship rematch between Randy Orton and Christian at WWE Over the Limit was announced, the two Superstars found themselves working together in an explosive tag team main event. And as The Viper delivered a devastating RKO to Mark Henry, Captain Charisma hit the Killswitch on Sheamus for the victory. 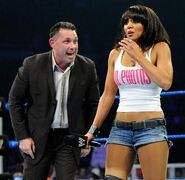 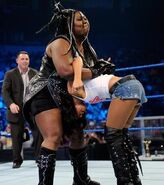 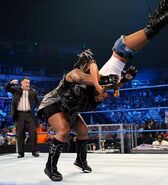 Retrieved from "https://prowrestling.fandom.com/wiki/May_13,_2011_Smackdown_results?oldid=1560514"
Community content is available under CC-BY-SA unless otherwise noted.