Finn Bálor made his long-awaited return to NXT this week, his first appearance since Samoa Joe ended his 292-day reign as NXT Champion. The Demon didn't mince words, saying that all of his matches with the submission specialist could have gone either way. But before he could elaborate, his opponent in the main event, Elias Samson, interrupted Bálor with a song mocking the former champion. Bálor put an end to the impromptu concert, silencing The Drifter with a Pele Kick ahead of their battle.

Returning to Full Sail University for the first time since capturing the NXT Tag Team Titles, American Alpha were given a hero's welcome by the NXT Universe. Jason Jordan & Chad Gable basked in the reception as they picked apart John Skyler & Corey Hollis.

Despite their opponents bending the rules, the champions rebounded as The Revival came to get a closer look at American Alpha. Jordan & Gable remained focused on the match and connected with Grand Amplitude on Hollis to earn the victory. The NXT Tag Team Champions dared Scott Dawson & Dash Wilder to get in the ring with them after the bell, but The Revival backed away, saying that now was not the time for their rematch.

Last week, Alex Riley said it was time to introduce Shinsuke Nakamura to real rage. This week, A-Ry got a first-hand introduction to strong style from the Japanese Superstar. Nakamura held nothing back in his Full Sail University debut, answering the mockery of Riley with a flurry of devastating strikes. The King of Strong Style put an exclamation point on the proceedings with the Kinshasa knee strike, which put A-Ry down for the three-count.

After disposing of third-generation competitor Tessa Blanchard several weeks ago, the small but fierce Alexa Bliss took on another pedigreed grappler this week in Rachael Ellering, the daughter of WWE Hall of Famer Paul Ellering. The newcomer nearly caught Bliss off-guard with a roll-up, but only enraged her opponent. Alexa targeted her offense on the arm of Ellering, punishing the second-generation competitor before putting her away with the Sparkle Splash.

After suffering through Samson's mockery earlier in the night, Bálor was eager to get his hands on The Drifter in the main event. The Demon wasted no time in going after NXT's resident songster, forcing Samson to retreat to ringside and regroup.

The Drifter soon took control of the bout, going after the heavily taped shoulder of Bálor. But with the NXT Universe behind him, Finn rallied and got his second wind, stunning Samson with a running kick on the ring apron, followed by the Sling Blade and the devastating DDT he calls 1916 to win the match.

With Samson silenced for the night, Bálor got to say what he'd wanted to say all night: He wants his NXT Championship rematch! The Demon said he's obsessed with getting the title back and will stop at nothing to do just that. Samoa Joe quickly arrived to say that Bálor did not deserve a rematch. Much to the champion's chagrin, NXT General Manager William Regal came out to announce that Bálor will get his rematch at NXT TakeOver on Wednesday, June 8! The Demon answered by diving over the ropes — and Regal — onto Joe at ringside. Bálor grabbed the NXT Title and told Joe to enjoy being champion while it lasts, because it won't last for long. Will The Demon make good on his promise at TakeOver in four weeks? 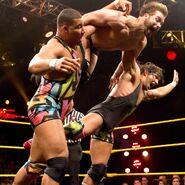 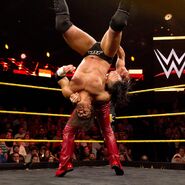 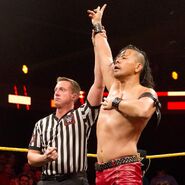 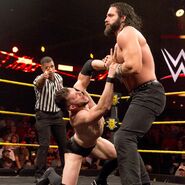 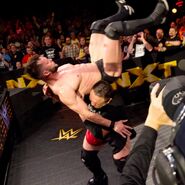 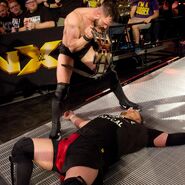