Aleister Black again emerged from the darkness just long enough to trounce the competition. In this case, Cezar Bononi, a WWE Performance Center standout from São Paulo, Brazil, was the unfortunate soul. After enduring a brief flurry from the 6-foot-6 Bononi, Black showed incredible speed and intuition, deftly dodging a series of strikes before landing two knees of his own and dropping Bononi with Black Mass.

A week after Heavy Machinery called out NXT Tag Team Champions The Authors of Pain, #DIY did the same, claiming that they're still due a two-on-two rematch. Self-proclaimed “Gifted Athletes” Tino Sabbatelli & Riddick Moss took objection — believing they, too, deserve a title opportunity — paving the way for an impromptu tag team bout between the pairs.

Boasting two of NXT's most impressive athletic backgrounds (Sabbatelli played six seasons in the NFL and Moss was a star linebacker for the University of Minnesota Golden Gophers), the blue-chippers used their insane physicality to put #DIY on their heels. Yet, Tommaso Ciampa & Johnny Gargano's well-honed teamwork ultimately won out as they clobbered Moss with the Meeting in the Middle for a pinfall victory.

Afterward, NXT General Manager William Regal announced that #DIY would, in fact, be the next challengers to Akam & Rezar, taking on AOP at TakeOver: Chicago. Though the Authors’ manager, Paul Ellering, insisted that such a ruling would spell the end of #DIY, Regal wasn't done yet, and he revealed the match on Saturday, May 20, will be a Ladder Match.

With a title opportunity against NXT Champion Bobby Roode at TakeOver: Chicago at stake, Roderick Strong wasn't short on grit, skill or motivation as he battled Hideo Itami. Instead, Strong simply learned what so many competitors before him have found out the hard way: Once Itami hits the Go-To-Sleep, there's no coming back.

In an epic clash that divided the NXT Universe, Itami and Strong left it all in the ring. Full Sail University broke into dueling chants of “Let’s go, Roddy” and “Hideo” as the two would-be contenders traded big hits. For every punch, kick or elbow Itami landed, The Messiah of the Backbreaker responded with some form of a spine-wrenching slam including, at one point, a backbreaker onto the edge of the ring apron.

As the action approached the 20-minute mark, Strong popped Itami on the jaw with a leaping knee strike. But some three years after his blockbuster signing with NXT, Itami had come too far to let an NXT Title Match slip through his fingers. Itami repaid Strong with a hesitation dropkick in the corner before hitting the GTS for the hard-fought win. In the ultimate show of sportsmanship, Itam then helped Strong to his feet and held his hand high before leaving the ring with The Glorious One in his crosshairs.

Strong's night wasn't over, yet, however. After the broadcast ended, WWE.com cameras stayed glued to the action. SAnitY swarmed the ring and laid out the exhausted Superstar in a brutal beatdown, begging the question: Why has NXT's chaotic contingent renewed its focus on Roderick Strong? 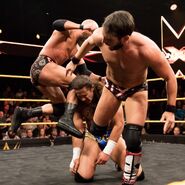 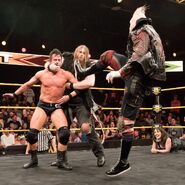