The May 1, 2017 Edition of RAW is a Professional wrestling television show of the WWE's RAW brand, which took place on May 1, 2017 at the Golden 1 Center in Sacramento, California.

Alexa Bliss DDT’d her way into history last night when she defeated Bayley to win the Raw Women's Championship, and on Raw, she proved it wasn't a fluke. In fact, The Wicked Witch of WWE pinned Bayley again, though this time it was in an Eight-Woman Tag Team Match following a heated confrontation during Bliss’ “coronation” in Raw's opening moments.

The match was initially scheduled as a straight-up tag team match, but given that the “Goddess” Bliss offended everyone, Emma, Alicia Fox, Mickie James and Dana Brooke were allowed to join the fray in addition to the previously-announced competitors.

Despite the presence of Nia Jax, Bayley rallied her team in a final blitz against Bliss, but things broke down fast when the women started throwing hands indiscriminately. Bayley's efforts to assist Sasha Banks in ejecting a feral Fox gave Bliss the opening she needed to pounce, raking Bayley across the eyes and once again executing a textbook DDT. The coronation continues.

Following his and Big Cass’ victory over Luke Gallows & Karl Anderson at Payback Kickoff, Enzo Amore predicted singles victory against Gallows in “uno momento in Sacramento.” It didn't look like it was going to go that way after The Suntan Biker Man jumped Muscles Marinara from behind before the match, and it really didn't look like it was going that way once order was restored and Gallows tossed Enzo around the ring like a rag doll. It did look for a brief second like it was going to go Enzo's way when he hit Gallows with the field goal kick. But then Karl Anderson got involved, distracted Big Cass and all Gallows needed was uno momento to hit a fireman's carry flapjack on Enzo for the win.

With Seth Rollins and Finn Bálor both impressing last night at WWE Payback, the field for the Universal Championship has suddenly gotten very crowded.

Both Superstars made it very apparent that their long-term goal is to challenge Brock Lesnar for Raw's resident heavyweight title, as The Architect has never won it and Bálor was forced to relinquish it due to injury just 24 hours after becoming the first-ever Universal Champion.

Dean Ambrose was quick to break up the confab, claiming that he, as Intercontinental Champion, held the No. 1 prize on Raw and would be happy to defend it against either Seth or Finn. That brought out The Miz, who once again ran Ambrose down for The Lunatic Fringe's perceived slights against what became Miz's signature championship over the last year. So, Ambrose devised a simple solution: He called Raw General Manager Kurt Angle from the ring and got him to sanction a Triple Threat Match tonight between Rollins, Bálor and Miz, with the winner to be named his No. 1 contender.

It's been a rough couple of weeks for Gentleman Jack Gallagher. The beloved Cruiserweight has found himself beset and besieged by Neville and TJP at every turn, but the dapper Cruiserweight got a second wind beneath William the Third when he scored the deciding pinfall in a Six-Man Tag Team Match featuring his fellow Cruiserweights.

Gallagher's teammates, Rich Swann and Akira Tozawa — toting William the Fourth and Fifth, respectively — spent the majority of the match mixing it up with their respective rivals, Noam Dar and The Brian Kendrick, with Tony Nese batting cleanup.

In the late goings, Gallagher tagged in against Kendrick and began throwing headbutts left and right, both against The Wizard of Odd and an interfering Nese. After Tozawa saved Gallagher from the Captain's Hook with a Shining Wizard to Kendrick's head and teamed with Swann to dispose of Nese and Dar, Gentleman Jack sealed the deal with the "Gentleman’s Dropkick" to Kendrick in the corner.

Cesaro & Sheamus may have relieved Jeff Hardy of a tooth at WWE Payback, but they did not manage to wrest the Raw Tag Team Titles from The Hardy Boyz. They ... didn't take it well.

In fact, the post-match beatdown of the champions by “The Swiss Cyborg” and “The Alabaster Gladiator” was so brutal that they were greeted with a sea of contempt from the WWE Universe on Raw that Cesaro & Sheamus were more than happy to return.

Of course, Cesaro & Sheamus’ denigration of the WWE Universe's supposed obsession with the past at the expense of the present and their promise to send the “novelty act” Hardyz packing did not go unanswered long. Matt & Jeff, hungry for a melee, faced their foes and made a beeline for the ring, but Cesaro & Sheamus scurried away, opting instead to fight another day.

Apollo Crews may be looking to The Titus Brand to turn his win-loss record around, but the cost of that partnership is apparently that he isn't allowed to fraternize with Heath Slater.

After Titus O'Neil took issue with Crews’ backstage chitchat with “the enemy,” his protégé battled The One-Man Band in singles action — Slater's first Raw match since the Superstar shake-up. The friendly if competitive match ended with Slater (who, for what it's worth, had the unmitigated support of the WWE Universe) eating the Spinning Sit-out Powerbomb, but Rhyno got some small measure of payback against his teammate's opponent: When Titus and Crews went for another post-match selfie, The Man Beast photobombed the shot. At least Crews seemed more receptive to the selfie than he did last week. Maybe his fortunes really have begun to turn.

At WWE Payback, Roman Reigns and Braun Strowman brutalized each other to an unfathomable degree, and Raw General Manager Kurt Angle set aside some time to address the in-ring futures of both Superstars.

In short, they're both hurt — Reigns re-aggravated his injured ribs and suffered other internal injuries, while Strowman tore his rotator cuff — but they're not done with each other. Yet before he could expand on what the future holds for the two heavy-hitters, The Olympic Hero's plans were quickly upended by the arrival of Bray Wyatt.

The Eater of Worlds has, surprisingly, kept mostly a low profile on Raw since coming over in the Superstar Shake-up, but with Randy Orton finally in his rearview, Wyatt was ready to formally take control of Team Red. He offered Angle the chance to “walk by his side” while he acted as the “savior” to the WWE Universe. The Olympic Hero didn't quite refuse Bray's offer of co-existence, but he was quick to remind the former WWE Champion that Raw was his show. The Reaper of Souls replied simply: “This may be your show, but I need you to understand: This is my world.”

Austin Aries may have the strongest case for a WWE Cruiserweight Title Match against Neville given the controversial events of WWE Payback, but TJP will not be ignored.

Emboldened by the promise of a title match should he take care of Aries, TJP certainly made the most of his opportunity against A-Double, punishing Aries’ knee to the degree that he was barely able to stand.

And yet, Aries still prevailed, countering out of the Detonation Kick to lock in the Last Chancery for a submission victory. After the match, a furious TJP chop-blocked Aries’ knee from behind and locked in a figure-four Kneebar that left Aries howling in agony. To paraphrase Booker T, Neville told TJP to solve the problem. Doesn't mean he had to win the match.

One night after denying The Miz entry into The Bálor Club, Finn Bálor has joined the ranks of The A-Lister's own club of vanquished foes.

Granted, the Irishman's unwitting entry into that group was helped along by a third party that paid his membership fee, but the climax of Raw's thrilling Triple Threat main event saw The Miz become the first man to pin Bálor in WWE, becoming the No. 1 contender to Dean Ambrose's Intercontinental Championship in the process.

In fact, two interferences paved Miz's road to victory: Seth Rollins was the third man in the Triple Threat and was on a roll among rolls when Samoa Joe crashed the match and flattened him with a Uranage on the outside. Rollins’ exit teed Bálor up for a run of offense that had him within a hair of the win, at least until Bray Wyatt showed up and blasted him with Sister Abigail, allowing Miz to pin Bálor and claim the victory. 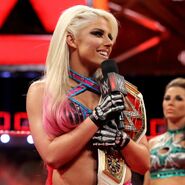 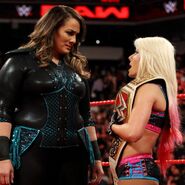 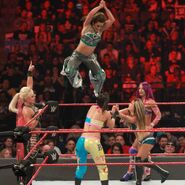 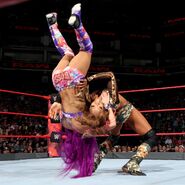 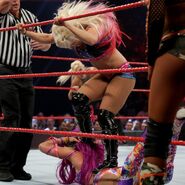 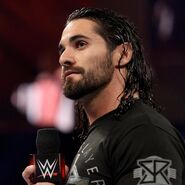 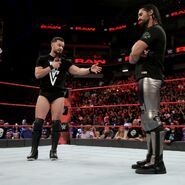 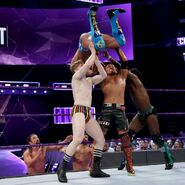 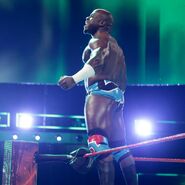 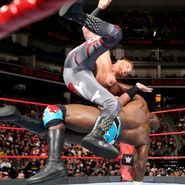 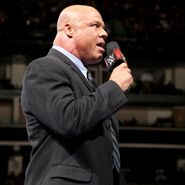 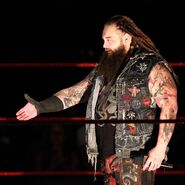 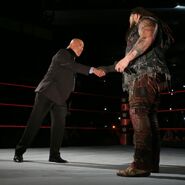 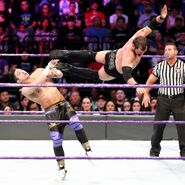 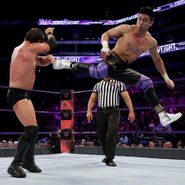 The Miz vs. Seth Rollins vs. Finn Balor

Retrieved from "https://prowrestling.fandom.com/wiki/May_1,_2017_Monday_Night_RAW_results?oldid=1560496"
Community content is available under CC-BY-SA unless otherwise noted.