March 16, 2016
The March 9, 2016 Edition of NXT is a Professional wrestling television show of the WWE, which took place at the Full Sail University in Winter Park, Florida on February 27, 2016.

NXT General Manager William Regal had an action-packed Wednesday night planned for the NXT Universe. Fans were treated to exactly that, but not quite in the way Regal had planned. What was scheduled to be a show featuring American Alpha, The Vaudevillains, NXT Women's Champion Bayley, Asuka and more was instead taken over by a single match – the 2-out-of-3 Falls war between Sami Zayn and Samoa Joe to determine the No.1 Contender to Finn Bálor's NXT Championship.

With a crowd that included WWE Hall of Fame Class of 2016 member Michael P.S. Hayes, 2015 inductee Larry Zbyszko, Sasha Banks, Hideo Itami, SmackDown lead announcer Mauro Ranallo and Tool guitarist Adam Jones watching on, Zayn and Joe stepped into the ring to finally settle the score and see who would be next in line to challenge the NXT Champion.

Knowing they were in for a grueling battle, the two competitors took their time sizing each other up, not wanting to waste any unnecessary energy. Zayn and Joe traded control back and forth during the first fall as the feeling-out process continued, until Samoa Joe cinched in a tight headlock to take Zayn down to the canvas. Zayn used his speed to catch Joe off-guard and reverse the tide of the bout, forcing the submission specialist to retreat to the arena floor and regroup. After responding with a series of vicious strikes, including a devastating running boot to the face, Samoa Joe had Zayn dazed and continued his onslaught.

The first fall continued on with Joe pummeling Zayn, though The Underdog from The Underground showed signs of life. Zayn sent Joe back to the arena floor, following him out with a springboard moonsault. However, Zayn may have bit off more than he could chew when he attempted to hit Joe with the Blue Thunder Bomb. Zayn continued to fight on, but Joe caught him with a devastating slam out of the corner and the Muscle Buster to win the first fall.

Joe pressed on at the start of the second fall, pouncing on Zayn and trying to hit the Muscle Buster once again. Samoa Joe was relentless in his attacks, but there was no accounting for the heart of Sami Zayn. Samoa Joe tried to win the second fall and the match by count-out, hurling Zayn into the ring steps and slamming him into the unforgiving concrete floor, but there was no keeping Zayn down. The re-energized former NXT Champion battled back, suplexing the 280-pounder before taking flight with a beautiful dive over the ropes. Back in the ring, Zayn managed to lock on the Koji Clutch in the center of the ring, leaving Joe with no option but to tap out.

With the bout even at one fall apiece, the two battle-worn competitors met in the center of the ring, trading wild blows before Zayn finally connected with the Blue Thunder Bomb. Zayn began throwing everything in his arsenal at the submission specialist, including a diving DDT through the ring ropes. Despite that, Zayn could not put Joe away. Desperate, Zayn tried to put Joe to sleep with his own Coquina Clutch, but Joe managed to escape. The Underdog from the Underground stayed on top of Joe, hitting the exploder suplex into the corner, but Samoa Joe evaded the Helluva Kick and locked on the Coquina Clutch, forcing Zayn to pass out in the constricting hold. After a grueling battle, Samoa Joe is now the No. 1 Contender to the NXT Championship and is destined for another showdown with Finn Bálor at TakeOver: Dallas on April 1! 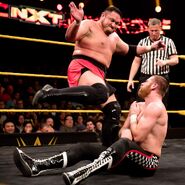 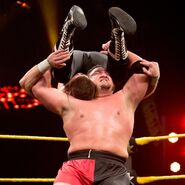 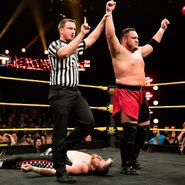 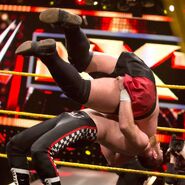