The March 9, 2012 Edition of Smackdown is a Professional wrestling television show of the WWE's Smackdown brand, which took place on March 6, 2012 at the Mohegan Sun Arena in Uncasville, Connecticut.

In charge of SmackDown for the night and ready to make an impression out of the gate, board-appointed GM John Laurinaitis started Friday night off by having Santino put his newly crowned United States Title on the line in a steel cage against the Superstar he won it from four days earlier, Jack Swagger.

After getting bit by the champion's Cobra through the chain links, a meddling Dolph Ziggler was summarily ordered to leave ringside by the outside referee. Then, when Vickie Guerrero accidentally slammed the cage door on her All-American American client's head, Santino once again shocked the world, escaping the daunting structure to win his first title defense.

Though Theodore Long fired Drew McIntyre one week ago, acting GM Laurinaitis gave him an opportunity to regain his job against a “mystery opponent.” While, at first, it looked like that competitor might be an emerging Great Khali, David Ortunga soon revealed that it was actually a very reluctant Hornswoggle.

In the one-sided carnage that followed, the referee had no choice but to stop the match, deciding that Swoggle could not continue. As a result, McIntyre earned his job back. However, the gigantic Khali offered his own version of congratulations to the newly rehired grappler, delivering a powerful post-match Punjabi chop to Drew as he celebrated.

Fresh off being inducted into the International Sports Hall of Fame this past Saturday, Mark Henry triumphed over The Personification of Domination Ezekiel Jackson with the World's Strongest Slam.

One week after John Laurinaitis’ stunning announcement that he might put Theodore Long's girlfriend Aksana in a match against Kane, the board-appointed SmackDown GM set up a match between himself and Teddy. He then added a special stipulation that if Mr. Long emerged triumphant, Aksana would have to face The Big Red Monster after all.

Once the bell rang in their match, Laurinaitis told Teddy to “lay down.” When his proud opponent refused, “Mr. Excitement” called Kane down to the ring. But, as The Devil's Favorite Demon was about to enter the squared circle, Randy Orton came from nowhere and hit the horrific Superstar with the RKO. As an exasperated Laurinaitis turned his attention to The Viper, Teddy seized the opening and rolled up his GM counterpart for the three-count.

Before the defeated Laurinaitis could follow through on his threat to have Aksana face Kane, Teddy and the beautiful Diva made their way out of the building.

In spite of Epico's attempt to thwart his opponents’ momentum in the final seconds of the match and a distraction from the stunning Rosa Mendes, Kofi Kingston & R-Truth put on a high-octane display, culminating with Truth's explosive Flatliner on Primo for the huge non-title victory over the WWE Tag Team Champions.

In a tension-filled interview with Michael Cole, Daniel Bryan insisted that his winning the World Title – and the string of success he'd had since – had nothing to do with luck. Instead, he credited the combination of his scientific in-ring ability, Vegan lifestyle, charisma and sex appeal.

While Sheamus conceded that he himself had experienced his share of the "Luck of the Irish," he went on to claim that his WrestleMania opponent had been hiding behind his girlfriend AJ. After entertaining the WWE Universe with a series of insults aimed at the submission specialist, The Great White assured Bryan that his luck would finally run out at The Show of Shows.

In the critical final minutes of the six-man tag team main event, Big Show chased his WrestleMania adversary – Intercontinental Champion Cody Rhodes – to the back while Sheamus brought the fight outside the ring to his Showcase of the Immortals foe – World Heavyweight Champion Daniel Bryan. This left legal Superstars Randy Orton and The Miz inside the squared-circle to settle things. And after WWE's Apex Predator escaped the Skull Crushing Finale, he would ultimately rise above, executing the RKO on his outspoken opponent for the three-count.

As the smoke cleared, the monstrous Kane once again emerged to engage The Viper. Fueled by their combined fury, the battle between the two brutal forces of nature reached new heights, as they launched into an uncontrollable onslaught that quickly spread into the crowd. 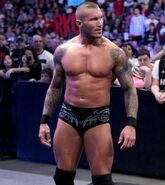 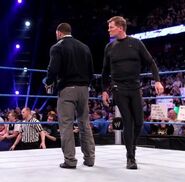 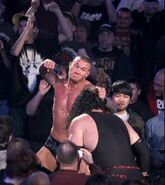 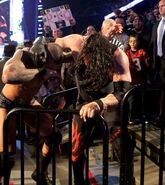 Retrieved from "https://prowrestling.fandom.com/wiki/March_9,_2012_Smackdown_results?oldid=1602277"
Community content is available under CC-BY-SA unless otherwise noted.