The March 8, 2004 Edition of RAW is a Professional wrestling television show of the WWE's RAW brand, which took place on March 8, 2004 at the Harbor Yard Arena in Bridgeport, Connecticut.

The Rock came to Bridgeport to celebrate the life of Mick Foley and the fact that WrestleMania would be where it all begins... again, for the Rock ‘n’ Sock Connection. By the end of the evening, it looked as if the pay-per-view event could be the end for this legendary duo if Evolution had their way. As much as the Foley/Rock tandem still represents one of the most formidable tag teams to ever enter the ring, Evolution still had strength in numbers... and on RAW, it showed when Evolution destroyed the Rock 'n' Sock Connection, ruining The Rock's "This is Your Life" segment to honor Mick Foley.

While Evolution had all of the confidence in the world heading into Sunday's pay-per-view event, it is Christian who had perhaps earned the right to be cocky above all others. Despite her absence from RAW to continue rehabilitation, Trish Stratus played a central role in Christian getting the best of Chris Jericho not once, but twice. After an earlier sneak attack by Christian on Jericho while Jericho spoke with Stratus on his cell phone, Jericho lost his match to Steven Richards when Stratus's music suddenly started playing and Jericho turned to look at the entrance ramp ... only to find that it was Christian who was entering the arena. With Jericho's back turned, Richards rolled him up for the pinfall victory.

Elsewhere on RAW, perhaps the most stirring single moment during the Road to WrestleMania took place at the beginning of the evening when a casket was placed in the ring. The site of the casket brought out Kane, thinking that perhaps the Undertaker was lying inside. Kane's efforts revealed an urn inside the casket that led to an angry declaration that it will take more than an urn to defeated Kane at WrestleMania. And the powers from beyond proved that Kane will face more than just an urn at WrestleMania when the lights dimmed, the gong sounded, and the earth moved, literally. Kane was stunned when the very ring below his feet was lifted in the air, proving that Kane will face more than an angry opponent at WrestleMania, but the spirit and soul of the Undertaker who Kane thought he had finished off.

Also on RAW, Stone Cold Steve Austin dropped a bombshell when he announced that he would go to SmackDown to reclaim his ATV that was towed thanks to Brock Lesnar a week before. 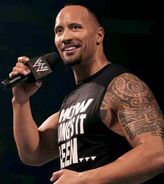 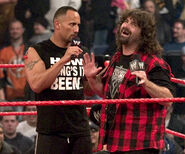 Retrieved from "https://prowrestling.fandom.com/wiki/March_8,_2004_Monday_Night_RAW_results?oldid=1560265"
Community content is available under CC-BY-SA unless otherwise noted.