The March 31, 2011 Edition of Superstars is a Professional wrestling television show of the WWE, it will be taped at the Allstate Arena in Chicago, Illinois on March 29, 2011.

Trent Barreta may not be competing at Sunday's WrestleMania, but the talented young Superstar showed the WWE Universe that he might be in the main event of The Show of Shows someday with his amazing performance on tonight's “WWE Superstars.” Going up against his longtime rival, Curt Hawkins, the dynamic Barreta put his body on the line with a series of high-risk maneuvers to stop his opponent. But it was a well-timed Dudebuster DDT that finally gave Barreta the big win.

The Divas may be beautiful, but sometimes their matches can get pretty ugly. That was definitely the case in tonight's “WWE Superstars” main event as the stunning squad of Eve, Natalya and Gail tried to stop the nasty tactics of Melina and her vicious Bella buddies. The talented trio nearly won out, but that was before Nikki and Brie pulled their classic “Twin Magic” switcheroo. With the Divas Champion distracted, the sisters switched places, allowing Nikki to nail Eve with a Bella Buster for the victory. Or maybe it was Brie? 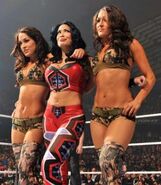 Retrieved from "https://prowrestling.fandom.com/wiki/March_31,_2011_Superstars_results?oldid=1560175"
Community content is available under CC-BY-SA unless otherwise noted.