April 6, 2016
The March 30, 2016 Edition of NXT is a Professional wrestling television show of the WWE, which took place at the Full Sail University in Winter Park, Florida on January 27, 2016.

The road to TakeOver: Dallas made its final stop at Full Sail University, just two days before the hottest brand in sports-entertainment invades the Lone Star State. Many of the competitors set for action during Friday's extravaganza took to the ring Wednesday night to make final adjustments before the biggest night of their careers. Who came out looking strong heading into the historic WWE Network broadcast?

The red-hot duo of Jason Jordan & Chad Gable are laser-focused on capturing the NXT Tag Team Championship this Friday in Dallas. Nothing could knock American Alpha off the championship trail, though the hungry pairing of Corey Hollis & John Skyler tried. Jordan & Gable picked their opponents apart in impressive fashion before pinning Hollis with Grand Amplitude for the victory. Though it certainly won't be an easy task, can American Alpha do the same to The Revival in Dallas?

With the prospect of ruining Austin Aries’ debut looming just days away, Corbin was out to make quick work of his opponent this week. He did just that. The Lone Wolf turned his opponent inside out with a huge clothesline before unleashing his fury, finishing his off his overmatched foe with the Deep Six. Not finished, Corbin connected with End of Days after the bell, sending a message to Aries about what awaits him Friday night.

Scott Dawson & Dash Wilder have been riding high since capturing the NXT Tag Team Titles, and tonight was no different. Though they had every right to look past their opposition and toward American Alpha, The Revival did not. The champions dominated their opponents in vicious fashion, picking up the victory with the Shatter Machine, and showing Jordan & Gable that taking the titles from them will be a tall task.

Alex Riley has been out to show the NXT roster what a real Superstar looks like, but he faced a tough challenge in fan favorite Apollo Crews. The ridiculously athletic powerhouse absorbed everything A-Ry had and bounced back, connecting with a huge dropkick and hoisting his 250-pound rival up for a big toss powerbomb to get the three-count.

Crews had no time to celebrate, though, as Elias Samson entered the arena strumming away on his six-string and crooning a haunting ballad at Crews. Apollo has been daring The Drifter to drop his guitar and fight for over a week, but once again, Samson drifted away. However, Crews and the NXT Universe know that Samson can't run away forever.

After being put to sleep at the hands of Samoa Joe last week, Bull Dempsey was out for payback against the submission specialist. However, there was no stopping Joe. As his NXT Championship showdown with Finn Bálor draws closer, Samoa Joe is only getting more furious. Dempsey came out swinging, but Samoa Joe swung harder. Joe took Dempsey's best and walked through it, clobbering the 300-pounder with strikes of his own before locking on the Coquina Clutch to win by submission.

Joe had to be pried off of Dempsey by members of the NXT locker room, who were then demolished by the angry Samoan. Joe locked the Clutch on Bull again as NXT General Manager William Regal implored Joe to release the hold. The No. 1 Contender refused to let go, until Bálor rushed to the ring and began pummeling his top challenger.

There was no separating these two heated rivals, though officials and NXT Superstars tried. Bálor and Joe brawled throughout the arena, where no one was safe. Joe hurled the NXT Champion over the announcers’ table, taking out Corey Graves. Bálor brushed off the nasty fall and dove off the table onto Joe, unleashing a flurry of strikes that was answered in kind by the challenger. Officials finally pulled the two apart after the brawl spilled back into the ring, leaving the NXT Universe wondering if Dallas is big enough to contain the carnage these two will create at TakeOver. 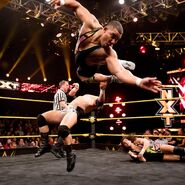 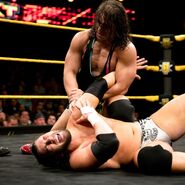 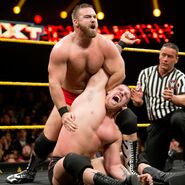