The March 28, 2016 Edition of RAW is a Professional wrestling television show of the WWE's RAW brand, which took place on March 28, 2016 at the Barclays Center in Brooklyn, New York.

At WrestleMania this Sunday, The Undertaker will battle Shane McMahon inside Hell in a Cell. If Shane emerges victorious, he will not only gain control of Raw, but the match will also mark The Phenom's last at The Show of Shows.

With that in mind, Undertaker returned to WWE's flagship show, making it clear it would not be his last at The Showcase of the Immortals. He then insinuated that Mr. McMahon's comments about him last week may lead to The Chairman of WWE's blood being on his hands and that Shane McMahon will rest in peace in “his yard.”

Before he could finish his ominous tirade, Shane-O-Mac interrupted, saying that when the vicious war is done, he will stand tall over the “instrument of destruction” as the “instrument of change” that WWE needs. He made it clear he would go through Hell against The Deadman and leave in control of Monday Night Raw.

Inevitably, the tension between them soon turned volatile, as WWE's prodigal son attacked The Phenom. The Demon of Death Valley gained control and nearly powerbombed his adversary through the announce table. Instead, Shane escaped and delivered an earth-shattering diving elbow off the top rope onto Undertaker through the announce table! But that may not be as stunning as when The Undertaker actually rose up moments later.

Ready to take on six other Superstars in an Intercontinental Ladder Match on The Grandest Stage of Them All, Zack Ryder had to battle the Superstar who held that illustrious title nine times, Chris Jericho, on Monday's Raw. The contest came as a result of an earlier confrontation when Jericho confronted Long Island Iced-Z and claimed he wasn't good enough for a WrestleMania moment. Before Jericho got into the ring, however, AJ Styles emerged to demand that Jericho give him the WrestleMania match he wants. While Jericho brushed him off, Styles refused to leave until he got his answer.

In the final moments of the match that followed, Styles began an insulting chant with the WWE Universe, causing a distraction that allowed Ryder to pick up the huge upset win over The Ayatollah of Rock ’n’ Rolla.

The livid Jericho wasted no time in delivering a Codebreaker to the victorious Ryder before accepting Styles’ WrestleMania challenge — warning his adversary that this Sunday will be the worst day of his life.

Just days before their Triple Threat Divas Championship Match at WrestleMania, ex-best friends Becky Lynch and Divas Champion Charlotte went one-on-one on Raw. At ringside sat Sasha Banks, who scored a huge pin fall on Charlotte Thursday night on SmackDown, After that match, Becky followed up with back-to-back Bexplexes on The Boss and Charlotte, before Sasha hitting a Backstabber on the war-torn titleholder.

On Raw, interference from Ric Flair allowed Charlotte to score a victory over The Irish Lass Kicker with Natural Section. But, who will be victorious when the three Divas clash for the butterfly-emblazoned title in an epic Triple Threat Match this Sunday?

But the bell would not bring an end to the action. Mark Henry, Jack Swagger, Fandango, Damien Sandow, Tyler Breeze, Darren Young, The Ascension, Goldust and R-Truth all proceeded to charge the ring and give the WWE Universe a preview of the Battle Royal to come this Sunday at The Show of Shows. But in spite of the numbers, Big Show and Kane stood tall in the end — delivering a double Chokeslam to The World's Strongest Man before hitting rarely seen quadruple chokeslam on The Social Outcasts.

After being attacked by Roman Reigns in the parking lot last week on Raw, WWE World Heavyweight Champion Triple H returned, along with a fired-up Stephanie McMahon. They demanded respect from the WWE Universe and stood ready to address The King of Kings’ imminent showdown against Roman Reigns in the main event on WrestleMania this Sunday

Making it clear that the WWE World Heavyweight Championship is what The Grandest Stage of Them All is all about, Triple H said The Big Dog's two World Title reigns are nothing compared to his own obsession, which made him the 14-time World Champion and the “greatest WWE Superstar in history.” The Game said Reigns lit the fire of his obsession again when the black-clad competitor powerbombed him through the table and that his No. 1 contender has already lost.

When Reigns interrupted and the two clashed, however, the battled-tested ring general was sent heading for the hills.

This Sunday at WrestleMania, WWE Tag Team Champions The New Day will battle The League of Nations on The Grandest Stage of Them All. But first, Kingston engaged The League's Alberto Del Rio in an absolute Raw slugfest.

Prior to the match, The New Day informed the WWE Universe that Booty-O's is now the official cereal of WrestleMania and described how unappealing a League of Nations’ cereal would be. They then busted a rhythm in honor of the late great Phife Dawg of “A Tribe Called Quest” about how “New Day rocks!”

In the height of the one-on-one encounter that followed, Kingston countered Del Rio's Cross Armbreaker to pick up the quick three-count. But the real surprise came moments later. As The New Day was celebrating, WWE alumni and ESPN host Jonathan “The Coach” Coachman made a surprise appearance, announcing “SportsCenter” will feature live cut-ins this Sunday on ESPN at WrestleMania!

Looking to get ready for his title match against Ryback at The Show of Shows, United States Champion Kalisto went to battle against another big man, The Ascension's Konnor. And after disposing of Viktor, the high-flying Superstar defeated his opponent with Salida del Sol.

As the dust was still clearing, The Big Guy emerged and stood toe-to-toe with the titleholder. As it turns out, Ryback's appetite would be satisfied with mind games for the time being, screaming “feed me more” before making his exit.

Can Kalisto possibly overcome his massive No. 1 contender at The Showcase of the Immortals?

Following the carnage in which he took out both Dean Ambrose and The Wyatt Family on SmackDown, Brock Lesnar came to Raw. The outspoken Paul Heyman made it clear that not even a lunatic could survive against Lesnar in a No Holds Barred Street Fight. The Beast would take the weapons available to him and perform an unpleasant procedure on Dean Ambrose.

Ambrose soon interrupted with a wagon, completely ignoring The Conqueror as he proceeded to fill it with a crowbar, a steel pipe, nun chucks, “Barbie” the barbed wire baseball bat from Mick Foley, the chainsaw from Terry Funk and the top portion of the ring steps.

At WrestleMania, 10 Divas will collide in a huge tag team match in which the “Total Divas” will go head-to-head with the group that calls themselves “B.A.D. & Blonde.” The only problem was that the Total Divas were still one competitor short six days out.

In the meantime, Raw featured a singles match featuring Paige — flanked by Brie Bella, Alicia Fox and Natalya — against Emma — flanked by Naomi, Tamina, Lana and Summer Rae. And in the height of the action, Lana took advantage of the chaos that formed outside the ring to kick The Diva of Tomorrow and set Emma up for the win.

When the action continued after the bell, though, Eva Marie surprised the WWE Universe, emerging from NXT to help the Total Divas thwart their adversaries.

At WrestleMania, Kevin Owens will put his Intercontinental Title on the line in a Ladder Match against Dolph Ziggler, Sami Zayn, The Miz, Sin Cara, Zack Ryder and Stardust.

In a furious Raw war for Show of Shows momentum, Ziggler, Zayn & Sin Cara joined forces against Owens, Miz & Stardust. In the final moments of a match filled with explosive moments, Owens’ consistent refusal to be an effective tag team partner finally caught up with him. When The Prizefighter attempted to escape a confrontation with Zayn, The Awesome One and The Cosmic Superstar opted to take a page out of KO's book, and walked out on him. This left Owens to suffer Zayn's Helluva Kick and a huge loss heading into WrestleMania.

After WWE World Heavyweight Champion Triple H and The Dudley Boyz delivered a brutal assault to No. 1 contender Roman Reigns backstage, The Game and Stephanie McMahon once again came before the WWE Universe. This time, they made it clear that at WrestleMania, the World Title and the power structure absolutely will not change.

But a Big Dog would not be denied, especially one with the aggression of Roman Reigns. A ruthless brawl instantaneously broke out between the two Superstars. This brought The League of Nations and The Dudleys to the ring, trying to pull Reigns off The King of Kings. A barrage of Superstars joined the mix after. As numerous competitors worked to reestablish order, Reigns leaped over the top rope onto both Triple H and the mass of Superstars. Without a doubt, the main event at WrestleMania cannot be missed.

The Authority prepares for Mania 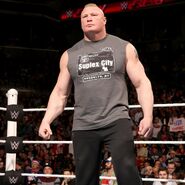 Retrieved from "https://prowrestling.fandom.com/wiki/March_28,_2016_Monday_Night_RAW_results?oldid=1560139"
Community content is available under CC-BY-SA unless otherwise noted.