April 1, 2014
The March 25, 2014 Edition of Main Event is a Professional wrestling television show of the WWE, it was shown live on the WWE Network at the TD Garden in Boston, Massachusetts on March 25, 2014.

With Christian out of action on WWE Main Event, Dolph Ziggler battled Intercontinental Champion Big E in a fierce title contest. Plus, ten of WWE's battling beauties competed for momentum, en route to The Grandest Stage of Them All.

Despite winning the opportunity to battle Big E for the Intercontinental Championship on Raw, it was revealed on Main Event that Christian had sustained a slight concussion during the intense Raw Fatal 4-Way Match and could no longer compete.

As a result, Sheamus, Alberto Del Rio and Dolph Ziggler – Captain Charisma's opponents on Monday night – faced-off in a Triple Threat Match to name a new No. 1 Contender. While all three Superstars left everything they had on the canvas in the subsequent free-for-all, the unbridled determination on Ziggler helped him hit the Zig Zag on Del Rio for the pin – just as The Mexican Aristocrat was executing a backstabber on Sheamus.

After the dust cleared, The Showoff lived up to his name, vowing to Renee Young that he would win the Intercontinental Championship later in the show as well as the Andre the Giant Memorial Battle Royal at WrestleMania. But as he shook hands with the calm and collected Big E, the WWE Universe was reminded that that would be no small task.

However, before Tamina could enjoy her important win, Divas Champion AJ Lee suddenly leaped from Main Event announce table and into the ring to raise her bodyguard's ’s hand – essentially stealing her spotlight in the process with a huge smile.

With the Intercontinental Championship on the line, Big E and Dolph Ziggler went head-to-head in a knockdown, drag out struggle for the title . While they fought tooth and nail from start to finish, in the end Big E managed to kick out of the Famouser and blasted his resilient challenger with The Big Ending.

After the bell, the two fierce competitors hugged in a gesture of incredible mutual respect as Main Event came to a close. 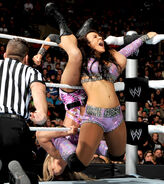 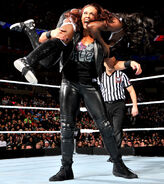 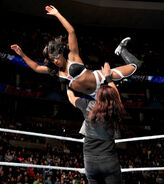 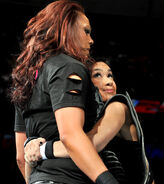