March 30, 2016
The March 23, 2016 Edition of NXT is a Professional wrestling television show of the WWE, which took place at the Full Sail University in Winter Park, Florida on January 27, 2016.

With just nine days left before TakeOver: Dallas, the stakes have never been higher in NXT. Finn Bálor set out to prove that he's ready to weather Samoa Joe's worst in the Lone Star State, while the submission specialist sent a message to the NXT Champion in brutal fashion. Meanwhile, Asuka looked to continue along the path of destruction that led her to a showdown with NXT Women's Champion Bayley in Dallas, taking on Emma in the main event.

The undefeated Elias Samson sought to silence another opponent this week, as he took on a favorite of the NXT Universe, Johnny Gargano. Johnny Wrestling had a little trouble countering The Drifter's raw aggression at first, but quickly found his footing in the bout by introducing his boot to Samson's head. Though The Drifter had Gargano well scouted, Johnny Wrestling surprised Samson with a roll-up, handing the mysterious Superstar his first loss!

A furious Samson blindsided Gargano after the bell, attacking him at ringside and yelling “I am what they need!” before slamming Gargano into the ring post. The Drifter continued his vicious beatdown until Apollo Crews arrived on the scene. Crews dared Samson to step up and fight, but The Drifter backed away.

NXT newcomer Rich Swann may have been in the mood for dancing as he made his way to the ring, but NXT Champion Finn Bálor was laser-focused on preparing for his rematch with Samoa Joe at TakeOver: Dallas. Bálor was aggressive from the get-go, taking Swann down to the canvas within seconds. The newcomer tried to escape the NXT Champion's grasp, but Bálor would not let go.

Swann finally slipped out of Bálor's clutches and stunned the champion with a hurricanrana, but Bálor cut the highflyer off before he could take to the air. The NXT Champion continued to unleash his rage on Swann before connecting with the Coup de Grace. Bálor was not finished, putting an exclamation point on his victory by spiking Swann on his head with a devastating DDT. Bálor showed a new side of himself this week, but will it be enough to put Samoa Joe away in nine days at TakeOver: Dallas?

While NXT Women's Champion Bayley and Asuka focus on their Dallas showdown, the rest of the crowded division is jockeying to make an impression and earn the next title match. Newcomer Sarah Dobson connected with a dropkick early in the bout, but that only infuriated the small but fierce Bliss. Alexa quickly took control of the bout, stomping Dobson into the canvas. Dobson may have been able to take control after catching Bliss with a wild knee off the top rope, but Blake & Murphy made their presence felt, distracting the referee and moving Bliss out of Dobson's way, giving Alexa the opening to hit the Sparkle Splash for the win.

Bull Dempsey was ready for battle on WWE Network, but the Bull-Fit innovator never even got the chance to step in the ring, as Samoa Joe ambushed him on the ramp. The submission specialist put Dempsey to sleep with the Coquina Clutch before storming the ring and introducing Danny Burch to the same fate. The rampage was a precursor to Joe sending a simple message to Bálor ahead of TakeOver: Dallas: “You will not survive!”

Emma was out to see that The Empress of Tomorrow didn't make it through today without knowing that she runs things in NXT. However, Asuka kept her rival at bay with the threat of her devastating kicks. Emma got a little too confident early on, leaving her susceptible to Asuka's unusual offense, which nearly ended the bout on several occasions.

Any time Emma looked to be in the driver's seat, Asuka quickly took control of the match back, trapping Emma in a variety of painful submissions. Emma finally turned the tides when she reversed The Empress of Tomorrow's ankle lock, sending Asuka crashing to the arena floor. The Australian competitor employed a smart strategy, keeping Asuka grounded, preventing her from unleashing her strikes.

Emma did everything in her power to neutralize Asuka, including having Dana Brooke attack her when the referee was distracted. However, there was no stopping The Empress of Tomorrow, who rallied back to unleash her fury on Emma. A frustrated Emma tried to steal the victory by pinning Asuka with her feet on the ropes, but was caught by the referee. After that, there was no escape for Emma, as The Empress of Tomorrow cinched in the Asuka Lock to win the battle. Will Bayley meet the same fate at TakeOver: Dallas? 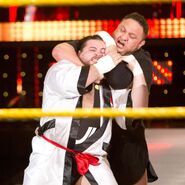 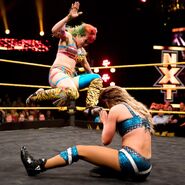