The Venue at UCF

After catching Andrade “Cien” Almas bullying HoHo Lun at the WWE Performance Center last week, Oney Lorcan dared the luchador to try to bully him. The Boston bruiser was in no mood for Cien's antics at the start of their battle this week, lighting Almas up with a series of vicious chops.

“El Idolo” took control of the battle after a few well-placed strikes and tried to get in Lorcan's head by slapping him in the face. Almas even baited Lorcan into diving to the outside, only to catch his rival and slam him into the arena floor. Though Lorcan did his best to end Cien's bullying, the aggressive Almas walked out with the victory after clobbering the bruiser with double knees in the corner, followed by his patented hammerlock DDT.

With a little over a week remaining before her showdown with Ember Moon at TakeOver, Asuka used this match to warn The War Goddess of what awaits her. Priscilla Zuniga tried to fend off her opponent, but The Empress of Tomorrow brought pure devastation, eventually forcing Zuniga to tap out to the Asuka Lock.

After the bell, a furious Asuka grabbed the microphone and offered a preview of what she believes will happen at TakeOver: Orlando: “No Eclipse.”

Tye Dillinger's quest to end SAnitY seemed to be a lost cause. Though he's had help from No Way Jose & Roderick Strong in recent weeks, the numbers game always leaned in favor of Eric Young and his maniacal crew, especially when Nikki Cross got involved.

That seemed to once again be the case this week. Despite the valiant efforts of The Perfect 10 and his friends in an action-packed Six-Man Tag Team showdown, chaos reigned. The official lost control of the bout as all six Superstars brawled in and around the ring. Amidst the turmoil, Dillinger finally had Young to himself in the squared circle and unloaded on SAnitY's ringleader until the screaming Cross climbed on his back.

Things looked bleak for The Perfect 10 until a mysterious woman rushed to the ring and went right after Cross. A vicious kick to the face neutralized Cross, allowing Dillinger, Jose & Strong to leave the rest of SAnitY reeling.

While the identity of the newcomer is still unknown, The Perfect 10, No Way Jose and Strong seem to be glad she's arrived in NXT, as the odds have been evened against SAnitY for the first time ever. 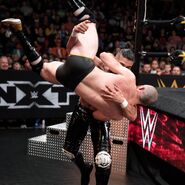 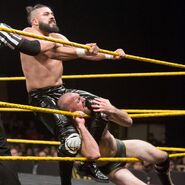 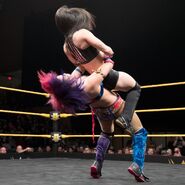 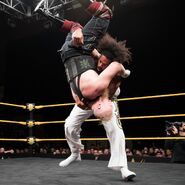 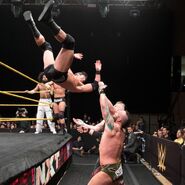 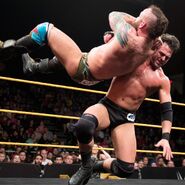 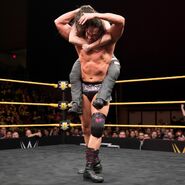