The March 21, 2016 Edition of RAW is a Professional wrestling television show of the WWE's RAW brand, which took place on March 21, 2016 at Wells Fargo Center in Philadelphia, Pennsylvania.

Having left Triple H in a pile of flatscreen fragments and stitches last week, Roman Reigns has now set his sights on The Authority's power itself. Despite Stephanie McMahon's continued bravado in the face of The Big Dog's warpath, Reigns certainly did his part to stake his claim on The Authority's territory in Raw's opening moments. Not only did he more or explicitly promise Ms. McMahon that he would dethrone The King of Kings at WrestleMania, he blocked Stephanie's attempt at a retaliatory slap to the face. Yep. He is ready.

Kevin Owens is having quite the eventful night, and it isn't even over yet: First, The Prizefighter was placed into a non-title bout with AJ Styles — itself a rematch of their SmackDown instant classic — which was summarily derailed by the interference of Chris Jericho at ringside. Then, Jericho's jeers of “A-J-Styyy-les!” and interruption of the Calf Crusher helped Owens win with a rollup. But KO's night wasn't over by a long shot.

In the middle of his post-match victory speech, a boastful Owens was besieged by Dolph Ziggler, The Miz and Sami Zayn, all in the hunt for an Intercontinental Title Match at WrestleMania. Surprisingly, Owens not only kept his cool, but he also made lemonade out of thin air by getting Stephanie McMahon to sanction a Triple Threat Match to determine his one, true KO-Mania opponent. Smart, Owens. Smart.

What began as a Twitter war between The New Day and The League of Nations has turned into a full-blown WrestleMania rivalry, and thus far the Power of Positivity is rolling strong. Not only did the WWE Tag Team Champions roast The League of Nations in astounding fashion before Big E's tilt with Rusev, but New Day overcame their inherent numbers disadvantage to help E turn the former U.S. Champion into Bulgarian booty.

The League of Nations certainly did their part to neutralize New Day's teamwork by taking out Kofi Kingston and Xavier Woods at ringside. It wasn't enough. Not only did Woods rally to take out Alberto Del Rio and King Barrett, but Kofi Kingston surged back in the clutch to nail Rusev with a kick to the head while the referee was otherwise occupied, allowing E to finish the job with a Big Ending.

Far be it from anyone to question the Battle Royal prowess of The Social Outcasts — Curtis Axel has still yet to be eliminated from the 2015 Royal Rumble Match, after all. But Andre the Giant Memorial Battle Royal competitors Heathy Baby, Bo Dallas, The Ax Man and The Radical Mongoose officially received a giant-sized challenge when Big Show declared himself for the Battle Royal. The Outcasts both interrupted the giant's announcement and surprisingly held their own against The World's Largest Athlete, but the honeymoon didn't last long as Kane showed up moments later and took all five Superstars out. What's that phrase about business picking up?

In 2013, Chris Jericho found himself on the wrong end of a tremendous WrestleMania upset against Fandango. But 2016 Chris Jericho would not be caught so easily unawares, despite AJ Styles’ attempt to repay The Ayatollah of Rock ’n’ Rolla's own distraction from earlier in the night by chanting “Y-2-Jackass!” atop the ramp. Styles’ appearance almost led to an exact repeat of the rollup that defeated Jericho at WrestleMania 29, but Jericho managed to land a Codebreaker to win. He was less interested in mixing it up with The Phenomenal One again, though Styles happily had a compromise ready: another match between the two world-traveled warriors at WrestleMania. Maybe Jericho can be surprised in 2016 after all.

“KO-Mania” just got manic. What seemed like a foolproof attempt by Kevin Owens to rid himself of his would-be challengers at WrestleMania went south in a hurry when The Prizefighter subbed Zack Ryder, Sin Cara and Stardust into the already announced No. 1 Contender's Match that was presumed to involve Sami Zayn, Dolph Ziggler and The Miz. Hey, he asked for a Triple Threat. He never specified who would be in the match.

Unfortunately, Owens’ plans went south in a hurry when Zayn, Ziggler and Miz came to the ring to confront the Intercontinental Champion, leading to brawl between everybody involved. That strategy ended up working out for them better than they could have ever hoped: While Stephanie McMahon was willing to humor Owens’ machinations earlier in the night, she had less patience for his failure to follow through, and as a result, “KO-Mania” was officially christened with an Intercontinental Title Ladder Match pitting KO against Zayn, Ziggler, Miz, Ryder, Sin Cara and Stardust.

WWE World Heavyweight Champion Triple H was conspicuous by his absence all night on Raw, and if what Roman Reigns did to The game in the brief moments he did show his face was any indication, The King of Kings was wise to keep his distance. All the champion did was pull into the arena with his limo to pick up Stephanie McMahon and leave, but Reigns was lying in wait.

The Big Dog not only barred The Game's vehicle from exit, but he forcibly removed Triple H from the backseat and beat him about the arena parking lot. Only some quick thinking from a visibly shaken King of Kings allowed him to make his escape, but Reigns should consider this a win nonetheless: It's not every day that The Cerebral Assassin finds himself outgunned.

While Natalya's own fate for WrestleMania remains undetermined — her, Paige, Alicia Fox and Brie Bella's challenge to Lana and Team B.A.D. remains unanswered as of yet — The Queen of Harts wasn't about to allow herself to be overlooked as The Show of Shows approaches. The former Divas Champion had to contend with Charlotte on Raw in a non-title rematch of their grueling battle of wills at WWE Roadblock, and Natalya proved for the third time that she is every inch the equal of the reigning Divas Champion. With her No. 1 contenders Sasha Banks and Becky Lynch at ringside, however, the champion proved her mettle by battling out of the Sharpshooter to hit Natural Selection. But the question lingers: If Charlotte can be tested this much by one elite Diva, how can she hope to survive two?

Those damn Dudleys have come home. And R-Truth, bless his heart, is screwed. Not only did Bubba Ray Dudley ride the rabid enthusiasm of the Philadelphia crowd to beat the former U.S. Champion down, but Truth's weeks of miscommunication with Goldust also meant he didn't even have a partner to help even out the interference of D-Von Dudley at ringside.

All of which is to say, Bubba got the win, and he got it emphatically with a big boot. Goldust attempted to make the save after the bell, but he, too, was dispatched. It took the arrival of The Usos to finally dispel The Dudley Boyz, though D-Von narrowly escaped being put through a table by the Dudleys’ WrestleMania opponents.

It's safe to say Mr. McMahon's plan to play The Undertaker against Shane McMahon hasn't gone quite as planned. Granted, The Phenom seems all too eager to eviscerate the prodigal son. That said, he also seems just as likely to tear The Chairman himself apart for presuming to use him as a puppet.

So, Mr. McMahon returned to Raw one week after narrowly dodging a chokeslam to add some extra incentive to The Last Outlaw's mission: Should he fail to defeated Shane-O-Mac inside Hell in a Cell, this coming WrestleMania would be The Undertaker's final WrestleMania.

Braun Strowman should thank Sister Abigail or whatever specter he worships that Dean Ambrose decided to use a chair and not Terry Funk's chainsaw to make a statement against the biggest Wyatt of them all after a grueling battle in Raw's main event. That Ambrose lasted long enough into his bout with Strowman to even bring a foreign object into the equation had to be a source of concern for ringside scout Paul Heyman, whose client Brock Lesnar will battle The Lunatic Fringe at WrestleMania in a No Holds Barred Street Fight. But what really left Heyman speechless (shocking in and of itself) was that Ambrose left The Black Sheep on his back, courtesy of a superhuman Dirty Deeds onto said chair. So can Ambrose do the same to Lesnar? As Terry Funk said (among other things) ask me no questions and I'll tell you no lies.

Mr. McMahon put The Undertaker’s legacy on the line at WrestleMania 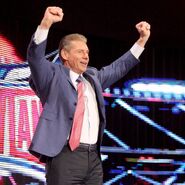 Retrieved from "https://prowrestling.fandom.com/wiki/March_21,_2016_Monday_Night_RAW_results?oldid=1560087"
Community content is available under CC-BY-SA unless otherwise noted.