The March 21, 2011 Edition of RAW is a Professional wrestling television show of the WWE's RAW brand, which took place on March 21, 2011 at CONSOL Energy Center in Pittsburgh, Pennsylvania. The attandance was 16,102.

Two weeks before the most consequential match of his career, Triple H invited his WrestleMania opponent, The Undertaker, to show up on Raw the following Monday. As he mentioned the need to get something off his chest, he was interrupted by Ted DiBiase. The hapless Superstar told Triple H that one way of putting his wayward career back on track would be to “take out” The Cerebral Assassin.

Easier said than done. After trading a few blows with DiBiase, The Game convincingly overpowered him. Perhaps sending a message to the man with the WrestleMania streak, Triple H ploughed The “Unfortunate Son” through the announce table with a Pedigree.

Sheamus continues to roll in clover. After his surprising title victory last week, the new U.S. Champion maintained momentum with a victory over Evan Bourne this week in a non-title match.

After the bout, former U.S. Champion Daniel Bryan challenged The Celtic Warrior to a title rematch at WrestleMania by invoking his rematch clause. Afterward, the Irishman leveled Bryan on the spot.

Divas Champion Eve may have faced conceited Diva Maryse, but her real anger emerged after their match. The lovely Latina proved she's worthy of wearing the butterfly when she defeated her French-Canadian foe. She then had to deal with more cowardly company. Safely inside a protective, plastic announce booth, Michael Cole once again belittled the Divas’ efforts. As a result, Eve berated the Raw announcer and slapped him across the face. For his part, Cole dismissed her and continued his tirade from the safety of his crybaby cube.

If there were a list of “People You Do Not Want to Anger,” Big Show and Kane would surely hover at the top. Unfortunately for The Corre, they're learning that a bit too late. When WWE Tag Team Champions Justin Gabriel & Heath Slater prevailed over Santino Marella & Vladimir Kozlov, their Corre brethren joined in the beatdown. Their actions prompted The World's Largest Athlete and The Big Red Monster, who were ambushed by The Corre on SmackDown, to enter the fray and destroy every Corre member in sight.

Having suffered a ferocious attack the week prior at the hands of WWE Champion The Miz, John Cena told the WWE Universe, via satellite, that he had opted to stay home to recover. When asked if he still underestimates his WrestleMania opponent, The Cenation Commander-in-Chief insisted he did not, and that his focus is squarely on Miz and not on the appearance of Dwayne “The Rock” Johnson on next week's Raw.

Like a rat scurrying into his hole at the first sign of danger, Michael Cole has perfected the spineless retreat. After indefensibly attacking the name of Jerry “The King” Lawler’s father, the Raw announcer scampered off into his protective, plastic announcer's booth. From inside the crybaby cube, Cole watched his trainer, Jack Swagger, attack Lawler. Certain that Lawler was incapacitated, Cole emerged from his hole and snapped on a vicious ankle lock.

Sparks flew when two of WWE's most electrifying Superstars clashed. A high energy battle between John Morrison and Dolph Ziggler ensued in the run up to their Six-Person Tag Team Match at WrestleMania, which will pit Morrison, Trish Stratus & Jersey Shore's Snooki against Ziggler, Layla & Michelle McCool. Rather than finish the bout, however, the match ended in a no contest when Stratus struck Lay-Cool. As a result, a 4-on-2 Handicap Intergender Tag Team Match was arranged by the anonymous Raw GM pitting Morrison & Stratus against Ziggler, Vickie Guerrero & Lay-Cool.

Despite trying her best not to get involved in the 4-on-2 Handicap Intergender Tag Team Match, Vickie Guerrero actually secured the win for her team. With a great deal of help from her teammates, boyfriend Dolph Ziggler & Lay-Cool, the callous cougar pinned John Morrison as his partner, Trish Stratus, looked on helplessly.

There are some lines you just don't cross – unless, of course, you're CM Punk. As his WrestleMania opponent, Randy Orton, faced off with Rey Mysterio in a WrestleMania 22 rematch, The Second City Savior had unholy intentions. Just when it appeared The Viper was verging on victory, Punk appeared on the TitanTron standing outside Orton's private bus and intimating that he was preparing to confront Orton's wife inside.

WWE's Apex Predator fled the ring and bolted for his bus outside, resulting in a loss by count-out. When he arrived, Orton found his wife terrified but safe. Punk then ambushed his WrestleMania foe, leaving him crumpled on the asphalt.

While WWE Champion The Miz was busy rewriting history, John Cena told the WWE Universe, he would be busy making it. He did not disappoint.

After The Miz was introduced by his new “Vice President of Corporate Communications,” Alex Riley, he went to great lengths to boast about his title reign. So self-absorbed became The Cleveland Screamer, in fact, that he unveiled a new WWE Championship with the title's “W” permanently affixed in an upside down “M” position.

As Miz basked in his own self-grandeur, Cena chimed in on the TitanTron. He informed the man who had attacked him for weeks in a row that he'd been watching, he just hadn't said where. Although The Cleveland Screamer was under the impression The Cenation Commander-in-Chief was at home, he was actually in the arena – and zeroing in fast.

The Awesome One and his lackey were confronted headlong by Cena, and the three crashed into the ring. At one point, Riley helped free his boss, who quickly bolted from the ring. As the WWE Champion looked back, his “VP of Corporate Communications” suffered an especially merciless thumping from The Cenation Commander-in-Chief.

Triple H invited The Undertaker to next Raw 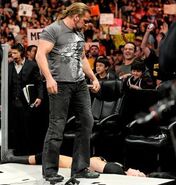 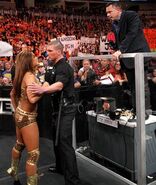 Retrieved from "https://prowrestling.fandom.com/wiki/March_21,_2011_Monday_Night_RAW_results?oldid=1560085"
Community content is available under CC-BY-SA unless otherwise noted.