The March 17, 2016 Edition of Smackdown is a Professional wrestling television show of the WWE's Smackdown brand, which was taped on March 15, 2016 at the U.S. Bank Arena in Cincinnati, Ohio.

Roman Reigns kicked off Thursday's hottest show amid chants of “Roman” from the WWE Universe as he wasted no time with his entrance, entering the arena via the SmackDown stage, rather than through the WWE Universe. The Big Dog recounted how he brought the “big fight” to WWE World Heavyweight Champion Triple H Monday, when he delivered an absolutely brutal attack that left The Game with six staples in his head.

The black-clad Superstar's message to his WrestleMania 32 opponent was short and to the point. The determined Reigns said he will bring a beating to The Cerebral Assassin on Sunday, April 3, and take The King of Kings’ WWE World Heavyweight Title. Believe that!

SmackDown's battle of Ohio natives was hard-fought on both sides, with both Dolph Ziggler and The Miz looking to reign supreme in front of their home state crowd. But in the end, The Showoff walked away victorious after superkicking Miz's “moneymaker” for the pinfall.

Dean Ambrose offered a glimpse into his Cincinnati upbringing and explained why the streets he grew up on prepared him well for his WrestleMania 32's No Holds Barred Street Fight against Brock Lesnar.

Amid a SmackDown slugfest, Bubba Ray Dudley used his brother D-Von's ringside distraction — and the brief appearance from a table underneath the ring — to help him defeated Goldust in a head-to-head showdown. Following the contest, Bubba and D-Von proceeded to inflict a post-match attack on The Bizarre One.

Interrupting the ambush, R-Truth rushed the ring to try and help the man he hopes to call his “Golden Truth” tag team partner. Despite thwarting the rapping Superstar, The Dudleys would eventually be sent scurrying by the arrival of their WrestleMania 32 opponents, The Usos.

Divas Champion Charlotte seemed prepared to apologize to her WrestleMania 32 challengers for her recent actions while trying to get nostalgic with the competitors she once called her fellow “Horsewomen.” Instead, the second-generation Flair used the “face to face to face” meeting to further antagonize her former friends by apologizing to her father by sullying the name “Horsewomen” with the inclusion of Banks and Lynch

Despite Sasha Banks and Becky Lynch's brief sidebar argument over which one was more deserving of their title match at The Showcase of Immortals, the onetime tag team partners turned their shoving match into a cohesive attack on the titleholder, sending her from the ring and into the arms of The Nature Boy who helped her escape her WrestleMania challengers.

The New Day's upcoming WrestleMania 32 showdown against The League of Nations has not put a damper on the group's fun-loving antics as they compared their foreign foes to hot garbage in yet another wildly entertaining in-ring address.

The fun was quickly brought to a halt, however, as The League arrived for King Barrett's subsequent match against Kofi Kingston to exploit their 4-on-3 advantage. Amid the in-ring action, tempers flared outside the ropes after Rusev interfered with a vicious kick to Kingston, prompting a ringside brawl.

Back in the ring, despite the British Brawler summoning help from his allies, Xavier Woods and Big E answered by pulling Alberto Del Rio and The Bulgarian Brute from the ring apron. This allowed their New Day partner to send Sheamus from the squared circle with a kick to the midsection before rolling up his opponent and grabbing a handful of tights to score the victory.

While The Social Outcasts announced they would be competing in the 3rd Annual Andre the Giant Memorial Battle Royal, their WrestleMania 32 plans quickly turned to group bickering. Luckily for the WWE Universe, Dean Ambrose arrived with a Kendo stick in hand, quickly dispatching the Outcasts.

The Cincinnati native then addressed the rumor that Brock Lesnar would be at SmackDown next week by letting his WrestleMania 32 opponent know he will be waiting for him inside the ring if and when he shows up. Will The Beast Incarnate step up to the plate and confront The Lunatic Fringe on Thursday's hottest show next week?

Just as AJ Styles seemed primed to deliver another Phenomenal Forearm to Intercontinental Champion Kevin Owens amid their hard-hitting main event, Chris Jericho's music hit and the charismatic Superstar slowly made his way down to the ring. The arrival of The Ayatollah of Rock ’n’ Rolla distracted The Phenomenal One long enough for WWE's prizefighter to hit a running knee on Styles en route to his Pop-up Powerbomb for the win.

Following the contest, Jericho hit Styles with a Codebreaker before mocking the WWE Universe by sarcastically chanting “AJ Styles” above his fallen rival. 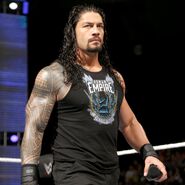 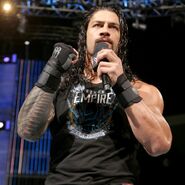 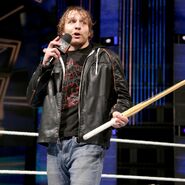 Retrieved from "https://prowrestling.fandom.com/wiki/March_17,_2016_Smackdown_results?oldid=1559974"
Community content is available under CC-BY-SA unless otherwise noted.