Tyler Reks had a lot to prove tonight. Once the most feared competitor on “WWE Superstars,” The Dreadlocked Demolition Man recently suffered three crushing losses to the powerful Chris Masters. With his reputation as an indestructible force beginning to fade, Reks had to show the locker-room that he's still as destructive as ever. And he did just that at the expense of JTG. Although agile and talented, the Brooklyn Superstar was outgunned tonight against his bigger, more powerful opponent. The tormented Superstar smashed JTG before putting him away with a brutal Burning Hammer.

Ever since their former ally, Tamina, jumped ship to side with Santino Marella, The Usos have had it out for the Italian Superstar and his tag team partner, Vladimir Kozlov. But as much as they’d like to take out the former WWE Tag Team Champions, Jimmy & Jey have failed to stop their rivals. The tag specialists continued to struggle tonight as they lost to Santino & Kozlov yet again. Displaying the same fighting spirit that earned him the nickname The Italian Stallion, Marella battled the twins almost singlehandedly before scoring the victory with his dreaded Cobra strike.

It was a good night to be a fan of the Divas as eight of Raw's sexiest women squared off in an epic tag match. Leading a contingent of Monday night's most vicious females, Nikki & Brie Bella continued to display a mean streak that has shocked the WWE Universe. With help from Melina, the sisters focused their attack on Natalya, brutalizing the former Divas Champion to the point that she was ready to quit. But the Hart Dungeon-trained Diva persevered and made the tag to Eve who scored with a big moonsault to give her team the win. 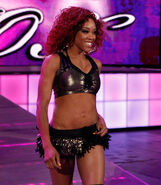 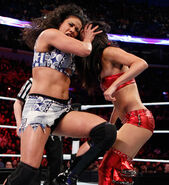 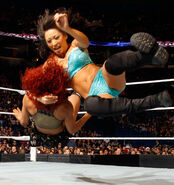 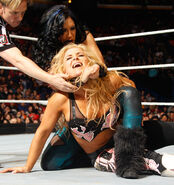 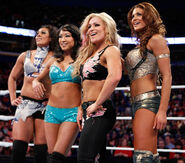 Retrieved from "https://prowrestling.fandom.com/wiki/March_17,_2011_Superstars_results?oldid=1559971"
Community content is available under CC-BY-SA unless otherwise noted.