March 23, 2016
The March 16, 2016 Edition of NXT is a Professional wrestling television show of the WWE, which took place at the Full Sail University in Winter Park, Florida on January 27, 2016.

With NXT TakeOver: Dallas just over two weeks away, NXT General Manager William Regal began revealing more of the card taking place on Friday, April 1, two days before WrestleMania 32. NXT Women's Champion Bayley found out who she will be defending her title against, while Sami Zayn got a huge surprise from Regal. Plus, in the main event, two of NXT's top teams clashed with an NXT Tag Team Championship opportunity hanging in the balance.

One week removed from coming up short in a grueling 2-out-of-3 Falls No. 1 Contender's Match against Samoa Joe, Sami Zayn remained upbeat, stating that his goal is still to be the first two-time NXT Champion. He went on to talk about how excited he was for NXT TakeOver: Dallas, despite not being on the card himself.

That was, until NXT General Manager William Regal arrived. Regal praised Zayn for the hard work he's put in for the NXT Universe, proclaiming that he deserved to face one of the best in the world at TakeOver. Regal left the official announcement of the match to Zayn's surprise opponent: Shinsuke Nakamura! The King of Strong Style's message to Zayn was simple: “See you in Dallas, when Shinsuke Nakamura takes over!” Zayn was stunned at first, but a smile quickly crossed his face as he realized the dream match that lies ahead of him on April 1.

After spending some time on the high seas with his good friend and New England Patriots tight end Rob Gronkowski, Mojo Rawley was back on land, ready to join forces with Zack Ryder in tag team action. The Hype Bros were fired up as the bell rang for their battle against Angelo Dawkins & Kenneth Crawford. Rawley & Ryder's rivals could not counter the raw energy of The Hype Bros, who picked up a dominant victory after hitting Crawford with the Hype-Ryder.

Emma was supremely confident as she made her way from the locker room to the ring, stopping to tell her opponent, Deonna Purrazzo, that the Emmalution can't be stopped. The independent competitor stepped right up to Emma when the bell rang, but quickly paid for it, as The Australian Diva backed her into the corner and pummeled her. Emma was ruthless and relentless in her attack, giving Deonna no time to recover before earning the win by submission with the Emma Lock.

Tommaso Ciampa was all business as he marched to the ring for battle this week on NXT. He wasted no time getting right into battle, clocking Jesse Sorensen with a dropkick in the corner before pulling his kneepad down and driving his bare knee into Sorensen's skull. Sorensen nearly mounted a comeback after connecting with a dropkick of his own, but Ciampa staggered him with a knee in the corner before forcing Sorensen to submit with his devastating armbar.

After their vicious attack on Bayley & Carmella last month, Eva Marie & Nia Jax finally had to get in the ring with the NXT Women's Champion and Asuka, the woman who put an end to their blindside beatdown. The powerful Nia quickly took control of the bout before tagging Eva Marie into the battle. The “Total Divas” star quickly lost control of the bout and found herself in the ring with Asuka. Eva tried to stun The Empress of Tomorrow with a forearm, but that only angered Asuka, who walloped Eva with a flurry of strikes.

Despite feeling Asuka's fury first-hand, Eva continued to poke the bear, drawing Asuka back into the ring from the apron. Bayley took advantage of the distraction and had Eva defeated. When Nia came into the ring to break it up, the NXT Women's Champion rolled out of the way, letting Nia crush her partner with a leg drop. There was nowhere to go for Eva Marie, who fell victim to a kick from Asuka and a Bayley-to-Belly to give her opponents the victory.

Bayley and Asuka's victory celebration was cut short by Regal, who announced that there is a new No. 1 Contender to Bayley's championship: Asuka! The Empress of Tomorrow immediately turned to the NXT Women's Champion and flashed the devilish smile that has spelt doom for so many of her rivals. Will Bayley meet the same fate at TakeOver: Dallas?

NXT Tag Team Champions The Revival were keeping a close eye on this battle to determine their next challengers. Simon Gotch struggled in the early moments of the match, quickly falling victim to the mat wizardry of Chad Gable. American Alpha seemed to be on fire, but The Vaudevillains quickly isolated Gable and sought to wear down the Olympian in their half of the ring.

Gable sent Gotch crashing neck-first into the ropes, giving him the opening to tag in Jason Jordan, who dashed into the ring and tossed both Vaudevillains around with a series of huge suplexes. Gotch prevented American Alpha from hitting English with Grand Amplitude, ensuring the bout would go on. Jordan neutralized Gotch at ringside with a suplex onto the arena floor. That left English alone against American Alpha, who kept him off-balance with blind tags, setting him up for Grand Amplitude to win the match and earn the right to challenge The Revival at NXT TakeOver: Dallas! 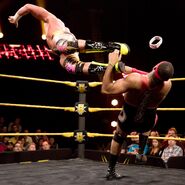 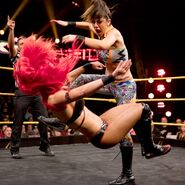 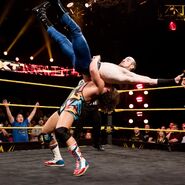 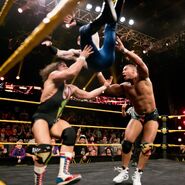