The March 14, 2005 Edition of RAW is a Professional wrestling television show of the WWE's RAW brand, which took place on March 14, 2005 at the Gwinnett Center in Atlanta, Georgia.

Triple H had the antidote for his “Pick Your Poison” Match against Chris Benoit, and next week “The Game” would get to make a match of his own.

On the one-year anniversary of “The Crippler” making Triple H tap to the Crossface at WrestleMania XX, the two squared off again — thanks to the decision of Batista. This time, the result was very different. Triple H beat Benoit for the first-time in nearly 5 years, hitting the Pedigree after an undetected low blow. The Game fought for his survival with only 20 days until his WrestleMania World Heavyweight Championship defense against the “Animal” Batista. Triple H suffered through a total of nine German suplexes and the Crippler Crossface before ultimately getting a pivotal victory in Atlanta.

Triple H reappeared later during Batista's bout against Gene Snitsky — a match orchestrated by Evolution's Ric Flair. And when Batista hit the spinebuster and set up the Batista Bomb, “The Nature Boy” got involved — taking Batista's legs out with a chop block. The Animal powered out of a three-on-one attack and chased his adversaries from the ring, but Evolution and Snitsky returned with steel chairs. When things began to look bleak for Batista, Kane charged the ring in hopes of getting his hands on hated rival Snitsky. The Monster and the Animal cleared the ring and were left facing only each other. That's when The Cerebral Assassin declared his choice for Batista's “Pick Your Poison” Match next week: Kane.

The Big Red Monster also had unfinished business with Christian and Tyson Tomko after being attacked with a ladder one week ago. This week, it was Kane's turn — despite two-on-one odds against him. The Big Red Monster first finished Tomko with a chokeslam, then bloodied the “Problem Solver” with a ladder shot of his own. Christian simply retreated up the ring apron, saving his energy for the six-way “Money in the Bank” Ladder Match at WrestleMania 21 on April 3.

Meanwhile, Edge's brutal tactics meant that his scheduled match against Shelton Benjamin almost had to be cancelled. Edge viciously assaulted Benjamin before the bell, smashing him against the RAW stage and ramming him into the ring steps. Referee Mike Chioda was reluctant to start the match under those circumstances, but Shelton assured him he could go.

What followed was an inspiring comeback featuring Shelton's high-flying attack. But the tide turned again when Benjamin missed his intended target with a dragon whip, instead incapacitating the referee. A spear soon followed, but there was no official to make the count. An irate Edge went beneath the ring and retrieved a ladder, but Chris Jericho evened even the odds by catapulting the ladder back up into Edge's jaw. Edge stumbled backwards and walked right into a T-Bone Suplex, which was enough to keep him down for the three-count.

Another legend was “killed” on Monday night, as Randy Orton dropped Georgia native Jake “The Snake” Roberts with an RKO. As someone who faced the 12-0 Undertaker at WrestleMania, Roberts was on RAW to suggest that Orton should think twice before making the same mistake. When Orton wasn't receptive, Jake leveled Orton with his signature short-armed clothesline and set up his patented DDT. But “The Legend Killer” reversed the finisher into one of his own, adding another name to his list of victims only days before his contract signing on SmackDown!

In another throwback moment, The Rockers reunited for a night and defeated La Resistance. Shawn Michaels didn't like the idea of Marty Jannetty's return to WWE coming on SmackDown! against Kurt Angle, so he invited his former tag partner to first participate in a RAW match. The charismatic duo conjured many of the tandem moves that made them so dangerous and beloved in their hay day — including duel cross-body blocks to their opponents on the outside. Jannetty finished the match in triumphant fashion by bringing back the Rocker Dropper, which KO’d Sylvain Grenier.

Also, Christy continued her WrestleMania training with help from Lita and Tajiri, while Trish sent her own message with an assault on RAW interviewer Maria. 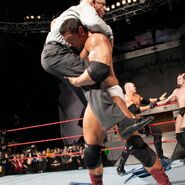 Retrieved from "https://prowrestling.fandom.com/wiki/March_14,_2005_Monday_Night_RAW_results?oldid=1626623"
Community content is available under CC-BY-SA unless otherwise noted.