March 20, 2014
The March 13, 2014 Edition of NXT is a Professional wrestling television show of the WWE, which took place at the Full Sail University in Winter Park, Florida on February 28, 2014.

On this week's edition of WWE NXT, Paige met the challenge of Sasha Banks and The Ascension showed why they are NXT's most dominant duo. Xavier Woods set out for retribution against Alexander Rusev, while Bo Dallas tuned up for his upcoming NXT Championship rematch against Adrian Neville.

The Boss of The BFFs tried to slow down the dominant NXT Women's Champion, but her best efforts weren't enough to put down Paige on this night. The intense “Anti-Diva” unleashed a flurry of elbows and clotheslines on Banks, leaving The Boss open for the devastating Scorpion Cross Lock. Though Banks tapped out, The BFFs weren't done with Paige. Charlotte jumped the titleholder after the bell, attacking Paige until WWE Diva Natalya rushed to the ring to even the odds and clear the ring!

Konnor & Viktor showed why they have held the NXT Tag Team Titles for so long with a dominant win over Travis Tyler & Cal Bishop. Tyler never had a chance against the precision moves of Viktor and the brute force of Konnor, while Bishop fared no better. Tyler was forcefully brought back into the match by Konnor, who whipped him into a vicious guillotine knee strike from Viktor. The Ascension put an end to the beatdown, destroying Tyler with The Fall of Man.

The massive Mason Ryan was in action on this week's WWE NXT, taking on Wesley Blake. The “real cowboy” tried to match power with The Colossus of Cardiff, but his holds were no match for Ryan's pure strength. Blake focused his attack on the shoulder of Ryan after sending him crashing into the ring post, but the Welshman endured the pain, summoning his strength to fight back and claim victory with a huge Cobra Clutch slam.

Xavier Woods was all business as he prepared for battle against the man who attacked him and Tyler Breeze at NXT ArRIVAL, Alexander Rusev. He was interrupted by Breeze, who surprisingly asked Woods to step down so he could tangle with the beast himself.

It was all a ruse, though, as Prince Pretty jumped Xavier while Rusev stalked to the ring. Woods stood up and said he could fight, but was no match for Rusev in his weakened state. The Bulgarian Brute picked him apart and forced Woods to tap out to the Accolade.

The wily Dallas staggered the New Yorker with a series of vicious elbows to the side of the head. Though Big Cass fought valiantly, Dallas picked up the win with a double-arm DDT, showing that he's more than ready for his NXT Championship rematch against Adrian Neville in two weeks. 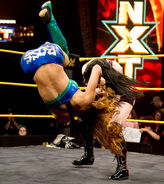 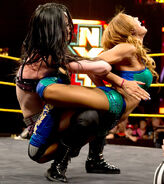