March 18, 2014
The March 11, 2014 Edition of Main Event is a Professional wrestling television show of the WWE, it was shown live on the WWE Network at the Verizon Arena in North Little Rock, Arkansas on March 11, 2014.

Los Matadores and Rybaxel are two tag teams in the hunt for the WWE Tag Team Championships. Their collision on WWE Main Event on WWE Network matched the power of Ryback and the technical prowess of Curtis Axel against the speed and agility of Diego and Fernando. Though both Axel and Ryback will face each other in the 30-Man Andre The Giant Memorial Battle Royal at WrestleMania 30, their teamwork on WWE Main Event was on display against the uncanny chemistry of their masked opponents.

The momentum of the battle wavered back and forth, but it was ultimately the teamwork of Diego and Fernando - with an assist from El Torito - that allowed them to pick up a victory against Rybaxel.

Natalya and AJ Lee – the longest-reigning Divas Champion in WWE history – renewed their rivalry and battle for the Divas Title on WWE Main Event. With "Total Divas" season two premiering this Sunday on E!, the daughter of Jim "The Anvil" Neidhart was poised to silence AJ and claim the butterfly title.

Relying on her skills that were forged in the legendary Hart Family Dungeon, Natalya focused on using her technical abilities to her advantage. Conversely, the Divas Champion continued her mind games and was well aware that her bodyguard – Tamina – could swoop in at a moment's notice.

Both Divas left everything inside the squared circle, even countering each other's respective submission maneuvers. As AJ was locked in The Sharpshooter, Tamina offered an assist. As a result, Natalya was distracted, allowing the Divas Champion to deliver a crushing knee to the face, followed by her patented Black Widow to secure the victory.

Showing a united front, Roman Reigns and Seth Rollins joined their fellow Hound of Justice as he faced off against Mark Henry to defend the United States Championship. The World's Strongest Man leaned on his size and impressive power to counteract not only his opponent, but the other members of The Shield. However, Ambrose – one of the most unorthodox competitors in WWE – used that to his advantage.

Employing a brutal strategy, the United States Champion targeted his 400-pound opponent's knees, keeping Mark Henry grounded. The World's Strongest Man displayed the resilience that has contributed to his storied career. However, the methodical tactics used by Ambrose – and some assistance from The Shield – allowed the United States Champion to overcome a late rally by Henry and retain the title. 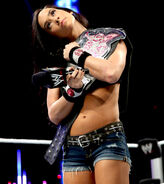 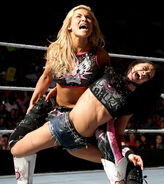