The March 11, 2011 Edition of Smackdown is a Professional wrestling television show of the WWE's Smackdown brand, which took place on March 8, 2011 at the Toyota Center in Houston, Texas.

When Edge attempted to fend off Alberto Del Rio and his protégé, Brodus Clay, Christian came to the champion's aid. Then, when the former tag team partners ended up taking quite a beating, SmackDown General Manager Theodore Long announced the four would square off in the night's main event.

After his refusal to join The Corre, Kane paid a painful price when the group of renegades brutally attacked him, resulting in an immediate disqualification in his bout with Wade Barrett. Before total destruction, Big Show rushed to the ring to drive off the vicious attackers.

Despite being banned from ringside by SmackDown General Manager Teddy Long, Justin Gabriel and Ezekiel Jackson couldn't hold back from joining the fray, launching a brutal four-on-one assault against Kane. After watching the assault from outside the ropes, Big Show eventually got back into the ring to help out his partner. The World's Largest Athlete first blasted Jackson with a steel chair across the back. Then, as Barrett brandished the chair, Show drove the cold steel back into his face with a massive right punch. As The Corre scattered, Show slammed Kane across the back with the steel chair – perhaps payback for Kane's chair shot in their one-on-one match last week.

Bitter and self-conscious about his injured face, Cody Rhodes unloaded on JTG, finishing him off quickly with a brutal Cross Rhode

John Cena came to SmackDown to boldly proclaim that WWE Champion The Miz made the biggest mistake of his career when he blindsided Cena and hit him with the People's Elbow on Raw. When Michael Cole antagonized Cena about the night, all hell broke lose. In the end, Cole's WrestleMania trainer, Jack Swagger, was met with the full force of an Attitude Adjustment.

Despite a formidable offense from NXT season three winner Kaitlyn, Layla took care of business with a Lay-out neckbreaker. Afterward, Layla held Kaitlyn in the corner, allowing Michelle McCool to connect with a vicious kick from behind.

Saying emotion would not play a role in his match with The Undertaker at WrestleMania, Triple H eagerly accepted the proposed No Holds Barred Match and confidently predicted victory over The Phenom.

As Edge and Alberto Del Rio's WrestleMania collision draws near, the two battled in tag team action. Reunited for the first time in more than a decade, Edge and Christian used their veteran skills to achieve victory. After Captain Charisma stunned Clay with a Tornado DDT, The Ultimate Opportunist followed up with a hard-hitting flying elbow. 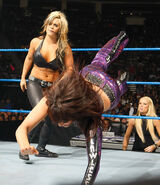 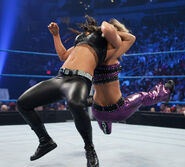 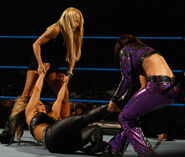 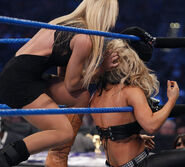 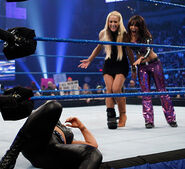 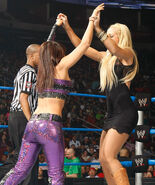 Retrieved from "https://prowrestling.fandom.com/wiki/March_11,_2011_Smackdown_results?oldid=1559904"
Community content is available under CC-BY-SA unless otherwise noted.