The March 10, 2014 Edition of RAW is a Professional wrestling television show of the WWE's RAW brand, which took place on March 10, 2014 at the FedExForum in Memphis, Tennessee.

You know something, brother? When Hulk Hogan comes to Raw, the WWE Universe stands at attention, and for good reason: The Immortal One's much-ballyhooed WrestleMania announcement concerned the inaugural, 30-Superstar Andre the Giant Memorial Battle Royal, which will unfold at The Show of Shows in a few weeks’ time. John Cena was so moved he even entered his name into the melee, and right on cue, The Wyatt Family chose that moment to crash the party.

While Bray Wyatt sat in his rocking chair and condemned the two Superstars’ misguided “pride,” the tension built to a fever pitch until the 14-time World Champion reached his limit with The Eater of Worlds’ endless sermons and challenged Wyatt to a match at WrestleMania 30. He didn't get a direct response from Bray; he did, however get a formidable foe in the form of Erick Rowan, who Wyatt sent in the ring to face Cena for their one-on-one match.

When Bray Wyatt does face John Cena at WrestleMania, it's safe to say he's now seen what he's up against. “The Man of 1,000 Truths” got an up-close-and-personal look at the Cenation leader in action against his acolyte Erick Rowan on Raw, and even though the bout ended with Cena victorious, the Family walked out of Raw with a better grasp of their foe than they had ever gotten before.

Even with Hulk Hogan playing hype man for Cena, the 14-time World Champion found himself stumbling uphill against the hulking Rowan, who targeted Cena's recently injured knee to devastating effect. A rib-crushing bear hug left the Cenation leader sucking wind, yet he was able to score an out-of-nowhere win with a sudden roll-up to the big man. Wyatt immediately offered his Family a chance at redemption, sending both his hulks into the ring when Hulk himself came to Cena's side, though The Eater of Worlds’ command to retreat meant that bout, as well as any others, would have to wait ... at least until April 6.

They say there's nowhere to go from the top but down, yet The Usos don't seem to be losing momentum anytime soon. The freshly minted WWE Tag Team Champions maintained both altitude and attitude (check those DX-mocking green and pink trunks for The New Age Outlaws’ benefit at commentary) to their way through their first Raw as incumbent titleholders, leaving “Rybaxel” to eat their dust in a fast-paced tag match on Raw.

The champions were admittedly fighting from behind for the first few moments of the tag team match after Curtis Axel nearly gave Jimmy Uso whiplash by slamming him headfirst into the ropes. A fresh Jey Uso repaid the favor by bouncing Axel's head off the top rope and pounding him with a running stinkface before superkicking Ryback out of the ring. Jimmy tagged in while Jey pounced on “The Big Guy” from the outside, sealing the match with a Superfly Splash (complete with midair crotch-chop) to the former Intercontinental Champion.

Will it come crashing down for The Real Americans? Certainly Jack Swagger was left hurting inside by the end of his latest bout with Big E, thanks both to the power of the Intercontinental Champion and the notable indifference of Swagger's brother-in-arms, Cesaro. Even though Swagger had initially asked Cesaro to stay out of the match, the former World Heavyweight Champion found himself in dire straits when Big E (who threw his hat into the Andre the Giant Memorial Battle Royal) flattened him with a belly-to-belly suplex.

Swagger reclaimed momentum by taking out E's knee, but his frustration over Cesaro's refusal to interfere took his eyes off the ball and the champion pounced with a roll-up pin. A fuming Swagger seemed ready to throw down with Cesaro at ringside until Zeb Colter – for the second week – stepped in and forced his men into a handshake and the “pound-for-pound strongest man in WWE” certainly took advantage of the opportunity, squeezing Swagger's hand until Colter forced him to let go.

Paul Heyman talked a big game last week, but The Undertaker casts a bigger shadow than the mad scientist's mouth could ever muster up. The Phenom, returning to Raw for the first time since accepting Brock Lesnar's open challenge for WrestleMania 30, vowed to keep his storied Streak alive and make it two-for-two against Paul Heyman Guys at The Show of Shows.

Or he would have, had Heyman not interrupted The Last Outlaw before he even got going, begging The Undertaker to abandon his contest with Lesnar and ensure his Streak's survival with The Anomaly. The Phenom wasn't exactly shaking in his boots, demanding Heyman bring Lesnar a dark warning of what's to come: “If he shows up in New Orleans, he will rest in peace.”

If anyone on the WWE roster was in need of a morale-boosting victory, it was The Shield. And The Hounds of Justice, despite recent tensions, came through in the clutch by defeating The Rhodes Brothers on Raw to earn some belated payback for “The Brotherhood’s” taking of their Tag Team Titles back in the fall. With Dean Ambrose prowling the sidelines, Seth Rollins & Roman Reigns got off to a strong start before the brothers pounced with a criss-crossing cross body-somersault plancha combo to the two Hounds outside the ring.

Reigns roared his way back to the advantage, beating the paint off Goldust's face and initiating the Shield's patented “numbers game” plan alongside Rollins to power their way to a near-permanent advantage. A last-ditch effort from a fresh Cody Rhodes gave The Brotherhood life, but Rollins got the last word by reversing the Disaster Kick into a corner powerbomb and, finally, a stomp that drove the prince of the Rhodes family face-first into the canvas.

Well that's one way to celebrate a season premiere: The return of “Total Divas” may just be the second-biggest moment of The Bella Twins’ week after knocking off the Divas Champion AJ Lee & Tamina Snuka on Raw. The Bellas were at a disadvantage where power was concerned thanks to Tamina, who jacked Brie Bella's jaw with a monstrous superkick before leaving her to AJ.

The champion had Brie dead to rights until she reached Nikki for a tag, and from then on it was all Bellas, all day. Brie neutralized Tamina on the outside and Nikki successfully thwarted AJ's Black Widow, spinning her into the “Nikki Rack Attack” for the three-count and posing with the title for emphasis. Fellow "Total Diva" Natalya, who tapped AJ out on SmackDown to earned a Divas Title Match on WWE Main Event, didn't seem so willing to concede the title race, though, climbing the apron and going face-to-face with Nikki when all was said and done.

The time for talk is over:Daniel Bryan didn't just invite the “YES!” Movement to voice their opinions, he brought them into the ring and, in so doing, finally got what he wanted from the WWE brass. Bryan didn't have much use for Stephanie McMahon's “apology” earlier in the evening, calling the denizens of the “YES!” Movement itself into the ring until Triple H gave him his WrestleMania match.

Despite The Authority's demand that Bryan and his people vacate the ring, the movement's continued defiance forced Stephanie McMahon into a rage and Triple H, left with no other choice, finally gave Daniel Bryan what he wanted: He said "yes."

Oh, and thanks to a last-second power play, Bryan even got a cherry on top: If he should beat Triple H, the main event of WrestleMania will become a Triple Threat Match for the WWE World Heavyweight Championship.

It is a fact well known that underestimating Christian often leads to disaster. Still, Captain Charisma ran against a red-headed wall for the second week in a row when he battled Sheamus in a WWE App-determined Memphis Street Fight on Raw. Despite the brawling Irishman's aptitude in an anything-goes environment, Christian certainly held his own ... that is, after a rough start where Sheamus mashed his face into the steel steps.

Despite that iffy beginning, Christian rallied by playing a country tune on the Irishman with a Kendo stick that left his back tattooed with welts, but Sheamus changed that tune fast with some swings of his own from the stick and his “Ten Beats of the Bodhrán” chest clubs. Even though a frog splash atop a chair-covered Sheamus nearly won Christian the match, he found himself beat in multiple senses of the word thanks to a Brogue Kick through a would-be weaponized bass drum. Hardly an easy victory for The Celtic Warrior, but as another King once said, “That’s all right, mama.”

Beards were respected, giants were feared, and Triple H was put on notice when his champion Randy Orton and his protégé Batista came up short against two of The Authority's most persistent enemies, Daniel Bryan & Big Show, in the main-event of Raw. Bryan & Show presented a unified front from the word go, with Bryan knocking Orton into the barricade via suicide dive.

Orton rallied and tagged in Batista, who made mincemeat of his potential fellow No. 1 contender alongside The Apex Predator until Bryan reached Big Show for a grueling tag. The Viper and The Animal continued to work in sync to bring Show down, though not enough for a successful Batista Bomb. The battle – as it always seems to – came down to Bryan and Orton, and the submission expert did not disappoint his legions, dodging a Batista spear that then took out Orton and surviving a mad brawl to hit the running knee and once again leave the Champion of Champions belly-up under the lights. The win left the “YES!” Movement screaming in joy, as well it should. Now imagine what happens if he does it again. 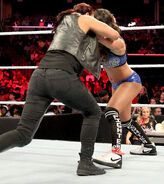 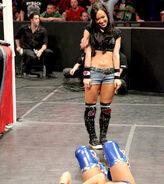 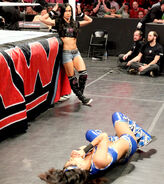 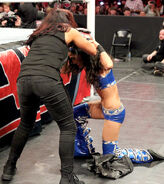 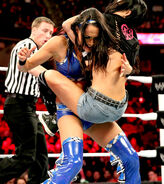 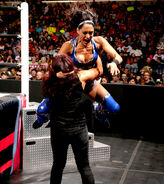 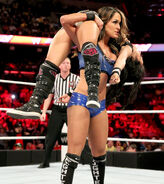 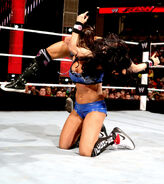 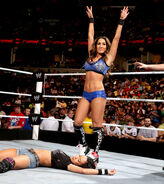 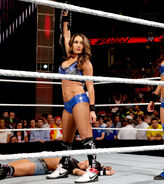 Retrieved from "https://prowrestling.fandom.com/wiki/March_10,_2014_Monday_Night_RAW_results?oldid=1559896"
Community content is available under CC-BY-SA unless otherwise noted.