March 8, 2017
The March 1, 2017 Edition of NXT is a Professional wrestling television show of the WWE, which took place at the Full Sail University in Winter Park, Florida on February 1, 2017.

“The Patrick Clark Experience” arrived to NXT and it didn't disappoint.

The flamboyant Clark certainly proved he can put on a show for the crowd, but he also backed up his bravado with a smash-mouth attack.

It was by no means an easy contest for Clark, who started off slow against Sean Maluta. The former Cruiserweight Classic competitor had Clark on his heels early on, thanks to his versatile offense. Clark soon regained his footing, however, unleashing an array of emphatic strikes.

The one-time WWE Tough Enough participant eventually picked up the victory after hitting an impressive Famouser on Maluta.

Asuka's historic NXT Women's Champion reign remains intact. But, The Empress of Tomorrow was taken to the limit by Peyton Royce.

If nothing else, the cunning Royce showed that she clearly belongs in the title picture after giving Asuka a run for her money in a captivating championship contest.

Despite making a costly mistake by taunting the titleholder, The Venus Fly Trap managed to weather Asuka's fiery comeback and nearly pick up the pinfall on multiple occasions. In the end, Asuka won via submission after forcing her challenger to tap out to the Asuka Lock.

After the match, Billie Kay entered the ring and began assaulting Asuka, with Royce soon joining in. Unfortunately for Royce and Kay, Ember Moon arrived to make the save and dispatch the devious duo.

Even though Moon saved Asuka from further damage, there was no feel-good moment afterward, as both Superstars stared each other down in a tense, yet extremely enticing moment.

Johnny Gargano & Tommaso Ciampa began the contest laser-focused as they jumped out of the gate swinging. The former titleholders’ momentum wouldn't last long, though, as Akam & Rezar soon neutralized Ciampa and began to relentlessly brutalize the bearded bruiser.

Amazingly, Ciampa withstood the onslaught to tag in Gargano, who proceeded to electrify the NXT Universe with an array of moves on the monstrous Authors of Pain.

After a furious back-and-forth, #DIY planted the 300-plus-pound Rezar with a double powerbomb from the top rope. Rezar still somehow managed to kick out, leading to the Authors setting up their Super Collider maneuver.

Gargano & Ciampa remained one step ahead, reversing the devastating double-team move into dueling submission holds. Just when it seemed like #DIY were about to regain their NXT Tag Team Titles, The Revival interfered, causing a disqualification.

After Scott Dawson & Dash Wilder sent #DIY from the ring, they engaged in a back-and-forth with The Authors of Pain, which eventually ended with Akam suffering the Shatter Machine. 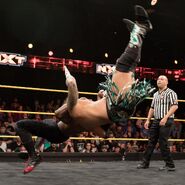 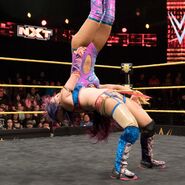 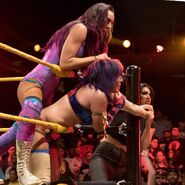 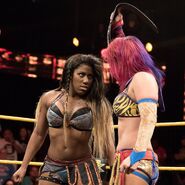 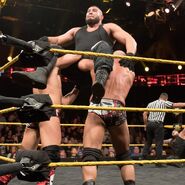