The Mandible Claw is a wrestling maneuver which, when applied correctly against an individual, can cause intense, legitimate pain. Popularized in the 1990s by American wrestler Mick Foley, the move is based heavily on "The Mandibular Nerve Pinch," finishing hold to 1960s osteopathic physician-turned-wrestler Sam Sheppard.

The hold is applied when the aggressor places his middle and ring fingers into the opponent's mouth, sliding them under the tongue and jabbing into the soft tissue found at the bottom of the mouth. The thumb and/or palm of the same hand is placed under the jaw, and pressure is applied downward by the middle and ring fingers while the thumb/palm forces the jaw upwards. Foley later claimed on a television interview that the painful sensation in the nerves under the tongue is so strong that it inhibits vision and, when applied long enough, can force the opponent to black-out.

With such intimate contact with the inside of the opponent's mouth, it would not be unlikely that this could end up being a somewhat unhygienic move to perform. As a result, Mick Foley (under the moniker of the psychopathic Mankind) initially wore a two-fingered glove/sheath over his middle and ring fingers. Later in Mankind's career, he switched out the glove for a sock puppet named "Mr. Socko," making the Mandible Claw one of the most popular moves in the business.

When famed wrestling manager Jim Cornette first taught the move to Mick Foley, Foley suggested it to two bosses to ask their opinions on the potential finisher. The first, Bill Watts, famed wrestling promoter and former Vice President of World Championship Wrestling, heard Foley's idea of the move and immediately shot it down with the question, "Why don't I just bite your goddamn fingers off?"

When Foley later suggested the idea to World Wrestling Entertainment owner Vince McMahon, he was met with a similar question, but persuaded McMahon that it could be glossed over by a claim that it was a "nerve hold" that immobilized the recipient's jaw. Throughout Foley's career as WWE wrestler Mankind, the same question had also been an issue with many wrestling fans. Although technically as the fingers are under ones tongue, it would force the victim to bite through their own tongue to bite off the fingers of the person applying the hold.

The Mandible Claw is something of an odd submission-style maneuver, mainly because it is one of only a handful of moves that can legitimately be applied to one's self. Foley's character Mankind once demonstrated this ability when, in a match against Ken Shamrock, Foley applied the hold against himself. The deranged Mankind did this in order to save face by causing himself to black-out instead of submitting to Shamrock's submission hold, the Ankle Lock. 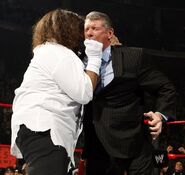 A photo of Dr. Sam Sheppard who was the inspiration for this move.
Add a photo to this gallery

Retrieved from "https://prowrestling.fandom.com/wiki/Mandible_claw?oldid=957462"
Community content is available under CC-BY-SA unless otherwise noted.