June 15, 2010
The June 8, 2010 Edition of NXT is a Professional wrestling television show of the WWE, which took place at the St. Pete Times Forum in Tampa, Florida. This was the first episode of season two.

The WWE Universe was introduced to the eight new NXT Rookies and their WWE Pros on the season two premiere of WWE NXT. Tensions arose quickly, though, when the eight NXT Rookies entered the ring and their competitive sides came out.

In season two of WWE NXT, only 50 percent of the evaluation lies with the WWE Pros. The WWE Universe's votes will account for the other 50 percent, as YOU will help choose WWE's next breakout star.

Also, season two will only be 12 weeks long. In just three weeks, the results of the first WWE Pros’ Poll will be revealed, and the WWE Universe will vote in the first WWE.com Poll. Then, in just six weeks, the first NXT Rookie will be eliminated! Who will go on to be crowned the winner of season two of WWE NXT and earn a pay-per-view match against the champion of his choice?

Two NXT Rookies paired with their WWE Pros to kick off season two's competition. NXT Rookie and former NFL player Titus O'Neil showed off his athleticism in the ring when paired with his WWE Pro, Zack Ryder, while NXT Rookie and former NBA player Eli Cottonwood revealed his intense side and earned his first win when paired with his WWE Pro, John Morrison. The Monday Night Delight welcomed O’Neil to WWE NXT with Starship Pain, securing his tag team victory. Morrison told the WWE Universe that he thought Cottonwood held his own in his first WWE NXT match, but WWE Pro The Miz wasn't impressed: “I’m not entertained. You failed.” Cottonwood starts WWE NXT with a 1-0 record, while O’Neil's record begins at 0-1.

WWE Pro MVP paired with fellow Miami resident, NXT Rookie “Showtime” Percy Watson,” to take on WWE Pro Cody Rhodes and third-generation NXT Rookie Husky Harris. While the near-300-pounder Harris impressed with his athleticism in the ring, Rhodes seemed frustrated with his NXT Rookie. MVP and Watson’s chemistry was natural, and the flamboyant “Showtime” earned a win after pinning Harris. Afterward, MVP declared that “‘Showtime’ Percy Watson is ready for prime time.” Watson begins the season with a 1-0 record, while Harris starts at 0-1.

The WWE Pros, the NXT Rookies and the WWE Universe took another look at the carnage caused the previous night by the season one NXT Rookies. The first WWE NXT graduating class made a surprise attack on Raw, destroying anything and everything in their path, including WWE Champion John Cena, WWE employees, announcers and the entire ring.

WWE NXT host Matt Striker offered the season two NXT Rookies a chance to offer their thoughts on the attack. Kaval called the season one NXT Rookies’ actions “unbelievable,” but he said that's the way to make a statement in WWE. Lucky Cannon said they acted “cowardly,” but Eli Cottonwood believed Cena deserved the shocking assault.

Then, Striker officially “welcomed” the season two NXT Rookies to WWE. Just as WWE Pro and “Co-Women’s Champion” Layla looked like she'd offer Kaval a hug, she instead slapped her NXT Rookie, prompting a brawl. The WWE Pros tossed their protégés from the ring, as WWE Pro Mark Henry delivered a devastating World's Strongest Slam to NXT Rookie Titus O'Neil. The WWE Pros sent a very loud and clear message – if any NXT Rookies wish to follow in the footsteps of the season one graduates, it will NOT happen in the season two WWE NXT ring under their watch.

Season two of WWE NXT began with a bang Tuesday night. After the shocking events on Monday Night Raw, this season's WWE Pros made it clear they won't tolerate any misbehavior by the new NXT Rookies.

The WWE Pros and NXT Rookies brawl at the end of the season two premiere. 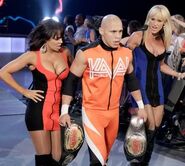 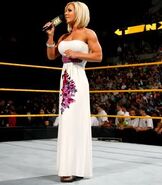 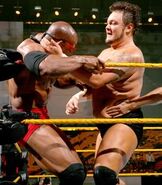