The June 7, 2010 Edition of RAW is a Professional wrestling television show of the WWE's RAW brand, which took place on June 7, 2010 at the American Airlines Center in Miami, Florida. This was a three-hour long Viewer's Choice edition, featuring performers from both RAW and SmackDown. The guest hosts were Bradley Cooper, Quinton Jackson and Sharlto Copley, from the movie the A-Team. Matt Striker announced the results of the Viewer's Choice polls, and Gene Okerlund, Ted DiBiase and Virgil, I.R.S., Rowdy Roddy Piper and Dusty Rhodes also appeared.

Edge vs Orton's stipulation was chosen at the start of the show, when SmackDown general manager Teddy Long and Raw general manager Bret Hart presented the three options to the live audience in Miami.

The mystery man who faced Drew McIntyre was revealed after the vote as Matt Hardy. At the time was Hardy was suspended from Friday Night SmackDown; Teddy Long allowed this match to continue as Matt was not suspended from RAW.

The John Cena vs CM Punk match was interrupted by NXT Season 1 winner Wade Barrett (who had also appeared earlier in the show) and the rest of the NXT Season 1 rookies, who attacked Cena, Punk, Luke Gallows, Matt Striker, Jerry Lawler, Justin Roberts and many other WWE personnel. This was the first appearance of the group later known as the Nexus. As a result of his actions NXT Season 1 rookie Daniel Bryan was legitimately fired by the WWE. 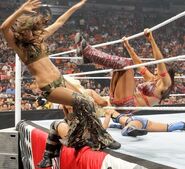 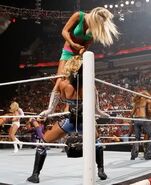 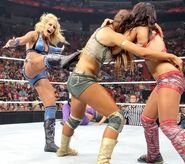 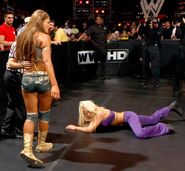 Retrieved from "https://prowrestling.fandom.com/wiki/June_7,_2010_Monday_Night_RAW_results?oldid=1251650"
Community content is available under CC-BY-SA unless otherwise noted.