The June 5, 2017 Edition of RAW is a Professional wrestling television show of the WWE's RAW brand, which took place on June 5, 2017 at the Mohegan Sun Arena at Casey Plaza in Wilkes-Barre, Pennsylvania.

Bray Wyatt made it very clear in the lead-up to WWE Extreme Rules that his dream was to “slay The Beast” and claim the Universal Title. Alas, Samoa Joe now has that opportunity, and The Reaper of Souls has turned his attention toward the “guilty” Superstars who denied him, beginning with Roman Reigns.

The Big Dog, of course, wasn't entirely appreciative of Wyatt running him down in his own yard, so he socked The Eater of Worlds in the mouth and seized early control of the match. Wyatt gradually wore his opponent down to an even level as the battle raged on, planting Reigns with a uranage and rallying from a Drive-By to connect with a clothesline that nearly knocked Reigns out cold. But Reigns saved his best burst for last, escaping Wyatt's attempt at Sister Abigail to land a Superman Punch and a Spear for the win.

You can't really blame Dean Ambrose for being a little raw (so to speak) about what went down at WWE Extreme Rules.

After Ambrose somehow managed to adhere to the stipulation that he could lose the Intercontinental Title to The Miz via disqualification at WWE Extreme Rules, a confrontation with the referee allowed The A-Lister to pin Dean the old-fashioned way, all of which is to say that The Lunatic Fringe wasn't really in the mood for Elias Samson's singing insults on Raw.

Ambrose ambushed Samson mid-ballad and threw him into the crowd, only stopping to demand his title rematch with The A-Lister. But Miz, having plenty of experience in avoiding people who want to beat him up, came prepared: The new Intercontinental Champion was ensconced in the safety of the backstage area, from which he revealed that Ambrose would not be getting a rematch, and Miz would instead kick off his “Intercontinental Championship Comeback Tour” with a celebration later in the evening.

And then, finally, Samson sprang back up and laid out Ambrose. Adding insult to injury (injuries?), Kurt Angle gave Ambrose the night off when the deposed former champion went hunting for The A-Lister backstage.

Brock Lesnar's first Universal Title defense is set for the WWE Great Balls of Fire pay-per-view, and goodness, gracious, it is going to be a good one, especially since Samoa Joe began his No. 1 contendership in earnest by crossing what has typically been Lesnar's red line over the last few years: He assaulted Paul Heyman.

The Advocate initially came to the ring during Joe's address to tell the No. 1 contender that, despite Joe being a "worst-case scenario" for Lesnar, The Beast Incarnate would be victorious in their title match. Heyman delivered a sportsmanlike handshake and that appeared to be that ... at least for a few seconds.

Joe replied by cornering Heyman and narrating, moment-by-moment, what was going to happen in the forthcoming Coquina Clutch, ultimately demanding that Heyman describe the feeling of the maneuver to Lesnar, whose absence "disappointed" the No. 1 contender.

Lo and behold, Joe made good on his word and put Heyman to sleep, and while the crowd chanted "We want Brock!" as The Advocate slipped into unconsciousness, Joe grabbed hold of the mic and delivered an ominous reply: "So do I." Luckily for Joe, The Conqueror himself will be at Raw next week, but he might regret getting what he wished

The Hardy Boyz’ handpicked proviso of a Steel Cage Match proved to be their undoing at WWE Extreme Rules, as Cesaro & Sheamus capitalized on the free-for-all stipulation to claim the Raw Tag Team Championship for the second time. And the team that claims they don't just set, but embody the proverbial bar got their reign off to a formidable start by defeating Heath Slater & Rhyno, who never really got out of the blocks thanks to some clever misdirection by the champs early in the contest.

The One-Man Band managed to land a big kick on Sheamus, but The Swiss Cyborg took out Rhyno at ringside and The Celtic Warrior blasted Slater with the Brogue Kick for the win. The champions then took hold of the microphones and took a few verbal jabs at the Hardys, proclaiming that they were probably the only two people happy Matt & Jeff came back, because otherwise they wouldn't have been able to defeat them for the titles.

After weeks of carrying out Neville's bidding and helping him keep Austin Aries at bay, TJP is ready to claim what The King of the Cruiserweights promised: A WWE Cruiserweight Title Match. Or at least he says he is.

Truth be told, Neville played his right-hand man Monday night, promising TJP he would attempt to get the match sanctioned during The Fil-Am Flash's bout against Mustafa Ali. Once TJP had defeated Ali, Neville resurfaced. The King of the Cruiserweights seemed to imply that he was unable to secure TJP's promised match, but when The Duke of Dab demanded they speak to Kurt Angle together, Neville struck from behind and laid out TJP, revealing when he was done that TJP would get his opportunity on tomorrow's 205 Live, exclusively on WWE Network.

Turnabout, as they say, is fair play, so you can't really fault Kalisto for securing his second consecutive win over The Titus Brand by doing to Titus O’Neil exactly what The Big Deal did to him a few weeks back.

Namely, roll up his formidable challenger and secure the fateful pinfall with a handful of tights, while O’Neil's beleaguered protégé Apollo Crews looked on at ringside. As for Akira Tozawa, who O’Neil approached to join the Titus Brand earlier in the day, it's safe to say The Big Deal will have to do much better in terms of his sales pitch the next time around.

In an ideal world for The Miz, he would have begun his Intercontinental Championship “Comeback Tour” with champagne, gifts and absolutely no interference of any kind from Dean Ambrose. He'll have to settle for two out of three.

The so-called kickoff ceremony did indeed have all the trappings Miz expected, but having seen Seth Rollins do this dance a few years back, the champion was understandably paranoid that Ambrose was lying in wait and thus, had his head on a swivel from the word jump, despite the fact The Lunatic Fringe had been ostensibly given the night off by Raw GM Kurt Angle.

Miz became steadily more unhinged as the ceremony progressed, beating up a dancing bear whom he thought was Ambrose in disguise and dropping two tremendous elbows on a giant gift box before Ambrose could, presumably, jump out and attack. That turned out to be a gift of a "timeless" grandfather clock from Maryse, and its destruction led to The Awesome One's lady love storming off in disgust.

He needn’t have looked so hard to find The Lunatic Fringe, though: With Kurt Angle distracted thanks to his own ongoing drama surrounding potentially-incriminating texts, Ambrose had snuck back into the building and hid himself in plain sight, filming Miz in the guise of a cameraman and waiting for the opportune moment to strike with Dirty Deeds. The Lunatic Fringe then took Miz's champagne for good measure.

The twisted tale of who attacked Enzo Amore took an interesting twist this week, as it was Big Cass who found himself laid out by a mystery attacker. This time, there was even a piece of evidence at the scene — a gold chain, which hadn't been seen since Muscles Marinara himself was jumped two weeks prior.

Enzo was slightly suspicious of the chain's reappearance, but he also had another problem to deal with, as WWE officials deemed Big Cass would be unable to compete in their scheduled match against Luke Gallows & Karl Anderson..

Luckily, Cass isn't the only seven-footer who likes to yell “S-A-W-F-T,” as Big Show answered the call to fill the void, spout the catchphrase and help defeat the “good brothers” come bell time.

Cass, however, seemed to find the timing of Show's reappearance to be quite suspect, though Enzo stopped his partner just short of accusing The World's Largest Athlete of being the mystery attacker. And all the while, Cass’ own No. 1 suspects, The Revival, roamed the hallways yet again, doing whatever “top guy things” demanded their attention.

A few weeks ago, Alexa Bliss recruited Nia Jax to her side with the promise of a future Raw Women's Title Match should she get past Bayley unscathed. Well, Alexa's still champ after WWE Extreme Rules, and on Raw it was time to pay the piper. Bliss retained her title thanks to a technicality and what may have been a canny bit of planning.

Seeking to replicate the strategy that joined her and Jax up in the first place, Bliss went to the Women's locker room seeking help — anyone's help — against Jax. With the exception of Sasha Banks, who dismissed Alexa outright, the ladies all said they’d rather just sit at ringside and watch Bliss get destroyed, which led the champ to run her entire division down throughout the night.

When Jax inevitably tossed Alexa to the outside during what was shaping up to be a one-sided win, Little Miss Bliss shoved Dana Brooke and Mickie James to instigate a brawl, handing herself a disqualification win and conveniently keeping the title around her waist.

Even more conveniently, Little Miss Bliss got out of Dodge right as Jax took out her frustrations on anything that moved, leaving Dana and Mickie in a heap while the champ made herself scarce.

If there was one lesson to be taken away from Raw, it's that Samoa Joe truly fears nothing, but maybe Seth Rollins should.

Even with the looming threat of Brock Lesnar “unleashing The Beast” next week in response to Joe's attack on Paul Heyman, the No. 1 contender to the Universal Title put on a clinic against Seth Rollins in the Raw main event following The Kingslayer's assertion he wasn't afraid of anyone either, be it Joe, Roman Reigns or the “false prophet and wannabe martyr” Bray Wyatt.

Rollins took the fight to Joe like a man with something to prove, but The Samoan Submission Machine was just a hair faster and a hair more on point than he was the last time these two met, deploying a counter for every move Rollins attempted.

When Rollins finally fought into the advantage and prepared to go up top, Wyatt's signature imagery played across the TitanTron, distracting The Architect long enough for Joe to lock in the Coquina Clutch and put Seth to sleep. Next week, The Beast arrives, and we find out who is truly heading into their worst-case scenario. 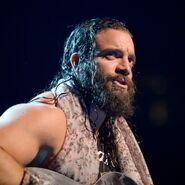 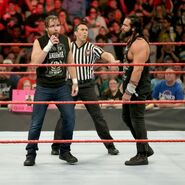 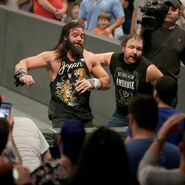 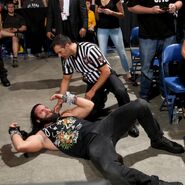 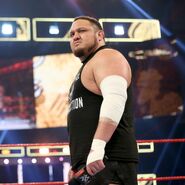 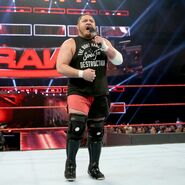 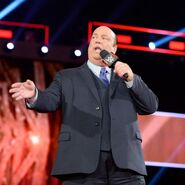 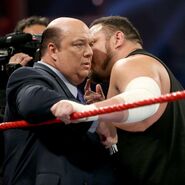 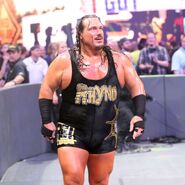 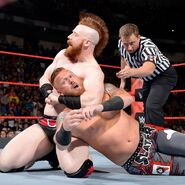 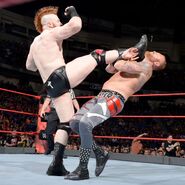 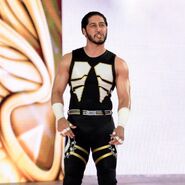 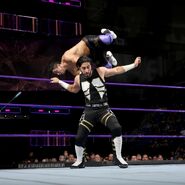 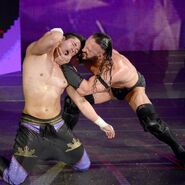 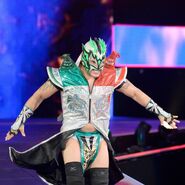 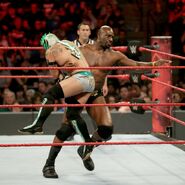 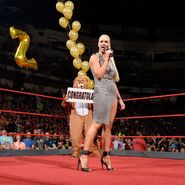 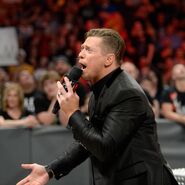 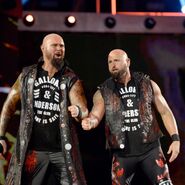 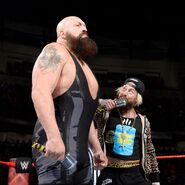 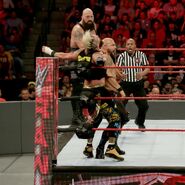 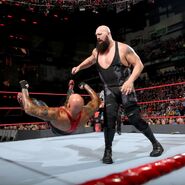 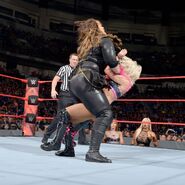 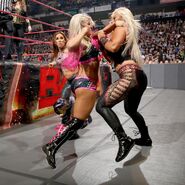 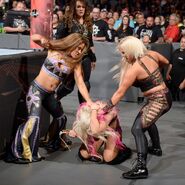 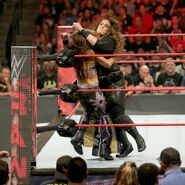 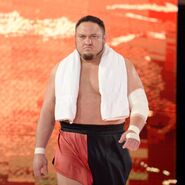 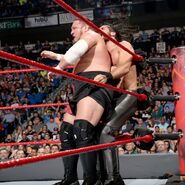 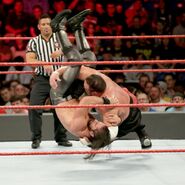 Retrieved from "https://prowrestling.fandom.com/wiki/June_5,_2017_Monday_Night_RAW_results?oldid=1559098"
Community content is available under CC-BY-SA unless otherwise noted.