The future of NXT began to take shape in the aftermath of Takeover. NXT Women's Champion Charlotte was nearly upset in her first bout after winning the title, thanks to the surprise return of a BFF. The tag team division heated up, thanks to an impressive performance by Jason Jordan & Tye Dillinger. The new No. 1 contender to the NXT Title, Tyler Breeze, premiered his new music video, while champion Adrian Neville was confronted by Tyson Kidd after his match against Justin Gabriel.

Though he was bulldozed at the hands of Rusev during NXT Takeover, Mojo Rawley refused to stay down. The energetic Superstar returned to the ring, as hyped as he's ever been, to square off with Aiden English. Though “The Artiste” took delight in singing of Rawley's shortcoming, there was little English could do to silence the hypeman once the bell rang. Mojo's unstoppable energy was too much for "The Artiste" to overcome, as Rawley steamrolled to victory with the Hyperdrive!

One week after claiming the NXT Women's Championship, Charlotte rekindled an old rivalry, taking on Bayley. The second-generation Diva unleashed her mean streak, but Bayley battled back and seemingly had the upper hand after taking out Sasha Banks. Charlotte was on the verge of victory when the third member of the BFFs, Summer Rae, made her long-awaited return to NXT!

The distraction nearly cost Charlotte the bout, but the NXT Women's Champion recovered and hit Bow Down to The Queen for the win! While Charlotte and Sasha seemed to be confused by Summer's return, they didn't have much time to think things over, as Summer attacked Bayley on the canvas. The rest of the BFFs joined in on the assault, until Divas Champion Paige and Emma evened the odds and rescued Bayley!

Jason Jordan & Tye Dillinger def. Phillip Gooljar & Stewart Cumberland: With NXT Tag Team Champions The Ascension begging for more competition, Jason Jordan & Tye Dillinger are out to prove they're worthy of a title opportunity. While Phillip Gooljar & Stewart Cumberland tried to put a damper on their opponents’ championship hopes, there was no stopping the athletic duo. In the heat of the battle, JJ nailed Gooljar with the Jordan Slam to pick up the victory for his team.

Fresh off winning the No. 1 contendership to the NXT Championship at Takeover, Tyler Breeze announced that he can cash in his title opportunity whenever he wants, but would make Adrian Neville play the waiting game. It was a special night for Breeze, as he presented the world premiere of the music video for “#MMMGorgeous,” the song he recorded to use as his entrance music. While the NXT Universe may not have been as into the tune as he was, Prince Pretty was moved to tears as his clip came to a close.

Never one to slow down, NXT Champion Adrian Neville hit the ring one week after his grueling title defense against Tyson Kidd at Takeover, facing another formidable highflyer in Justin Gabriel. Surprisingly, the two aerial experts started the match on the mat, showing off their grappling skills. Neville and Gabriel had each other scouted quite well, as they were able to stop one another from attempting to take flight, until Neville found the opening to land a somersault plancha off the apron. Though he suffered a gruesome eye injury, The Dare Wolf put up a valiant effort, but fell victim to Neville's Red Arrow, giving the champion the victory.

As Neville celebrated his win, he was confronted by Kidd. The last graduate of the Hart Dungeon apologized for his poor sportsmanship after their match at NXT Takeover, before asking for another NXT Championship opportunity. Neville accepted the challenge, setting the stage for what is sure to be an epic rematch! 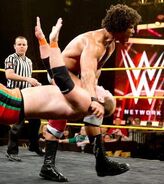 CJ Parker protesting in the audience 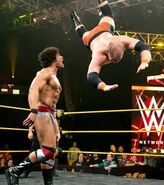