The June 3, 2019 Edition of RAW is a Professional wrestling television show of the WWE's RAW brand, which took place on June 3, 2019 at Frank Erwin Center in Austin, Texas.

The Six-Man Tag Team Match pitting Roman Reigns and The Usos against Drew McIntyre and The Revival was never going to end these respective rivalries — everyone is in too deep for their issues to end in anything short of decimation — but Raw's wild clash kicked things into a new gear all the same, thanks in no small part to the involvement of Shane McMahon.

“The Best in the World” made his presence known before the match even began, antagonizing Reigns from atop the ramp with the bold promise to hand The Big Dog his first-ever submission loss this Friday at WWE Super ShowDown. McMahon got involved in the match, too, diverting Reigns’ attention and setting him up for a bulldozing Claymore from Drew McIntyre, who finished off the match moments later with a second Claymore to one of The Usos. (The Revival ran interference on the outside.)

Shane didn't let the end of the match stop him, either, recruiting McIntyre and The Revival for a series of post-match indignities against The Big Dog, culminating in his own variation on the former Universal Champion's signature Spear. It was Shane's most definitive statement in this rivalry to date; whether he can make good on his momentum without three bullies at his side, however, is another matter entirely.

A few weeks ago, throwing The Lucha House Party in the ring with Lars Sullivan would have meant just more bodies for The Freak to stack. Incredibly, however, Kalisto, Lince Dorado & Gran Metalik seem to have cracked the code of how to use their numbers against the typically unstoppable big man, leading to a retaliatory attempt by Sullivan just four days before he faces the trio in a Handicap Match.

The Freak once again walked away disappointed: Despite a strong opening against the self-styled “Lucha Avengers,” he found his efforts snapped by rapid-fire attacks from the trio and a triple dropkick that sent him tumbling through the ropes. This is simply a preamble to Friday's scramble, but after the last two confrontations, this under-the-radar rivalry has become a matter of pride very fast. Vindication awaits, either for the scrappy underdogs who are on the cusp of slaying a giant, or the vengeful big man who let them have hope for far too long.

If contentment is the enemy of competition, consider Becky Two Belts better off gone. As Becky Lynch explained, reaching the mountaintop had the unintended side effect of plateauing the double-champ, which helped contribute to losing the SmackDown Women's Title at WWE Money in the Bank. Things were looking up for The Man on Raw, however, because her two rivals — Lacey Evans and Charlotte Flair — are now fighting each other, and because Lynch seems to have rediscovered a little bit of that old straight fire we all fell in love with.

Lynch didn't interfere in the mounting tensions between The Lady and The Queen, instead sitting back while the hostilities built to the point of an impromptu match between Evans and Flair. She made quite the show of her non-interference during the match, too, until The Queen had sufficiently tenderized her foe and Becky made her move, hauling Charlotte out of the ring — cue the disqualification win — and pummeling Evans with the Man-handle Slam. Consider the payback delivered, or at least begun, and Becky Lynch leaves Raw in the exact opposite of the way she arrived: Happy, for sure, but nowhere near content.

The short, tragic saga of Rey Mysterio as United States Champion came to an end — for now, at least — as The Ultimate Underdog, hamstrung by a shoulder injury, came to Raw and did what needed doing by relinquishing the title to Samoa Joe. Given that Joe's shoulders were never down for the pinfall that cost him the title, that development amounts to justice served for the once and now current champion. Rey, meanwhile, is forced to grit his teeth and do the right thing as he always has, thanks in no small part to an obstacle he couldn't quite overcome. Nonetheless, the facts are these: Joe is champion. Joe is happy. And given that he savaged Mysterio with a Coquina Clutch anyway once he got the title back, it's back to business as usual.

The arm-wrestling contest has its own strange, oddly hallowed place in the annals of sports-entertainment as a matter of pure bragging rights, so before Braun Strowman and Bobby Lashley beat each other all over WWE Super ShowDown, it was only fitting they faced off in one of the most rudimentary yet rewarding tests of strength. Unfortunately for Strowman, he seems to have forgotten that a rivalry doesn't always come down to who's the strongest.

Despite some mind games and taunts that riled up Strowman at the outset, Lashley found his All Mighty muscles were no match for the power of These Hands, as Strowman planted him after a couple of false starts. Strowman refused to let up, either, but the chest-beating came with consequences: Lashley threw a bag of chalk in The Monster Among Men's face, rendering Strowman blind and defenseless against a Running Powerslam of The All Mighty's own. Given the loss, you can consider Lashley humbled — given what happened after, you can also consider him motivated. Both would be true.

Nikki Cross has been tearing it up alongside Raw Women's Champion Becky Lynch the last couple of weeks as The Man's tag team partner, but Alexa Bliss re-inserted herself into The Twisted Sister's orbit on Raw, backing her up against Peyton Royce and inadvertently giving her an opening to defeat the IIconic — though Cross didn't seem to notice.

The inciting incident was Bliss sipping on a personalized coffee mug at ringside, which led Royce and Billie Kay to take their attention off Cross. Royce booted the cup out of The Goddess’ hand before The IIconics sent Bliss tumbling into the puddle, white jeans and all. Cross took advantage of the chaos to pin Royce with her twisting neckbreaker, but an infuriated Bliss got the last word, pouncing on Billie Kay in a moment of frenzy that made her new friend quite proud.

Seth Rollins was feeling pretty good when he walked into Raw — seemingly against all logic, as he was still facing the looming threat of a Brock Lesnar cash-in. The Beast made him regret that bravado by putting on quite the show of delaying the inevitable, most crucially during a confrontation with Baron Corbin — the man Rollins will unquestionably have to defend his Universal Title against Friday at WWE Super ShowDown. The Conqueror's final fake-out landed Rollins square in the path of an End of Days from The Lone Wolf, at which point Mr. Money in the Bank finally made his promised appearance.

He did not, however, make good on his promise to cash-in the contract, despite hysterical pleas from Paul Heyman to do so. Instead, Lesnar savaged Rollins with a pair of suplexes, an F-5 on the outside, and a series of raining blows from a steel chair. Heyman once again begged his client to cash in, though Lesnar refuted him with a single word: Friday. Given that Rollins was taken out of the arena on a stretcher as a result of the attack, it's safe to say that's as good of a time as any. And anyone who tries to force Lesnar to make a move before he's ready does so at their own risk.

Welcome to a Very Special Episode of “Firefly Fun House,” where Bray Wyatt extolled the virtues of exercise with a brand new friend, Huskus the Pig Boy. As Bray told the gluttonous porker, indulging his appetites won't get him anywhere in the world, and if he gets his act together, one day he'll be called a genius with the whole world in his hands. All he has to do is something called the “Muscle Man dance,” a funky boogie that turned the pig into a gym rat — much to the dismay of Abby the Witch and much to the delight of the horned, besuited devil who appeared in his doorway.

As far as Triple H is concerned, his match with Randy Orton this Friday at WWE Super ShowDown didn't need to be anything more than a battle between two multi-time World Champions with nothing to prove and no bad blood to speak of. Even after all they’d done to each other, The Game felt there was nothing either of them could say that could truly rile up the other. With that said, the COO felt the need to remind Orton that he wasn't just an empty suit, and he'd outlasted everyone who'd made the mistake of underestimating him. Orton was unwilling to keep things ceremonial, though, tossing out a single insult that was enough to get The King of Kings in his face and, perhaps, make things personal for this Friday. Just the way both of them like it.

... Best of three! After two straight weeks of show-stealers, barn-burners, you name it, Ricochet and Cesaro had their rubber match, and it was every bit as thrilling as the previous two bouts. That Ricochet got the win and the bragging rights was somewhat overshadowed, though, as the ongoing grudge dovetailed with the saga of the 24/7 Championship in unexpected fashion.

You see, R-Truth had been conspicuous by his absence all night, and a hunting party — led by an increasingly disheveled Drake Maverick and a solo cup-toting EC3 — spent the whole show trying to find him. Truth turned up under everyone's nose, literally: After Ricochet had defeated Cesaro in typically stupefying fashion, The Swiss Cyborg administered a retaliatory beating and went to retrieve a table from beneath the ring ... only to reveal Truth hiding on top of it.

A stupefied Cesaro found himself dropkicked by Ricochet before he could even contemplate making a move for the title, and then the chase began anew, with the usual suspects pouring out of the woodwork to try and pin the elusive champion. Thanks to an assist from Carmella, who superkicked Maverick right when the 205 Live GM had Truth to himself, the champion made his latest, narrowest escape yet, dashing through the WWE Universe. As Truth shows, it helps to have someone watching your back, especially when it's every man for himself.

With only one Raw to speak his mind on his first-ever bout with Goldberg, The Undertaker kept things short and sweet. Goldberg, he claimed, would be subjected to the same kind of otherworldly fury The Deadman has unleashed on all his rivals when the reaper comes calling, and the air would be thick with the souls of his vanquished foes. But despite all that, The Last Outlaw made very clear that he still expected the “unstoppable icon” version of Goldberg, rather than the benevolent family man of his final WWE run. Anything less would be met with “an inhumane amount of brutality.” As far as The Deadman is concerned, Goldberg is next, but he may rue the day he walked again if the former WCW Champion gives the legendary Superstar exactly what he asked for.

Drew McIntrye & The Revival vs. Roman Reigns & The Usos 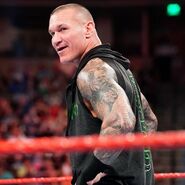 Retrieved from "https://prowrestling.fandom.com/wiki/June_3,_2019_Monday_Night_RAW_results?oldid=1591470"
Community content is available under CC-BY-SA unless otherwise noted.