The June 3, 2011 Edition of Smackdown is a Professional wrestling television show of the WWE's Smackdown brand, which took place on May 31, 2011 at the Wells Fargo Arena in Des Moines, Iowa.

One week after coming up short in a Triple Threat No. 1 Contender's Match, Christian triumphed over The World's Strongest Man Mark Henry with the Killswitch.

Addressing the WWE Universe after the match, Christian made it clear that he didn't blame the referee or anybody else for what happened to him one week ago. But, he did make it clear that he should be facing Randy Orton for the World Heavyweight Championship instead of Sheamus. When SmackDown General Manager Theodore Long emerged, Captain Charisma took a play from the GM's book, asking the WWE Universe if they would rather see The Viper face him or The Celtic Warrior – or even a Triple Threat Match between the three explosive Superstars. Although Long wouldn't oblige his appeals, he opted to make Christian the Special Guest Referee in the World Title main event.

Despite another valiant effort by the explosive Diva combination of A.J. and Kaitlyn – backed by third-generation Diva Natalya – Tamina snatched the victory for Alicia Fox and herself, hitting A.J. with the Samoan Drop.

One week after Daniel Bryan made him tap to the Lebell Lock, Cody Rhodes dismissed the idea that Bryan defeated him at all. As his bagmen handed out paper bags to the WWE Universe in the hopes that they might cover their faces, Rhodes cited that he left Byran flat on the canvas after a brutal post-match assault. He predicted that one day soon, his adversary – who “oozes ordinary” – will be watching him win the World Heavyweight Title from the crowd with a paper bag on his head.

In his debut SmackDown match, Jinder Mahal overcame Yoshi Tatsu with a brutal full nelson, suplex slam. After the bell, he instructed The Punjabi Warrior to crush his opponent with the excruciating Khali Vise Grip.

Barely escaping Ezekiel Jackson's submission backbreaker, Wade Barrett held onto the Intercontinental Title by getting counted-out of the match. When The Corre stormed into the ring for a post-match attack, the English Superstar pulled back, leaving Heath Slater and Justin Gabriel to feel the full wrath of “The Personification of Domination.”

In an intense battle, Daniel Bryan overcame Ted DiBiase with the Lebell Lock, grabbing his second victory in as many weeks. Immediately after the pin, however, the extremely bitter Cody Rhodes attacked Bryan. This inspired the international sensation Sin Cara to leap to the rescue, using his logic-defying arsenal to clear the squared circle of both Rhodes and DiBiase.

From the start of the World Heavyweight Championship Match between Randy Orton and Sheamus, it looked as if special guest referee Christian would call things right down the middle. However, in WWE, things can change just like that.

When Sheamus inadvertently ran into Captain Charisma and attempted to pin WWE's Apex Predator, Christian failed to finish the three-count – clutching his arm in apparent pain. But, after a frustrated Celtic Warrior shoved Christian, the temporary official blasted him with his supposed injured arm, paving the way for the reinvigorated Orton to hit the RKO and successfully defend his title.

Then, as the eight-time World Champion celebrated his triumph, Christian stunned the WWE Universe, smashing Orton with the World Title before shouting at his prey that “he can beat him.” 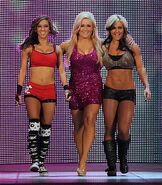 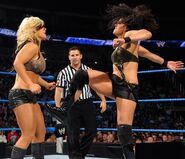 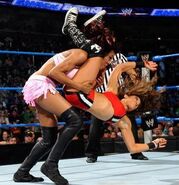 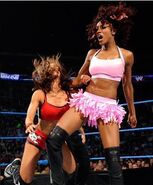 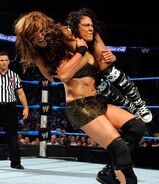 Retrieved from "https://prowrestling.fandom.com/wiki/June_3,_2011_Smackdown_results?oldid=1559078"
Community content is available under CC-BY-SA unless otherwise noted.