July 6, 2016
The June 29, 2016 Edition of NXT is a Professional wrestling television show of the WWE, which took place at the Full Sail University in Winter Park, Florida on June 9, 2016.

ORLANDO, Fla. — After a tense confrontation last week, Carmella and Alexa Bliss squared off in the ring this week, hoping to prove that they were worthy of challenging for the NXT Women's Championship. Though the feisty Bliss was extra-aggressive from the get-go, Carmella went hold-for-hold with Alexa, forcing the small but fierce competitor to regroup at ringside.

The Princess of Staten Island used Alexa's aggression against her to take control, but Carmella's angry rival eventually caught up with her and viciously slammed her arm into the canvas. Bliss targeted the limb, but could not put Carmella away. A frustrated Bliss argued with the referee, leaving her open to a hard left hand from The Princess of Staten Island. Carmella tried to capitalize on her distracted opponent, but Alexa's pure rage could not be overcome. Alexa slammed Carmella to the mat and connected with Twisted Bliss from the top rope to get the three-count and an important victory.

The incredible Andrade “Cien” Almas returned to action this week, taking on the unusual Noah Potjes. Despite Potjes’ attempts to pummel Almas into the canvas, “Cien” stayed on course, using his inimitable lucha libre skills to stay several steps ahead, eventually crushing Potjes in the corner with rushing double knees to get the win.

With The Revival looking for challengers, two of NXT's top teams squared off, as the energetic Hype Bros took on the red-hot duo of Johnny Gargano & Tommaso Ciampa. Johnny Wrestling had a little trouble dealing with the raw power of Mojo Rawley, which put him and Ciampa at an early disadvantage.

The Hype Bros looked to be in the driver's seat, especially after Rawley steamrolled over Gargano with a huge clothesline at ringside. However, Gargano showed incredible heart by weathering the storm and stunning Rawley with an enzuigiri. The Hype Bros recovered and nearly hit Ciampa with the Hype-Ryder, but Gargano yanked Rawley out of the ring and almost took his head off with a superkick. Chaos broke out among all four men, and when the dust settled, Ryder found himself sandwiched between Gargano's boot and Ciampa's knee. That spelled the end for The Hype Bros, as Gargano & Ciampa picked up their fourth straight victory.

Immediately after their victory, Gargano & Ciampa made it clear that they felt an NXT Tag Team Title match with The Revival was theirs for the taking. However, former champions American Alpha begged to differ. Jason Jordan & Chad Gable, who are owed a rematch against Dash & Dawson, said that the line for a title match starts with them.

The Revival disagreed with both teams, declaring that they dictate when they'll defend their titles. NXT General Manager William Regal quickly arrived, reminding Dash & Dawson that he runs the show. But while Regal agreed that Gargano & Ciampa are deserving of a title opportunity and will get one in the future, the score needed to be settled between The Revival and American Alpha first. That will happen next week on WWE Network, when the two square off for the NXT Tag Team Championship in a 2-out-of-3 Falls Match!

A disappointed Gargano & Ciampa shook Jordan & Gable's hands before leaving the ring. American Alpha was ready for their title showdown next week, but unfortunately, not for the blindside attack from The Authors of Pain. The monstrous duo demolished Jordan, Gable, Gargano and Ciampa handily while Paul Ellering watched the carnage unfold. Whoever walks out of next week's title match will certainly have to keep an eye out for the devastating Authors of Pain. 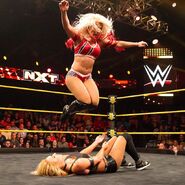 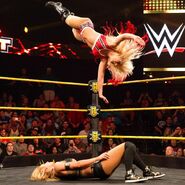 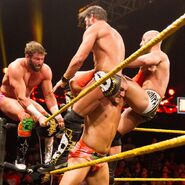 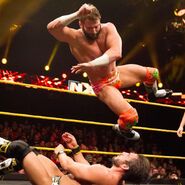