July 6, 2010
The June 29, 2010 Edition of NXT is a Professional wrestling television show of the WWE, which took place at the Mohegan Sun at Casey Plaza in Wilkes-Barre, Pennsylvania.

As the WWE Universe voted in the first live NXT Poll, the eight NXT Rookies competed in their first Challenge – The Keg Carry. Hoping to impress the WWE Pros and the WWE Universe one last time before the NXT Poll, each NXT Rookie had to pick up and carry a full keg around the ring and across the finish line, without the keg touching the ground.

Lucky Cannon started the Challenge, rounding the ring in 12.7 seconds. Luck was all this Rookie needed, as Husky Harris, Michael McGillicutty, Kaval and Titus O'Neil all were disqualified. With the impressive win, Cannon earned himself immunity from tonight's elimination.

In this season's second WWE Pro vs. NXT Rookie Match, MVP took on Husky Harris. With his energetic NXT Rookie, “Showtime” Percy Watson, in his corner, MVP dominated Harris, who confidently referred to himself as “an Army tank with a Ferrari engine” this week on WWE.com. But Harris’ rocky and oftentimes unsupportive relationship with his WWE Pro, “Dashing” Cody Rhodes, hasn't helped his fight on WWE NXT. Harris’ record fell to 0-2 with his loss to MVP. After the match, as MVP put out his hand as a sign of respect for the Rookie, Harris motioned to The Ballin' Superstar that he was "this close" to winning, and angrily left the ring with his WWE Pro.

In their last match before the WWE Pros voted in the first NXT Poll, six of the NXT Rookies met in a Six-Man Tag Team Match. Determined to finally impress the WWE Universe and the WWE Pros with a win, Kaval tapped into his vast arsenal of offense to earn a victory for himself and fellow NXT Rookies Lucky Cannon and Michael McGillicutty when he pinned Alex Riley, hitting the impressive Warrior's Way. After this Six-Man Tag Team Match, the participants’ records stand at: Kaval: 1-2, Cannon: 1-2, McGillicutty: 3-0, Alex Riley: 2-1, Eli Cottonwood: 2-1, Titus O’Neil: 0-3.

The WWE Universe and the WWE Pros votes were combined and the results have been tabulated for first NXT Poll. Kaval is ranked No. 1, while Titus O’Neil came in last, ranking at No. 8! With the ranking, O’Neil has been eliminated from the NXT competition.

O'Neil left the WWE Universe with some inspirational advice, "Make life what you can - take each and every opportunity you can to make it a win!"

With the first NXT Poll rankings in, the WWE Universe and the WWE Pros are one step closer to crowning the winner of WWE NXT. Which NXT Rookie will become WWE's next breakout star win a future championship match at a WWE pay-per-view?

Tonight on WWE NXT, one of the eight Rookies' road came to an end, as the night of the first Pros' Poll also signaled season two's first surprise elimination. 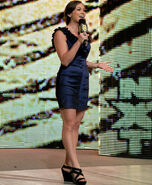 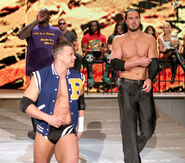 Kaval was ranked No. 1, while Titus O'Neil was the first Rookie eliminated from season two of NXT.