Whether it's his flamboyant antics or his stellar in-ring performance, The Velveteen Dream continues to give the NXT Universe reason to pay attention. Against Hong Kong wrestling pioneer HoHo Lun, the Dream exploited his obvious size and strength advantage, at one point downing Lun with a thunderous Jackhammer. His Randy Savage-esque elbow drop from the sky was the final dagger through the heart of Lun. After collecting the three-count, The Velveteen Dream fanned himself off and spot-checked his hair, reminding us all that winning matches isn't his only priority.

Bent on evening the score with Hideo Itami after Itami blasted him with multiple GTSes the last time they wrestled, Oney Lorcan charged out the gate, firing off a European uppercut. The opening salvo caught Itami's face in all the wrong ways, and blood began pouring out of his nose. The referee paused the bout and, after consulting with ringside medical personnel, called off the match — much to the disappointment of Itami, Lorcan and the entire NXT Universe.

The fight, however, was far from over.

Minutes later, Itami reemerged from the locker room. His nose flattened, twice as wide as before and stuffed with cotton, he waved on Lorcan to return to the ring.

Lorcan obliged, and the blistering action picked up where it left off. Itami struck first this time, landing a running big boot as soon as the bell rang. He battered Lorcan with knees and kicks, but the Boston brawler chopped and uppercut his way back. Itami's savvy eventually won out, as he suckered Lorcan in and attacked his knee, causing Lorcan to crumple to the mat shortly after. Lorcan refused to quit, even when the referee gave him the chance, but he still couldn't muster a defense against Itami's GTS. Unlike their previous battle, Itami stopped there, pinning Lorcan instead of continuing the onslaught.

Itami then invited Kassius Ohno to the ring, but before they could address their tumultuous friendship, Nikki Cross climbed onto the ropes and distracted them long enough for Killian Dain and Alexander Wolfe to pounce. After they laid waste to Itami and Ohno, Wolfe ended things on a most ominous note, revealing that SAnitY's “maestro,” Eric Young, is hard at work crafting a master plan for the chaotic crew.

NXT Women's Champion Asuka made history inside the yellow ropes yet again, this time defeating Nikki Cross to win NXT's first-ever Last Woman Standing Match. The stipulation — which, until now, had only been applied to matches featuring male Superstars — carries one brutal objective: To incapacitate your opponent to the point that they cannot stand before the referee counts to 10.

Liberated by lawlessness, the undefeated Empress of Tomorrow and her crazed challenger tore at each other at full speed. Asuka slammed a trash can over Cross’ upper body and unleashed a flurry of kicks with Cross still trapped inside, capping off the blitz with a missile dropkick. Cross staggered to her feet by the count of seven. Asuka and Cross exchanged painful slams and suplexes onto piles of steel chairs, but none worse than the powerbomb Cross gave Asuka off the ring apron (which prompted a shocked first “Mama mia!” out of new NXT announcer Mauro Ranallo). It was all Asuka could do to steady herself by the count of nine.

The brawl then spilled toward the announce area, where Cross nearly stopped Asuka with a swinging neckbreaker on the floor. More objects came into play, including a ladder that both Superstars dazedly scaled. Situated high above the NXT Universe inside Full Sail University, Asuka snatched on a facelock and suplexed Cross off the top of the ladder, sending both women crashing through the commentary desk below. Amid the wreckage, Asuka crawled to her feet as the referee shouted “Nine!” 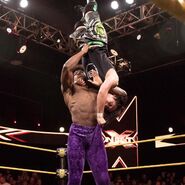 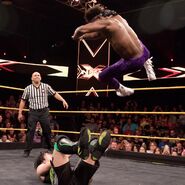 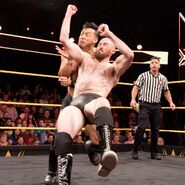 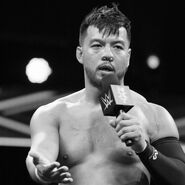 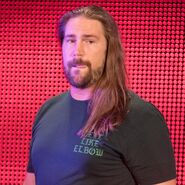 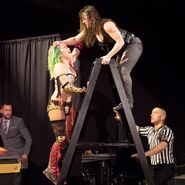 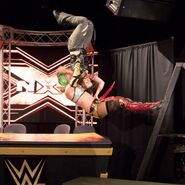