The June 25, 2012 Edition of RAW is a Professional wrestling television show of the WWE's RAW brand, which took place on June 25, 2012 at Allen County War Memorial Coliseum in Fort Wayne, Indiana.

Before Raw SuperShow, Jack Swagger begged Interim GM Vickie Guerrero for a United States Championship Match. Only after Swagger got down on his knees, did Vickie finally give in and agree to a match. Later, the Interim GM kicked off Raw by announcing the first match of the night would be a Three-Way Elimination Match.

Vickie Guerrero kicked off Raw SuperShow by reminding the WWE Universe that the WWE Board of Directors appointed her Interim GM. Her first order of business was announcing a Three-Way Elimination Match.

With AJ watching from a backstage monitor, WWE Champion CM Punk, Daniel Bryan and Kane went to war. With Bryan reeling, Punk signaled for the Go to Sleep, but a big boot from Kane thwarted Punk's plan. As the battle waged on, The Big Red Monster went on the offensive. But interrupting his moment was AJ, who came skipping to ringside. Capitalizing on the distraction, The Second City Saint blasted Kane with the GTS to eliminate him. But Bryan quickly swooped in with a kick to Punk's head to seize the victory.

After the match, Vickie announced a No. 1 Contender's Contract-on-a-Pole Match for later in the night between Alberto Del Rio and Dolph Ziggler, with the winner facing World Heavyweight Champion Sheamus for his title this Friday on SmackDown.

After Big Show mercilessly pummeled Brodus Clay's leg into the steel ring post, he was left reeling. But Clay fought back with a headbutt. However, when Clay tried to slam Show to the canvas, things didn't go as planned and he wound up directly under the crushing weight of The World's Largest Athlete for the pinfall.

Adding insult to injury, Show brutally punched Clay in the head as he was being helped away from the ring by WWE officials.

After begging Vickie Guerrero to give him a United States Championship Match, Jack Swagger took on U.S. Champion Santino Marella, who was defending his title for the first time on Raw since April 16. With a hard-hitting DDT followed up with The Cobra, the champion dispatched of Swagger, as well as his hopes of capturing the coveted title.

Following up on a tweet from earlier in the day that he would make an historical announcement, John Cena came to the ring to address the WWE Universe in person. After Cena recalled the fate of former GM John Laurinaitis using a slew of “Star of Wars” references, Chris Jericho returned to Raw and interrupted the Cenation leader. As the two mixed words, Cena revealed his big news. “In order to stop Big Show, for the first time ever, I’m putting myself in the Money in the Bank Ladder Match,” he said.

Following the Money in the Bank news, the Interim GM announced Cena would face Jericho later on Raw for the first time in two years.

Honoring the 1,000th episode of Raw on July 23, Sycho Sid returned to compete. But spoiling his introduction by Lilian Garcia was Heath Slater, who came to the ring first to declare: “I rule the world.” However, Slater paid the price for his rudeness when he came face to face with the 317-pound former 2-time WWE Champion. Although he last competed on Raw on June 9, 1997, Sid was in fine form and stopped the music of the One-Man Band with ease.

As Dolph Ziggler and Alberto Del Rio fought tooth-and-nail for possession of a championship contract in a No. 1 Contender's Contract-on-a-Pole Match, World Heavyweight Champion Sheamus emerged and halted their match with major news. He revealed that Interim GM Vickie Guerrero decided that The Celtic Warrior would defend his title against both competitors in a Triple Threat Match this Friday on SmackDown.

With kicks flying, a ring full of Divas mixed it up with each other and Interim GM Vickie Guerrero. As the battle waged on, AJ eliminated Divas Champion Layla. But when Vickie thought she eliminated AJ, the spitfire Diva brought the fight to the GM. In the end, AJ shoved Guerrero from the ring to capture the summertime win.

Raw kicked off with AJ explaining her feelings for Kane, Daniel Bryan and CM Punk, saying it would be best if they all went their separate ways. Later, after coming to ringside during the night's 3-Way Elimination Match, she got an earful from Kane, who said it would be best if they stayed away from each other. Later, she apologized to Punk for what happened in his match and addressed their future.

In their first match in two years, Chris Jericho appeared to have John Cena right where he wanted when he had him locked in the Walls of Jericho. But before a winner could be declared, Big Show charged in and dropped his massive frame down on the Cenation leader, ending the bout in a disqualification. Next, with the match over and Jericho out of the ring,The World's Largest Athlete brutalized Cena with a chokeslam, followed up with a Colossal Clutch. Only after Cena turned blue in the face, did Show finally release him from his grasp and drop him in a lifeless heap in the ring.

Champions to compete in Ladder Match 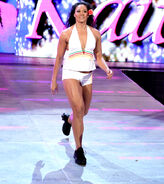 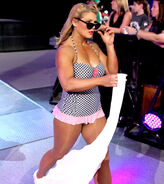 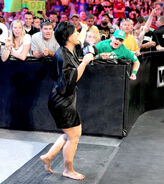 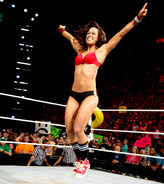 Retrieved from "https://prowrestling.fandom.com/wiki/June_25,_2012_Monday_Night_RAW_results?oldid=1558992"
Community content is available under CC-BY-SA unless otherwise noted.