ORLANDO, Fla. — The huge challenge laid out to Finn Bálor by Shinsuke Nakamura was all the NXT Universe could talk about since last Wednesday. While Bálor seemingly accepted the challenge on the spot, nothing formal was set up for the showdown. NXT General Manager William Regal promised to change that tonight.

But before that, Tye Dillinger took to the ring to right his ship after two losses to Andrade “Cien” Almas in as many weeks. His opponent this week was NXT newcomer Oney Lorcan, a tough, hard-hitting fighter out of Boston. The Perfect 10 seemed a little unsure of himself in the early moments, leading to Lorcan taking control, eventually rocking Dillinger with a diving European uppercut.

However, with the NXT Universe willing him on, Dillinger bounced back and pummeled Lorcan into the corner, staggering the Beantown brawler with a devastating superkick that nearly won the battle. The Perfect 10 stayed on Lorcan, attempted to connect with a series of 10 punches in the corner. But, Dillinger hesitated after the third punch, allowing his rival to shove him off the ropes. Lorcan charged at The Perfect 10 and connected with a flipping neckbreaker to earn his first victory between the yellow ropes! Having suffered his third straight loss, Dillinger looked devastated after the bout, which left the NXT fans wondering if The Perfect 10 is still worthy of his lofty moniker.

The positively infectious No Way Jose returned to the ring this week, looking to continue his undefeated streak against Josh Woods, an amateur wrestler with MMA experience. Woods tried to knock Jose out with a series of vicious elbows, but there was no stopping the fiesta, as Jose rallied and put Woods away with his patented cobra clutch slam to keep his record unblemished, allowing him to get back to dancing.

However, Jose's party was cut short by Austin Aries. Backstage before his match, No Way Jose tried to cheer up “The Greatest Man That Ever Lived” in the aftermath of his loss to Nakamura at TakeOver, reminding him that NXT should be fun. Aries seemed to take Jose's message to heart, thanking Jose and shaking his hand. Somewhat reluctantly, Aries joined Jose for a dance party, loosening up as they boogied their way to the announcer's table. However, the mood turned sour as they danced atop Tom Phillips and Corey Graves’ desk, when Aries clobbered Jose with a discus elbow. A furious Aries battered No Way Jose back to ringside and up the steel ramp. Not satisfied, Aries locked on the Last Chancery on the ramp, sending a message to Jose and the rest of the NXT roster that Austin Aries is all business.

Following an enticing confrontation between the two competitors one week ago, William Regal made the official announcement that Shinsuke Nakamura and Finn Bálor will go head-to-head in three weeks on WWE NXT.

However, as Nakamura relished in the honor of facing the “icon of NXT,” Buddy Murphy opted to rudely interrupt hm. As a result, he would have to deal with Nakamura in NXT's main event.

Bayley has been waiting to get back in the ring since Nia Jax put her out of action several weeks ago, forcing the NXT Women's Championship rematch she is still owed to be postponed. The former champion was finally cleared to return to action earlier in the day, and came out of the gates on fire. Despite Deonna Purrazzo's best efforts, there was no stopping Bayley from getting back on track. The former champion planted Purrazzo into the canvas with the Bayley-to-Belly Suplex to get the three-count.

Nia Jax threw everything she had at NXT Women's Champion Asuka at TakeOver: The End..., but still came up short against the seemingly unstoppable champion. Because of that, Jax was more furious than ever as she got into the ring this week against Liv Morgan. The towering Nia imposed her will on Liv from the opening bell, and though the feisty New Jersey native tried to slip out of Jax's grasps, there was little she could do once Nia got a hold of her. Nia picked up the victory after nearly putting Liv through the ring with a powerbomb.

After interrupting Regal, Bálor and Nakamura backstage, Buddy Murphy earned himself a one-on-one battle with The King of Strong Style. Murphy was trying to get his singles career rebooted, having broken up (again) with Blake last week. After absorbing a thunderous kick from Nakamura, the Australian Superstar briefly gained the upper hand with nefarious tactics, but The King of Strong Style could not be overcome.

Using his unorthodox in-ring manner, Nakamura frustrated Murphy. The King of Strong Style weathered all of Murphy's strikes, answering with a smile before clobbering his rival with an overhand right that turned the tides of the bout. Nakamura unleashed a flurry of strikes and suplexes that left Murphy in perfect position for the Kinshasa. The devastating knee strike turned Murphy inside out and allowed Nakamura to win the bout, showing Finn Bálor that he won't be a pushover when they finally meet. 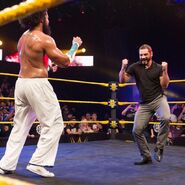 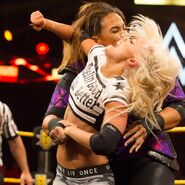