June 29, 2010
The June 22, 2010 Edition of NXT is a Professional wrestling television show of the WWE, which took place at the Verizon Wireless Arena in Manchester, New Hampshire.

Thanks in part to the return of his WWE Pro, The Miz, this week, NXT Rookie Alex Riley continued his hot streak on WWE NXT. As the WWE Pros looked on, the energetic NXT Rookie Percy Watson joined his WWE Pro, MVP, in the tag team match, and dominated The Miz, almost earning the win. But the United States Champion turned the momentum in his favor and hit a Skull Crushing Finale on “Showtime” for the win. With his tag team victory, Riley's record moved up to 2-0, while Watson's record fell to 1-1.

Also, the newest member of the WWE NXT broadcast team, Ashley Valence, informed the NXT Rookies that it's their last chance to make a first impression on the WWE Pros and the WWE Universe. The first NXT Poll is next week! You, the WWE Universe, will vote at 10 p.m. ET next Tuesday for the NXT Rookie you think is WWE's Next Breakout Star. Your vote counts for 50 percent and the Pros’ vote counts for 50 percent when the first NXT Poll rankings are revealed on next week's show. Which NXT Rookie will become WWE's Next Breakout Star and earn a future championship match on a pay-per-view?

Michael McGillicutty added a second win to his undefeated streak with a victory over fellow NXT Rookie, Titus O’Neil. With his WWE Pro, Intercontinental Champion Kofi Kingston, in his corner, the third-generation competitor pinned former footballer O’Neil, who also had his WWE Pro, Zack Ryder, at ringside. It was surely another emotional win for McGillicutty, who told the WWE Universe he called his mother – whose maiden name was McGillicutty – after his first win on WWE NXT last week. McGillicutty's record increased to 2-0, while O’Neil remained winless with an 0-2 record.

With a clear size advantage, the 7-footer, Eli Cottonwood, defeated fellow NXT Rookie, Kaval, who stands significantly shorter at just 5 feet 8 inches. The quick and nimble 174-pound Kaval put up a noble fight against the 313-pound Cottonwood, as his WWE Pros, Women's Champion Layla and her bestie, Michelle McCool, looked on. But Cottonwood simply dominated his much smaller opponent. WWE Pro John Morrison congratulated his undefeated protégé, Cottonwood, after the match, while Layla and Michelle presented Kaval with a personalized pink “Property of Lay-Cool” shirt. With his win, Cottonwood upped his record to 2-0, while Kaval remained winless at 0-2.

While berating Lucky Cannon at the end of last week's WWE NXT, WWE Pro Cody Rhodes told the NXT Rookie he'd be lucky to last five minutes with him. So this week, the WWE Pro put a determined Cannon to the test in a Five-Minute Challenge, meaning he didn't have to defeat Rhodes, but merely last five minutes in the ring with him. But Lucky's luck ran out before the five minutes were up, as the former Tag Team Champion dominated the match and defeated him in just 3:58 with a Cross Rhodes as the WWE Pros looked on.

Before the first NXT Poll next week, the NXT Rookies pleaded their cases to the WWE Pros and the WWE Universe, each explaining why he should be WWE's Next Breakout Star. But NXT Rookie Husky Harris said he wouldn't need 45 seconds to plead his case. The third-generation competitor took a page out of the book of his WWE Pro, Cody Rhodes, and shockingly attacked WWE NXT host Matt Striker, a move that garnered congratulations from Rhodes.

With the first NXT Poll less than a week away, several NXT Rookies did everything in their power to prove to the WWE Universe and the WWE Pros that they have what it takes to become WWE's Next Breakout Star. 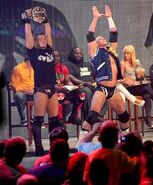 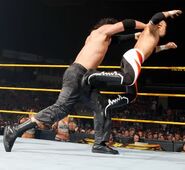