Cleared for action after being sidelined for weeks with a shoulder injury caused by NXT Women's Champion Asuka, Ember Moon was greeted with chants of “Welcome back” as she prepared to face a familiar nemesis in Peyton Royce. Moon showed no signs of ring rust as the match got underway, but interference by Royce's best friend, Billie Kay, allowed Royce to take control of the match and target Moon's shoulder. The underhanded Aussie ran Moon shoulder-first into the ring post and tried to rip the limb out of her socket.

Moon, however, would not be deterred in her comeback match. When Kay again involved herself in the match, this time to help Royce avoid Moon's Eclipse finisher, Moon decided to not limit her attack to just one member of the Iconic Duo. Instead, she wiped out Kay with a cross body block on the floor. The distraction enabled Royce to take control, but Moon fought back and collapsed Royce with a stunning Eclipse, sealing the all-important win and rebuilding her momentum once again.

SAnitY is on a tear, and NXT tag teams are in peril. Gabriel & Uriel Ealy, twin powerhouses from the WWE Performance Center, found that out the painful way against Eric Young & Alexander Wolfe. The SAnitY duo functioned as an impeccable unit, cutting off the ring and making quick tags. The Ealys’ raw strength resulted in bursts of offense, but they were no match for SAnitY's onslaught, which Young & Wolfe concluded with a leaping neckbreaker/back suplex combination for the pin.

Sonya Deville loves a good fight, but as much as Rachel Evers wanted to give her one, Deville just wouldn't let it happen. The MMA fighter-turned-NXT Superstar dominated Evers from the opening bell, kicking her in the corner, sliding a knee into her back and dropping her with a thud on a double-leg takedown. Evers squeaked out a punch to the face, but it only seemed to annoy Deville. “You messed up,” Deville roared before firing uppercuts to Evers's stomach and cinching in a double wristlock for the submission victory.

It might be Bobby Roode's NXT, but Roderick Strong has had enough of The Glorious One's trash talk.

After reports surfaced earlier today of a fight breaking out between Strong and the NXT Champion, video of the incident revealed exactly what transpired between the two: As Roode was taking part in a photo shoot, he taunted Strong, who was passing through the studio area with his fiancée, Marina Shafir, and their infant son. When the NXT Champion asked Shafir if she wanted to find out “what it’s like to be with a real man,” Strong exploded and went after Roode.

Fellow NXT Superstars rushed in to break up the brawl, but that won't be the case on the July 5 episode of NXT, when Roderick Strong challenges Bobby Roode for the NXT Championship in a newly announced title match.

It's hard to tell which blow was the harshest for Kassius Ohno: The collision of expectation and reality, or the wallop that Aleister Black's boot put on his face.

Ohno put himself in the situation of getting clocked and pinned by Black, who remains undefeated in NXT competition on WWE Network. He was out to prove to himself that he's a main player in NXT and, by asking General Manager William Regal to give him a challenge, show Hideo Itami that there's a befitting way to move past setbacks. With Black, Ohno got his wish.

They shook hands and traded holds at the start of the match, revealing their mutual respect hadn't faded since the days that Ohno helped train Black. However, it wasn't long before the intensity kicked up a notch, thanks to a rough chop from Ohno, and NXT's two premier strikers began bludgeoning the spirit out of each other.

NXT's Knockout Artist put Black to the test. He landed big hits and, in between, even dared to mock his opponent. The antics seemed to backfire, though, as Black angrily stomped Ohno. In the end, it was a brutal and quick-moving exchange that ended with Ohno attempting the Rolling Elbow, only to be met by the Black Mass spinning heel kick. It wasn't easy this time, but NXT's serene striker made another Superstar fade to black. 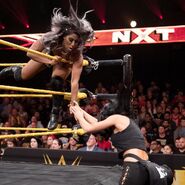 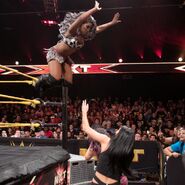 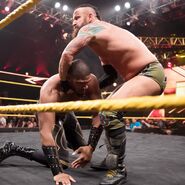 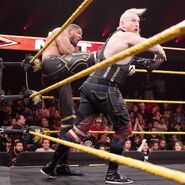 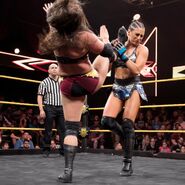 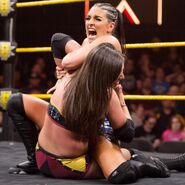 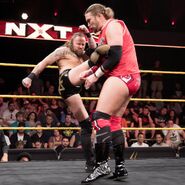