The June 21, 2004 Edition of RAW is a Professional wrestling television show of the WWE's RAW brand, which took place on June 21, 2004 at the American Airlines Arena in Miami, Florida.

The Game played Eugene on RAW, luring him with a smile ... and a sucker punch. But the match wasn't without a few unexpected wrinkles. Eugene deftly countered Triple H's advances, revealing his deceptive power to his favorite WWE Superstar. After a vicious assault, Eugene found a second wind and briefly took the action to his much more experienced opponent. And when Triple H wielded a chair at the urging of General Manager Eric Bischoff, The Rabid Wolverine once again came to Eugene's aid.

But there's strength in numbers. By the time the entirety of Evolution was finished, Eugene and Benoit were out cold — with the Crippler accidentally taking out his own ally in the confusion of the melee.

In other news, Kane continued his trend of breaking up historic RAW moments with destructive appearances. Last week, he crushed Shawn Michaels’ throat seemingly seconds before a rivalry ending handshake with Triple H. This time, the Big Red Monster delivered damning news just before the adoring and pregnant Lita could accept Matt Hardy's heartfelt marriage proposal. Much to Lita's dismay, Kane revealed that he's likely the father — not Matt. And after braving some of the most death-defying matches in WWE history, a distraught Matt could do little more than flee the scene.

Chris Jericho was helped from the ring after a ruinous clothesline from Batista, leaving Edge to battle Evolution alone. Eventually, Edge succumbed after a Batista Bomb and RKO left him bloodied and unconscious.

We also saw the first cut in the $250,000 RAW Diva Search and received an update on HBK's condition. He suffered a crushed larynx at the hands of Kane and will have a difficult road back to active WWE duty. 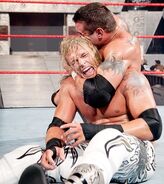 Retrieved from "https://prowrestling.fandom.com/wiki/June_21,_2004_Monday_Night_RAW_results?oldid=1558955"
Community content is available under CC-BY-SA unless otherwise noted.