The June 19, 2007 Edition of ECW was a televised Professional wrestling show by the WWE's ECW brand that took place on June 19, 2007 at the Bobcats Arena in Charlotte, North Carolina. This was Chris Benoit's final WWE appearance before his infamous double murder-suicide the following week. 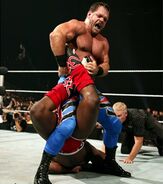 Retrieved from "https://prowrestling.fandom.com/wiki/June_19,_2007_ECW_results?oldid=1535642"
Community content is available under CC-BY-SA unless otherwise noted.