The June 18, 2018 Edition of RAW is a Professional wrestling television show of the WWE's RAW brand, which took place on June 18, 2018 at Van Andel Arena in Grand Rapids, Michigan.

Ronda Rousey didn't win the Raw Women's Championship last night because Alexa Bliss cashed in Money in the Bank and stole the title. So while it wasn't surprising that The Baddest Woman on the Planet stormed the ring in the middle of Little Miss Bliss’ coronation ceremony, her aggression ultimately got the better of her after the champion gloated over the one-two punch of stealing Rousey's spotlight and exploiting her unfamiliarity with WWE rules.

"Overhyped rookie" was the insult that finally drove Ronda to throw hands against anything that moved; not only did Bliss suffer a powerbomb through a table, Rousey also dropped Kurt Angle with a judo throw and belted him with the briefcase after the Raw General Manager tried to keep the peace. Given the outburst, Angle wasn't convinced Ronda "got it" when she insisted she knew how WWE works: Once he caught up with Rousey backstage, the GM handed Rousey a 30-day suspension from Raw as a result of her actions.

As for the championship, Nia Jax (absent from tonight's show thanks to a physical therapy session) has evoked her rematch clause for WWE Extreme Rules, which means Bliss has her hands full for the time being. But Rousey made her motives clear as she exited Raw: She's coming for Bliss once her suspension is up, whether she has the title or not.

Give Seth Rollins credit for doing the honorable thing and reinstating his Intercontinental Title Open Challenge despite a hellacious defense against Elias at WWE Money in the Bank. But The Kingslayer's heart got the better of him, and Dolph Ziggler took advantage of the champion's wear and tear to snap Rollins’ reign and win The Architect's coveted title.

That said, The Architect proved to be a tougher task than the former World Heavyweight Champion expected, even after suffering additional damage to his knee. Luckily for Ziggler, Drew McIntyre, who had been prowling at ringside, was there to make his presence known, leading to dueling roll-ups between champion and challenger. Rollins tried to put Ziggler away with a handful of tights the same way he had against Elias, but The Showoff was just a little bit sneakier, reversing The Kingslayer with a two-handed, tights-assisted pinfall of his own.

When Ziggler mocked the former champion and Rollins lashed out after the bell, McIntyre struck, helping Ziggler drop the deposed titleholder with the brutal Claymore-Zig Zag combo. Rollins would later declare his rematch for next week's show, but the more immediate reaction came in a post-match interview, where the new champion and his enforcer reiterated that they had no interest in T-shirt friendly catchphrases like "Burn it Down" or "It's My Yard" — all they were there to do was win. The Kingslayer has been slain. Long live the Intercontinental Champion.

Bobby Roode's entry into the Men's Money in the Bank Match was nothing short of glorious, but the former U.S. Champion found himself on the wrong end of the highlight reel after he received a 20-foot Coup de Grâce from Finn Bálor that banged up his ribs. That said, The Glorious One didn't miss the opportunity to rally; his win over Curt Hawkins on Raw via a swiftly administered Glorious DDT was decisive and entirely unhindered by the injuries he had sustained. Roode stays in the hunt, while Hawkins’ own goal of snapping his losing streak remains frustratingly out of reach.

Whether The B-Team can match up to “Woken” Matt Hardy & Bray Wyatt in the ring remains to be seen, but there's no doubt they see themselves on the same level as the Raw Tag Team Champions in all facets of the game.

Before the bell rang on Hardy & Wyatt's bout with Heath Slater & Rhyno, Bo Dallas & Curtis Axel appeared on the TitanTron in Deleters cosplay to do their best impression of the Raw Tag Team Champions’ mind-bending messages from beyond. It was a valiant effort, but the champions didn't exactly suffer a taste of their own medicine: The Deleters dispatched Slater & Rhyno with a Kiss of Deletion to The One Man Band in a display of their continued dominance and perhaps delivered a message to their challengers that a Party City beard and Sweeney Todd wig do not Woken Warriors make.

According to Jinder Mahal, one must be committed to change if one is to achieve inner peace. That means his loss to Roman Reigns at WWE Money in the Bank was less a setback than an opportunity for The Modern Day Maharaja to “ride the winds of change” and reset himself mentally and spiritually. Unfortunately for Chad Gable, it meant little to no change physically.

Mahal seemed to have embraced a newly tranquil mindset as he walked to the ring, but the peacenik act vanished in a hurry once the bell rang against Gable, who Mahal claimed was stuck in his own glory days as an amateur wrestler. Gable quickly reminded The Maharaja that he wasn't exactly a pushover with a wild offensive press that ended with a moonsault, but Mahal cut his opponent off with a big boot and a ring-shaking Khallas. When the bell rang, his demeanor softened again; clearly, an enlightened spirit is one thing, but nothing brings inner peace quite like victory.

During the lead-in to the Women's Money in the Bank Match, Sasha Banks and Bayley's relationship seemed to finally be pushing through months of turbulence. And then, Raw happened.

The Boss and The Huggable One didn't just lose against The Riott Squad's Liv Morgan & Sarah Logan in a match that seemed like it would finally seal their newly re-formed friendship, they never quite managed to get on the same page. After Liv capitalized on Logan's interference to pin Sasha with a handful of tights, Banks shoved Bayley to the mat in frustration. And when The Huggable One tried to catch up with Sasha backstage, The Boss spurned her again, leading to a brief but intense brawl between the two former Raw Women's Champions. Bayley tried to get ahold of Banks again as she made her way out of the arena, but The Boss wasn't hearing it. All The Huggable One could do was throw a water bottle at her friend's car as it sped away.

Who's next for Brock Lesnar? If you ask Roman Reigns, it's him. If you ask Bobby Lashley, it's him. And if you ask The Revival, it shouldn't matter.

What began as The Big Dog's attempt to re-establish himself as the uncrowned Universal Champion ended up a confab between Reigns, Bobby Lashley — fresh off his own win over Sami Zayn — and Raw General Manager Kurt Angle, who announced (on orders from Stephanie McMahon) that Lesnar's next challenger would be determined by a multi-person match at WWE Extreme Rules, with Reigns and Lashley as the first two participants. Dash & Dawson took exception to Angle automatically handing an opportunity to the two former champions, challenging them to an impromptu tag team match in order to prove they were just as worthy of the spotlight.

The Revival were so convinced Reigns & Lashley couldn't coexist that they gave away their strategy, but Reigns & Lashley held it together uneasily yet effectively, weathering The Revival's time-honored attack to tee themselves up for victory. Lashley couldn't resist one-upping Reigns in the most passive-aggressive way possible, however, stealing a tag and pinning Dash Wilder with a Spear. Reigns looked understandably stunned as Lashley strutted away, and perhaps a little worried: Not only did Lashley steal his thunder, but there might be a threat loose in his yard after all.

Or, perhaps, two. Less than an hour after Reigns & Lashley notched their win, Elias took advantage of his performance time to float himself as a potential participant in the multi-person match. Either way, the self-dubbed uncrowned champion is facing a very crowded field as he tries to fight his way to the throne.

An impressive Intercontinental Title challenge aside, Mojo Rawley has been searching for his footing ever since coming to Raw in the Superstar Shake-up. He took the first step toward rectifying that this week, battling No Way Jose — a Superstar who embodies the type of fun Mojo used to prioritize above all else. As such, The Dominican Dancing Machine's continued salsa breaks each time he pulled ahead incensed Mojo to the point that he ended the match swiftly and furiously. After the bell, Rawley elaborated on his new mindset and how he hoped it would bring him sustained success in a WWE that was more competitive than ever: “I used to be known for staying hyped. Now, I’m all about staying focused.”

Having sampled life as Braun Strowman's enemy, Kevin Owens came to Raw with the sole objective of becoming his friend. It didn't work, but he can take solace in the fact that he technically won the main event of the show, which teamed Strowman and Finn Bálor against Owens and Baron Corbin, competing for the first time after being named Constable of Raw. (Yes, he wore the vest in the ring — at least for a while).

Unsurprisingly, Owens & Corbin's strategy revolved around keeping Strowman out of the match, though that proved difficult since Owens was practically bandaged from head to toe after Braun tossed him off a 15-foot ladder the previous night. Strowman, who is applying the “go where you want, when you want” aspect of WWE Money in the Bank to all facets of his performance, saved Finn from a 2-on-1 attack and threw him in position for his own tag before trucking Owens through the barricade.

But the collision took Braun out with Owens, and right as Bálor prepared to give These Feet to Corbin, the Constable took advantage of Mr. Monster in the Bank's absence by stranding Finn atop the ropes and hitting him with the End of Days. In a show that Raw General Manager Kurt Angle struggled to get a handle on, Stephanie McMahon's appointed representative did exactly what he was supposed to do: Take matters into his own hands. 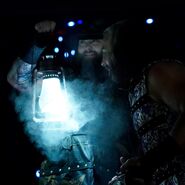 Mojo Rawley vs. No Way Jose

Retrieved from "https://prowrestling.fandom.com/wiki/June_18,_2018_Monday_Night_RAW_results?oldid=1558832"
Community content is available under CC-BY-SA unless otherwise noted.